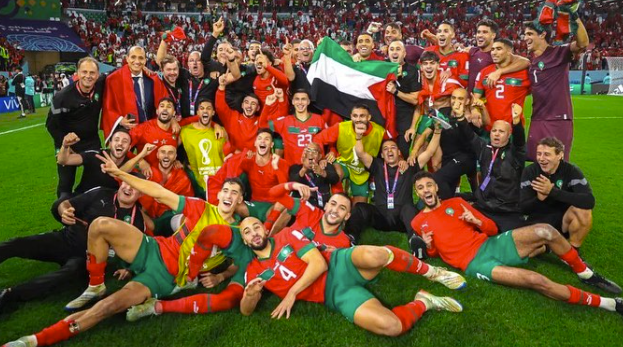 KARACHI: The road to Qatar may have been a bumpy one but the World Cup 2022 has been full of surprises. Underdogs like Saudi Arabia and Japan managed to beat the biggest names in the tournament and the favorites for the title were kicked out early in the competition. Testament to the insanity that has ensued in the World Cup was the qualifier Morocco vs Spain match!

Throughout the 90 minutes of the match, both teams had chances to score goals but none of the chances panned out. The game between Morocco and Spain was a defensive one, to say the least and it went on to extra time without a goal scored. And then, it all came down to the nail biting penalties. It was absolute madness when the Atlas Lions managed to defeat the former world champions in their penalty shootout marking the first time in history for Morocco, and an Arab team to reach the quarter finals.

Amazing. The winning penalty by Hakimi in the Morocco Vs Spain🇲🇦🇪🇸 match. It’s even better with the Arabic commentary. So poetic 🔥🔥🔥 pic.twitter.com/gZWFSSrRXu

What made the win in the Morocco vs Spain match so special were the sentiments shown by the Moroccan team. The team and the fans have shown solidarity with the people of Palestine throughout the World Cup, so much so, they hoisted the Palestinians flag during their celebrations. They did this, despite the fact that their government has ties with Israel.

Morocco celebrates their victory by raising the Palestinian flag.

The Moroccan team didn’t shy away from practicing their religious beliefs either. Before they began their penalty shoot out, the players recited verses from the Quran and after their win, the players prostrated in gratitude.

Surprisingly enough, while most European teams include players who are immigrants, 14 players from Morocco hail from European and North American countries! Achraf Hakimi, who scored the winning penalty, was actually born in Spain but chose to play for the Moroccan team, for the country where his parents were from!

Needless to say, the Morocco vs Spain match was not one to be easily forgotten!