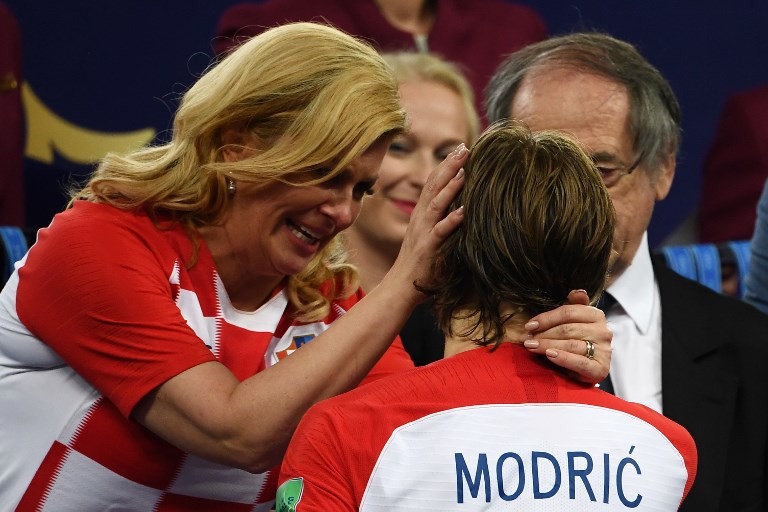 Croatian President Kolinda Grabar-Kitarovic (L) embraces Croatia’s midfielder Luka Modric on the stage at the end of the Russia 2018 World Cup final football match between France and Croatia at the Luzhniki Stadium in Moscow on July 15, 2018. PHOTO: AFP

KARACHI: As you all may know, France became the FIFA World Cup 2018 champion in a nail-biting match against Croatia last night. But despite winning the tournament and having a good-looking president, someone else stole the show. Yes, we’re talking about Croatian President Kolinda Grabar-Kitarović who displayed the utmost affection for her team and won us over in the process.

They may have lost on paper but they won in our hearts 🇭🇷❤️🇭🇷❤️🇭🇷 #WorldCupFinal #croatia pic.twitter.com/z9SsF1k5eo

Take a look at how Twitter reacted to it:

You are the world cup champion for me and many – Madam President !

You have shown how to celebrate a victory and how to celebrate a defeat ! Whenever, there will be a game, we will not be able to forget you ! #Kolinda_Grabar_Kitarović #Croatia #Greetings from Nepal 🙏🙏🙏 pic.twitter.com/InUysS5dZb

And called her the true winner of #FIFA18

They also pointed out how humbly she conducted herself

#WorldCup2018 Respect to @KolindaGK President of #Croatia
-She didn’t miss a single match
-Travelled in economy class
-Always in the stands with the fans
-refused to take any pay for her days not at work.Standing In Rain Without Umbrella Hugging Players To Appreciate Their Game. pic.twitter.com/r2GyxDQ27A

This is beautiful 😘😥
Croatian President wiping Modric's tears is the most heartwarming thing to see after match end.
Sorry #Croatia pic.twitter.com/zicyaQXeW2

They also shared images of the sporting attitude from both Presidents

For me this was the best moment from #WorldCupFinal

The world can be a much better & peaceful place if countries can just hug and hold each other <3 pic.twitter.com/TDatblwiek

Raise your hand if you wish all matches would end like this!