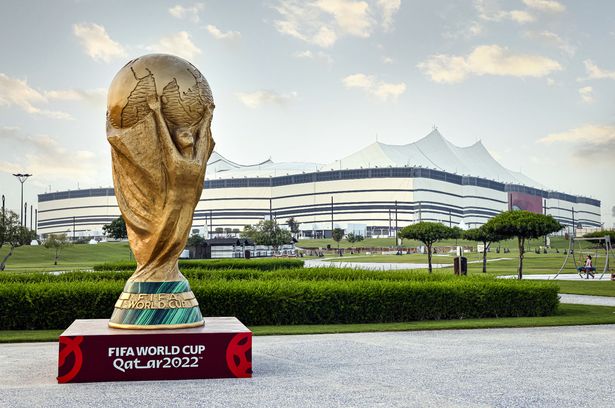 KARACHI: The much awaited FIFA World Cup ceremony finally hit off on Sunday night and people were in absolute awe of the show. However, despite being called one of the best ceremonies of recent times, the road to Qatar’s World Cup hosting has not been without controversy. From alcohol bans and religious inclusion to human rights violations and boycotts, here is a run down of the rocky road to Qatar’s football World Cup.

Qatar has become the first Muslim country to host a FIFA World Cup, much to the shock of many. And it did not hold back when it came to making sure that religion was a major part of the event. Prior to the kick off, Qatar began to strategically place verses from the Quran and sayings of the Prophet around tourist spots.

Authorities made it clear that they would not tolerate LGBTQ+ displays including rainbow colored flags being waved in the stadium. Authorities also were very strictly against revealing clothing and claimed inappropriate attire would be punished with heavy fines.

The most shocking of it all was the alcohol ban. Football fans are accustomed to be allowed to drink in stadiums during matches. However, two days before the FIFA World Cup ceremony and festivities kicked off, Qatar announced the ban despite previously stating they would allow alcohol sales.

Qatar just reversed their decision to sell alcohol which has cost FIFA their $75M sponsorship with Budweiser.

That’s what the FIFA organization deserve after deciding to put the World Cup in Qatar in the first place.

The response to the religious inclusion was diverse. Many felt that religion had no place in sports.

Qatar doesn’t care about religion or ideology. Its hosting of the World Cup is not “Islamic missionary work” as some gullible Muslims try to portray it, nor is it to promote Western ideology in its country. It’s strictly motivated to boost its economy.

Qatar hosting the Worldcup has made me realize how Islam is hated as a religion.The hate is really crazy.

Before the FIFA World Cup ceremony kicked off, there was a bit of back and forth between the FIFA officials about the host country. Ex-FIFA president Sepp Blatter said he regretted allowing Qatar to be the host country, “It was a bad choice. And I was responsible for that as president at the time.” Alluding to Qatar trying to right their human rights violations, he called it a “publicity stunt.”

However, current FIFA president Gianni Infantino did not share the same sentiments. On the eve of the ceremony, Infantino called out the hypocrisy of the West in a scathing statement, “We have been taught many lessons from Europeans and the Western world. I am European. For what we have been doing for 3,000 years around the world, we should be apologizing for the next 3,000 years before giving moral lessons.”

FIFA president Gianni Infantino says the West is in no position ‘to give moral lessons’ to Qatar, adding that European nations should instead apologise for their own histories.

Before the World Cup even kicked off, there was an outcry over what was called gross human rights violations especially where migrant workers were concerned. It’s been 12 years in the making for Qatar to host the World Cup with islands literally being created in Qatar for the tournament. And employed to do just that were migrant workers.

In 2021, The Guardian claimed that 6,500 migrant workers from India, Pakistan, Nepal, Bangladesh and Sri Lanka died in Qatar in the previous ten years. Causes of deaths ranged from workplace accidents, car crashes, suicides and deaths from other causes, including the heat as well as the exploitative conditions under which they were living.

FIFA and Qatar dispute that number. Qatar claimed that only three people died as a direct result of work on World Cup construction sites, and acknowledged the deaths of 37 workers that were “non-work-related.”

Qatar SHOULD be called out for their human rights violations allegations in relation to the World Cup. BUT I also think we should acknowledge that the vigorous way Western media has covered this has roots of racism/anti-Orientalism. Both are valid. It’s not one or the other.

As Britons sat around their screens and turned into BBC with plans to watch the FIFA World Cup opening ceremony, they were shocked to learn that the channel had simply refused to stream the event.

Outrageously disrespectful to Qatar that the BBC didn’t broadcast the World Cup opening ceremony, and instead put out more virtue-signalling guff about how awful it is. If they’re that appalled, they should bring home their vast army of employees & spare us this absurd hypocrisy.

Instead, they chose to call out Qatar for what they believed were wrongs being committed by the country and demanded that Qatar should, “Stick to football.” However, viewers were not convinced and instead went on to call BBC out for their selective outrage.

This is how BBC opened coverage of World Cup 2022. Stark contrast to Fox Coverage in United States. Please take a minute to watch. This is how this World Cup should be contextualized 🙌 pic.twitter.com/36HtKOX26w

The BBC didn’t air Qatars World Cup opening ceremony in protest. Yet just 9 months ago, the BBC aired the Winter Olympics opening ceremony in China, a country literally accused of committing genocide. GTOH with your sanctimony. The epitome of hypocrisy and double standards! pic.twitter.com/zinn6tdhXC

But BBC wasn’t the only one boycotting the FIFA World Cup opening ceremony. Singer Dua Lipa refused to perform during the opening ceremony in retaliation to the human rights violation claims.

“I will not be performing & nor have I been involved in any negotiation to perform. I look forward to visiting Qatar when it has fulfilled it’s human rights pledges.” pic.twitter.com/yaj4DiQnlt

Similarly, Rod Stewart and Shakira also backed out of performing at the ceremony.

Despite the all the bumps along the already rocky road to Qatar, after 12 long years, the World Cup has finally kicked off!