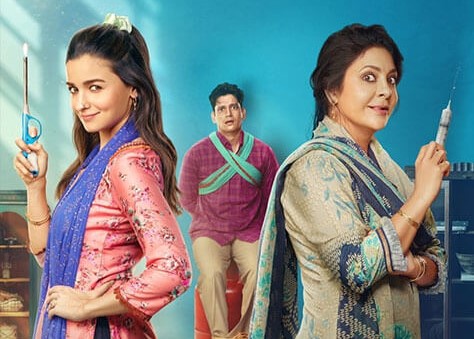 KARACHI: Over the past few months, there has been quite a bit of hype surrounding the new Alia Bhatt starrer Darlings. The dark comedy which also stars Shefali Shah, Vijay Varma and Roshan Mathew is set against the backdrop of a conservative lower middle-class neighborhood in Mumbai. The film is written and directed by Jasmeet K Reen and tells the story of a mother-daughter duo, who find courage and love in trying times. However, while a lot of critics are praising Alia Bhatt for her performance in Darlings which just dropped on Netflix, many have taken to Twitter to call for the movie to be boycotted.

The basic premise of the movie revolves around a young couple Badrunissa Sheikh (Alia Bhatt) and Hamza Sheikh (Vijay Varma) whose love marriage soon turns sour as Hamza begins hitting his wife. His anger flares up on the slightest and most ridiculous of things and he tries to blame his inebriated state. Despite the abuse, Badrunissa holds out hope that her husband will reform. But he doesn’t and one day, Badrunissa and her mother Shamshunissa (Shefali Shah) take matters into their own hands.

Critics might not have thought the movie delivered entirely but they all agreed that it was a treat to watch Alia Bhatt especially in Darlings. But as it turns out, quite a few people do not agree and instead have called for the movie to boycotted. Their major concern is that the movie is promoting domestic abuse against men.

Society : woman is only victim of domestic violence.

They always neglected the violence against the man by woman.

They called out the movie for having double standards.

And they called out the entire industry for being “feminists” like that is a bad thing!

Some claimed the movie was encouraging women to abuse their husbands.

Here’s how to identify toxic femininity traits..👇 #DarlingsOnNetflix (#AliaBhatt first film as producer) shamelessly preaches husband torture on the name of dark humour. So #BoycottAliaBhatt for life and devote your life on positive things pic.twitter.com/SW9rvqkMHE

They even went as far as to call Alia Bhatt the next Amber Heard!

Ironically, it seems as though most of the tweets which are predominantly written by men, miss the point of the movie. The movie is actually about a man who beats his wife up till she hits her breaking point. And the breaking point comes after ages of enduring abuse and giving her husband numerous chances!