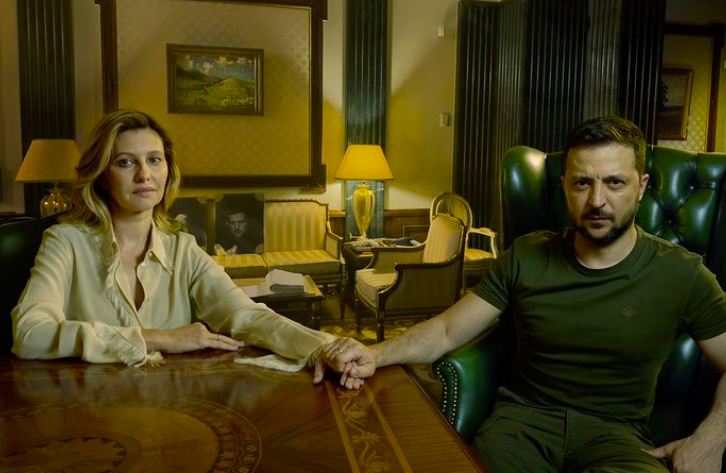 KARACHI: With a war against Russia raging on for over 150 days and countless lives having been lost amidst the conflict, a photoshoot would be really low on the list of things a president needs to be doing. But it seems as though that isn’t the case for the President of Ukraine, Volodymyr Zelensky and his wife, Olena Zelenska who recently posed for a photoshoot with Vogue, despite the war that has been raging on in their country. And so obviously, the internet had a lot to say about the spread.

The Vogue spread sees the president of Ukraine and his wife talk about, “Life in wartime, their marriage and shared history, and the dreams for Ukraine’s future.” It also focuses on Zelenska and the part she has had to play in politics. In one picture, she is seen standing in front of rubble with two armed officials in the background. The caption accompanying the picture reads, “First Lady Olena Zelenska’s role has increasingly turned toward frontline diplomacy. She recently traveled to Washington, albeit on an unofficial, unannounced visit, and met with President Biden, first lady Dr. Jill Biden, and Secretary of State Antony Blinken. There, she also addressed Congress, telling a bipartisan group of lawmakers that she was speaking as a mother and daughter, not just a first lady.”

But the photoshoot did not have the desired effect. Many people took to social media to criticize the President and his wife considering how dire the circumstances in Ukraine are becoming.

How serious is the war in Ukraine?

Fukc this guy. Russia is crushing his “pawns”, bc he obviously doesnt value his service men/women, and here he is posing #VogueMagazine. #UkraineRussianWar https://t.co/M9wxzggAsn

Some criticized the President and first lady for romanticizing the war. The photoshoot was glamourous while war is anything but.

Because war and death are just so damn sexy. #VogueMagazine https://t.co/2bn2dcEDpI

For some, it was hard to digest that the Vogue photoshoot was legit and not a fake post circulating.

Others also dissected the photoshoot politically.

I guess they loved the #ZelenskyWarCriminal #VogueMagazine photo shoot! https://t.co/xfc5rl5DOa

However, not all opinions were against the President of Ukraine and his decision to do the shoot. Some took the opportunity to give credit to his wife.

Personally think it was a great thing to do. She is one rocking but serious lady, on her own & side by side with her husband.
By releasing this in #VogueMagazine it put Ukraine in front of a new demographic, & whether feminism or PR, it’s sparked off alot of discussion on here.👌

The war in Ukraine rages on and as of late, the Russian forces are concentrating on capturing Southern parts of Ukraine.