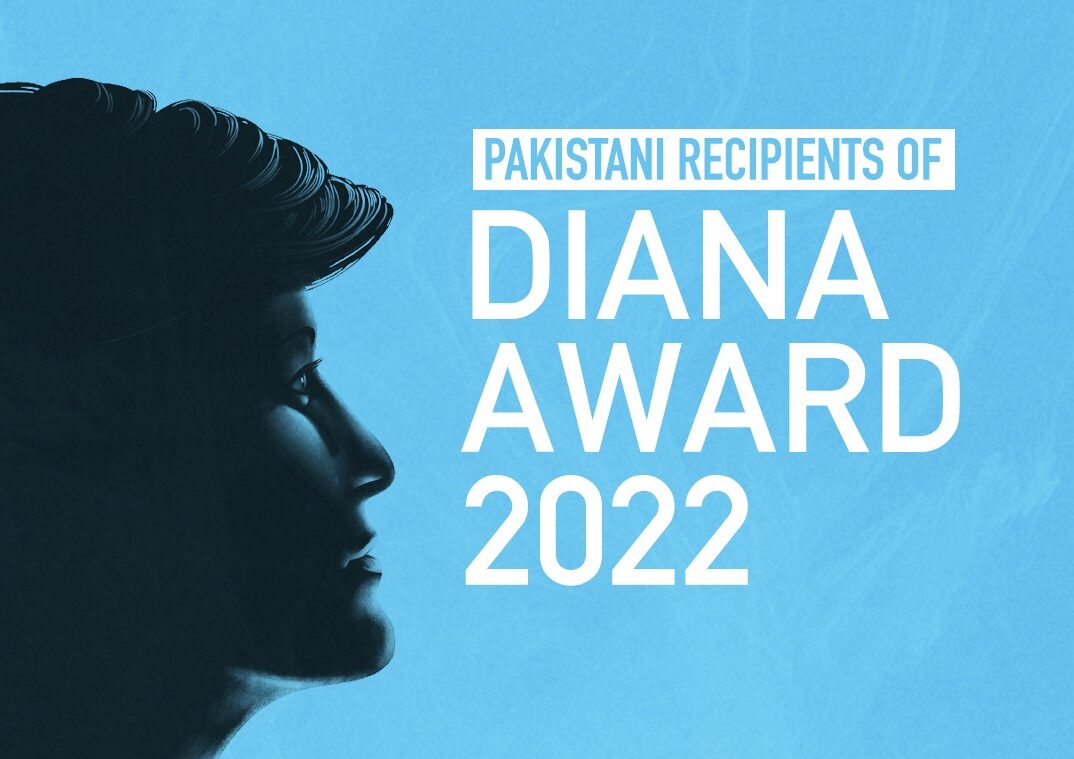 KARACHI: Ten young Pakistanis were globally recognized and won the Diana Award for the positive change they worked to bring about in their communities which has a long term, lasting impact. The group of young leaders are all under the age of 25, the youngest being just 18 years old.

The Diana Award is awarded to, “Exceptional young people (who) have demonstrated their ability to inspire and mobilize new generations to serve their communities and create long lasting change on a global scale.” Out of the ten Pakistanis to receive the Diana Award, 6 awardees are residents of Pakistan, one hails from Azad and Jammu Kashmir and three are oversees residents.

The youngest of the group is 18-year-old Iqra Bisma. Iqra received the award for providing mental health support by establishing a “listener’s society”. As per the Diana Award introduction, Iqra “has also played leading roles in more than 15 National and International Organisations on the SDGs and conducted more than 100 youth engagement sessions during the pandemic including virtual gatherings, meetups, events, workshops, and awareness sessions to promote the positive use of social media. “

A post shared by Founder “Speak To Lead” (@iqra_bisma_official)

Ramna Saeed is a 20-year-old leader from Gujranwala. She was recognized for her work against sexual harassment, “as well as shining a light on the issues, she has also set up mentoring sessions for the victims and survivors of domestic abuse and bullying and helped create safe spaces for girls and women in her community to speak about sexual harassment and bullying they experience on a day-to-day basis.”

Faryal Ashfaq, the 22-year-old girl from Lahore received the Diana Award for her fight against gender-based violence in Pakistan. From the mere age of 17, Faryal established, “her own NGO, ‘The Mirror’, to fight against gender-based violence in Pakistan. She reached out to survivors of assault, working to give them the confidence to speak out about their experiences and come to terms with how they felt when forced to keep their silence. As the first such platform for young girls in Pakistan, ‘The Mirror’ was to become a voice for those who felt unheard, unsafe, and not believed.”

22-year-old Sukkur resident Muhammad Amir Khoso received the award for providing food, water facilities, education and other basic necessities to people living in underprivileged areas of Pakistan, “where he has provided food to 700 families during the pandemic, installed water pumps in arid regions, and risked his life during lockdown to provide sewing machines to underprivileged women, enabling them to earn a sustainable livelihood. He also opened two free schools to provide education, food, books and uniforms for children living in slum areas, even in the face of opposition and threats to his personal safety from people who did not want the school built.”

Alizey Khan from Lahore was awarded the Diana Award for her efforts in combating food poverty. “In 2016, Alizey established the ‘Ruhil Foundation’ to combat food poverty, delivering 5,500 monthly food parcels and 10,000 meals. She soon realised the multidimensional nature of poverty and felt providing food alone wasn’t enough to break the cycle. She pivoted to also focus on education and shelter, raising over $150,000, as well as financing 200 weddings, distributing 600 sanitary pads, providing 1,100 blankets in winter, disbursing 1,000 interest-free emergency loans and providing monthly stipends to 25 transgender people and widows.”

Arqam Al-Hadeed, the 21-year-old young leader from Muzaffarabad who currently resides in Leeds, England has been recognized for his efforts in trying to unite all races, religions, and cultures. “He was the British Muslim Award 2019 winner from across the country while his efforts for promoting human rights were awarded by the Prime Minister of Pakistan. He is now running dozens of local, regional, national, and international campaigns while raising thousands of pounds for these causes. “

Moiz Lakhani, a 20-year-old from Karachi currently living in Toronto, Canada was awarded for his efforts in empowering women and teaching them self-defense techniques. “After winning the ‘Global Impact Challenge’ and being presented the award by the representative of the UN Secretary-General, he was awarded seed funding and mentorship to implement ‘Ninja Girls’. ‘Ninja Girls’ is a non-profit which empowers women and girls by teaching them self-defence techniques they can use to defend themselves in emergency situations, combatting the issue of sexual/physical abuse.”

23-year-old Aiza Abid was recognized for being a life-long advocate for children’s rights. She began her journey in 2013 when she founded her non-profit organization ‘Aiza’s Teddybear Foundation’ with a mission to provide physical and emotional support to children in need around the world. “It has since grown into a movement that, to date, has repurposed hundreds of thousands of donated items to provide books to help under-resourced youth create their own home-libraries; good quality clothing to low-income and refugee families; toys and crafts to children residing at local homeless shelters; and warm sweaters and backpacks filled with school supplies for students in need globally.”

Sikander (Sonny) Khan aged 23 was awarded the Diana Award for providing clean water in most affected areas of Pakistan. The then a low-income first-generation college student “founded ‘Paani’ with other Pakistani-American students to build water wells in Pakistan, one of the countries most affected by lack of secure access to clean water. The group has grown from Sonny and his roommate Arhum selling donuts on campus to fund ‘Paani’s’ first well, to raising over $3.1 million from over 20,000 donors to build over 9,300 water wells that serve more than 732,500 villagers. ‘Paani’ has also donated $500,000 in medical supplies to COVID-19 clinics, distributed over 1 million meals, and built schools for refugees while galvanizing thousands of youths globally through community-based awareness.”

Needless to say, this group of young Pakistanis made us proud and not just because they won the Diana Award but for their efforts to help make Pakistan a better place!

#InternationalCharityDay: Here’s how you can help those in need in Pakistan