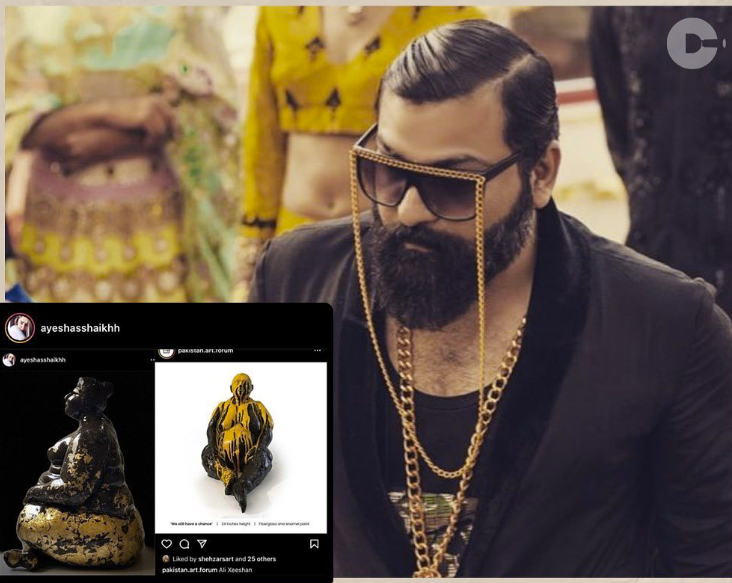 KARACHI: Renowned fashion designer Ali Xeeshan has been accused of copying another artist’s artwork designs. The artist in question, Ayesha Shaikh, took to Instagram to call the fashion designer out and wrote, “I don’t know if I should be infuriated or feel proud about my artwork being plagiarised by fashion designer, @alixeeshantheaterstudio.”

Shaikh went on to explain how she began “working on the concepts of body shaming and self-love back in 2018 for my thesis project, where I developed sculptures portraying my personal experiences.” She detailed how her artwork was featured in the Indus Valley thesis show back in 2019 and then, in Koel Gallery in 2020.

When she was first alerted about how Ali Xeeshan had artwork designs similar to hers in his art show earlier this year, Shaikh gave him the benefit of doubt but then things took a bad turn, “I thought it to be mere coincidence at first, but the messages kept coming in, from viewers of my art shows as well, which made me realise that the resemblance was uncanny! In not one, but several of his artworks he had displayed at his show!” She claimed that the final straw was when “one of my colleagues tried convincing me to take action by trying to show me @alixeeshantheaterstudio‘s IG posts again, but found them to be removed! That’s when I was completely convinced something to be fishy!”

The reason for publicly calling out the designer was for Shaikh to “spread more awareness within the artist community, for things like this to not be overlooked, and to take action against anyone who tries to take advantage of any of our fellow emerging artists, by plagiarising their work or not giving them credit for it.”

Ali Xeeshan is yet to comment on the matter at hand.