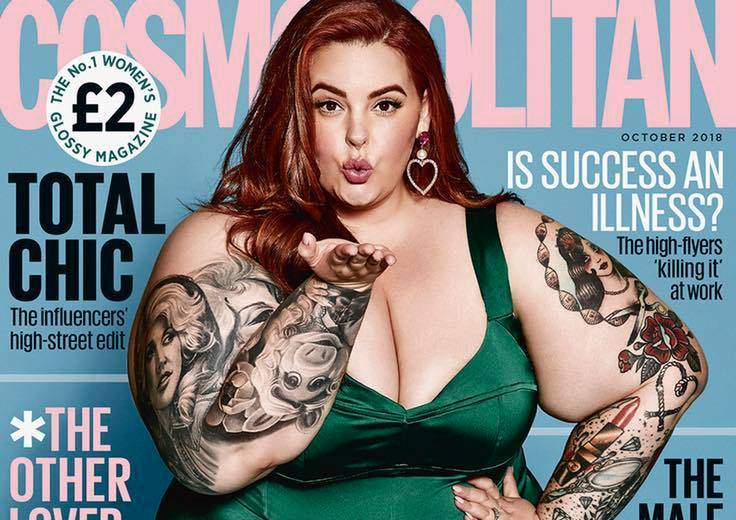 KARACHI: What exactly is it about a woman’s body that everyone is so quick to claim ownership of ? Whether it’s the way her body looks, or the way it feels or what it means to the opposite sex, everyone has a lot of concerns about the female body. Unsurprisingly, Tess Holiday is being attacked for exactly this collective ‘concern’ of our society. The plus size supermodel was chosen as the cover girl for Cosmopolitan magazine this month and naturally, there are two very strong reactions to it. The first is support for the magazine’s decision to promote body positivity and support for Tess for making it there.

Phew, I’m literally a COSMO GIRL!! Can’t believe I’m saying that! 😭😭 Thank you @cosmopolitanuk & @farrahstorr for this incredible opportunity 🙏🏻 If I saw a body like mine on this magazine when I was a young girl, it would have changed my life & hope this does that for some of y’all 💕 Issue hits stands 8/31! 🎉🎉🎉🎉 Photo by the incredible @wattsupphoto #effyourbeautystandards

The second is ‘concern’: people are worried that her appearance on the cover means that obesity is being promoted and glorified. And naturally, a woman who is overweight must obviously be unhealthy or sick. Right? Wrong.

dont get me wrong i love body positivity but tess holiday is like unnecessarily overweight and its showing us all that we can be unhealthily overweight like alright. (please dont attack me i didnt ask for it)

So let’s get one thing straight about Tess Holiday. Despite the fact that she is overweight and apparently looks unhealthy, we can’t really come to that conclusion because guess what, the girl works out, that already makes her more healthy than half the inactive people sitting on their bums and commenting on her pictures.

Secondly, who came to the conclusion that overweight = unhealthy while skinny = healthy? There isn’t any one correct way to look ‘healthy’. Just because someone is thin doesn’t mean they’re in great shape. Sometimes people have medical conditions that do not allow them to be conventionally thin while others may be overweight and simply not give a damn.

Also, why is ‘health’ the yardstick for a fashion magazine? Can’t unhealthy people be fashionable and feel good about themselves?

An app that has nearly 50k downloads was dumb enough to steal photos of myself & two other plus size women & use them for this nonsense.🙄 I’m sharing this because I wanna address a few things. First of all, the fact that anyone thinks it’s ok to market this to ANYONE is appalling, but like, come on y’all 🤦🏻‍♀️ Secondly, why is @instagram not regulating the sponsored content like this? In a world of paid content, flat tummy teas, appetite suppressing lollipops (so many 🙄) its important for me to tell y’all that I have & will never partner with a brand or do paid content unless I genuinely use it or would recommend it to my best friend. I’ve been offered crazy amounts of money to sell y’all all kinds of things like teeth whitening (that doesn’t work), weight loss products (that are dangerous), etc., but that’s me- to each their own 💁🏻‍♀️ Lastly never let anyone make you feel like you need to alter your appearance or who you are. You are enough. You are worthy of love in your current body, whatever that body looks like. As for this bogus app, my lawyers will be sliding in your DM’s boo✌🏻#effyourbeautystandards

Let’s just cut through the bullshit and call out this so called concern for what it really is – we are simply uncomfortable looking at overweight women, and men, and will come up with excuses for why their bodies make us uncomfortable.