Pakistani dramas and the quest of a perfect bahu 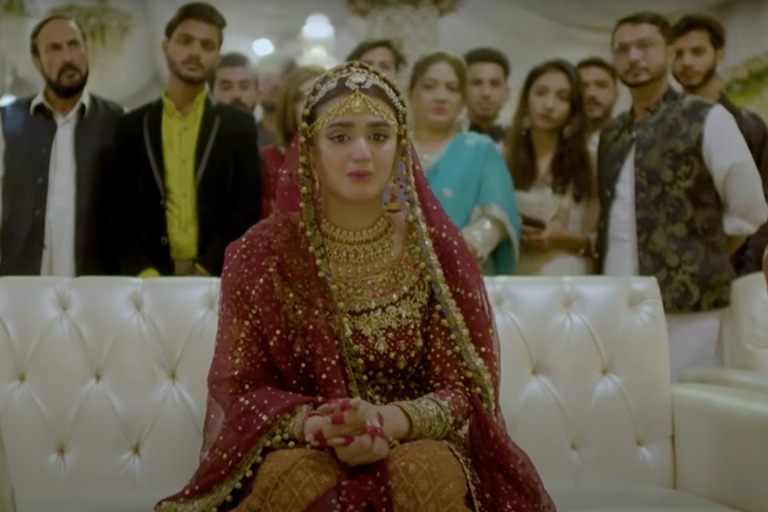 KARACHI: About a decade ago, Pakistani women started asking drama writers to pen female characters they can relate to. They asked for characters who are part of the workforce, who are not in constant conflict with their susraals, characters that are not shown to be busy scheming against each other.

What drama writers apparently heard was that we were asking them to give us female characters that set up unrealistic standards for women all round. Make them the perfect homemakers, make them the perfect employee and, to top it all off, make them conform to typical beauty standards including wearing immaculately ironed cotton dresses that are never out of place, even when they have just woken up.

Enter: the perfect bahu, the overworked, underappreciated woman who does no harm and has no agency over her life or money. The most recent example of such a bahu is Muntaha (Hira Mani) from the drama ‘Yeh Na Thi Hamari Qismat‘.

The drama is a classic Akbari/Asghari tale revolving around two sisters who end up marrying two cousins. The twist? Muntaha was supposed to marry Yasir but some bizarre twist of fate leaves Yasir married to Alishba, the younger sister. Muntaha left, quite literally, at the alter ends up marrying Ayan.

Quite typically, Ayan (Muneeb Butt) only married Muntaha because his father literally asked him to do it in front of hundreds of people, even though he was interested in Alishba, while his phuppo ki beti Sania was interested in him. And to think that we haven’t even reached the most ridiculous bit of the show yet.

Because Ayan and his family saved her ‘izzat’, Muntaha now feels indebted towards them and decides to be the perfect bahu, take over the kitchen and give her saas a break from her years of toil. Why the mother-in-law was toiling alone while she had a grown daughter of her own is a question that we haven’t gotten an answer to and probably never will.

She also decides that her mother-in-law’s continued pressure for a grandchild is her own burden to bear even though it is Ayan who does not want children. The saddest bit about the situation is that Muntaha knows her self-respect is being jeopardized in this situation and yet she continues her self-destructive behaviours.

In this day and age, when women are trying to break out of convention and break barriers, to show a character like Muntaha on prime time television is a disservice to all womankind. It puts women under pressure to constantly be better even though they are doing their absolute best. It gives prospective susrals unrealistic expectations about what it would be like to have a working woman be their bahu. It gives men unrealistic expectations about how relationships work and gives them hope that doing even less than the bare minimum can be enough for them to be ‘happily married’.

Having such characters on TV means that the already difficult uphill battle women are fighting in this country for basic human rights, for changing norms, for the acknowledgement of their sacrifices becomes even more difficult.

To top it all off, Muntaha has been contrasted to her own sister who is shown to be extremely ill-mannered, who does not know the first thing about running a house, who is driving her nice in-laws up the wall with her behaviour. The contrast between Muntaha and Alishba is intrinsically telling audiences that if you’re not like Muntaha, you’ll be seen as Alishba (played by Aiza Awan). You’ll be seen as badtameez and pushy and you asking for your legitimate rights would be seen as an act of rebellion. So don’t you dare try and be a woman with a voice. Don’t be a woman with a backbone or you’ll be thought of as Alishba.

The other two young women seen in drama serial ‘Yeh Na Thi Hamari Qismat’ are practically useless. Maano (Hafsa Tariq Butt), Ayan’s fully grown good-for-nothing sister is busy hanging out with a shady man while Sania (Aamna Malick), the phuppo ki beti, does nothing but sleep or sit around all day waiting for Ayan to show up. Both these characters are annoying and are present on-screen for one sole purpose: to make Muntaha look like a gift from heaven.

If there was one piece of advice we could give Hira Mani, it would be to diversify her characters and not play different renditions of the same role over and over again. She has great acting potential and can do so much more than being a conformist goody-two-shoes in every drama.

Overall, pitting a ‘nice’ sister against one that is blatantly ill-mannered is setting up an unhealthy and unrealistic standard for women to achieve. Mothers-in-law watching shows like these expect their bahus to be angels all the time. As if, saying ‘qubool hai’ thrice means that they have lost the ability to stand up for their own rights and to say no when they are asked to do more than their due.

As a woman who works and also runs a family, watching the likes of Muntaha sometimes makes me laugh, other times fills me with rage, but not for one second does it make me wish that this was the hill I die upon.