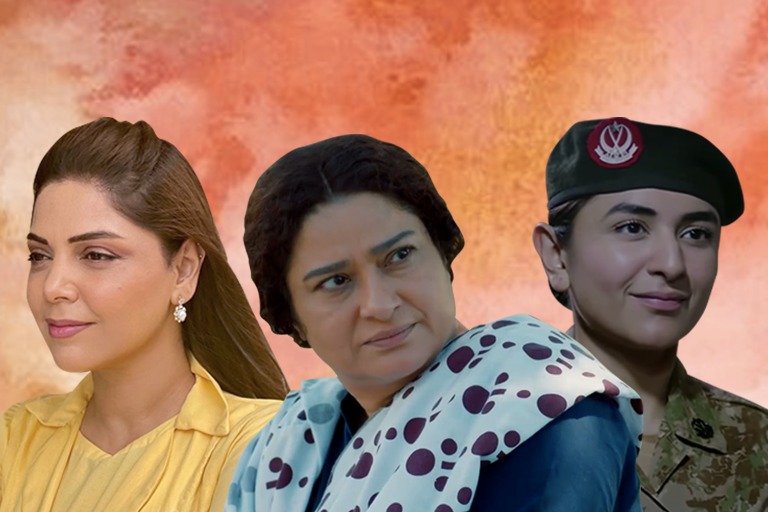 KARACHI: Safe to say, audiences are tired of watching women get abused on screen. Be it dramas like Aitebaar that expect women to prove their worth to their husbands or shows like Main Aisi Kyun Hoon that demean women for the way they look, viewers yearn to see strong women on screen. However, not all hope is lost. Certain female characters continue to save grace. Be it powerhouses like Sania Saeed, Sajal Aly or Yumna Zaidi, or simply the strength of characters like Mehru, here are five onscreen women that we are currently inspired by.

Sang-e-Mah has a sensitive storyline. At the heart of the drama is an act of violence against women, Ghag. The Pashtun practice is a way form of forced marriage for women. While one may expect women in the drama to be portrayed as helpless victims, one particular character shatters all such assumptions. Zarghuna, brilliantly portrayed by Sania Saeed, needs no man to protect herself or her daughter. Be it riding a horse, hunting animals, or going after men who exploit women, Zarghuna does it all. She is a woman who can stand her ground and instills the same teachings in her daughter as well.

It is not easy being a woman in this country. Let alone a widow who wishes to spend the rest of her life doing something other than constantly mourning her husband’s death. Mehru from Dobara faces a similar fate. Essayed by Hadiqa Kiani who continues to impress audiences with her acting, Mehru got married as a child. Her husband, who was much older than her, ripped her off her childhood and innocence. When he passes away, Mehru discovers freedom like never before. Standing up against society and even her own children, she finds the strength to be herself. Mehru ends up marrying a man much younger than her because they care for each other. After years of losing herself, Mehru is finally on a journey of self-discovery and we love every bit of it.

Yumna Zaidi has been an audience favourite for years. As an actor, Zaisi has given us some memorable performances. Her role in the ongoing serial Sinf-e-Ahan is no less of an inspiration. Shaista belongs to a conservative family in Peshawar. She is super intelligent but girls from her community are married off before they can even think of making a career for themselves. Going into the army is unimaginable altogether. However, Shaista breaks all barriers as she goes after her dreams. She also eventually wins over her father and grandmother, two people who opposed her admission the most. At the training, Shaista continues to be a source of positivity, humour and perseverance for her fellow Lieutenant Colonels and audiences alike.

It is not easy standing out when Sajal Aly and Yumna Zaidi have been roped in as lead characters for a show. But Uzma Hassan as Kanwal makes sure that we give her equal attention. Her character starts off as that of a salty sister-in-law. She is clearly unhappy with her in-laws, including Azka (Yumna Zaidi). But then, she transforms into the most caring bhabi one could have. After her husband passes away, Kanwal takes it upon herself to earn for her family. She also stands against her own cousin to save Azka from a marriage she knew was a bad idea to begin with. Kanwal breaks also stereotypes of an evil sister-in-law and surprised audiences in the best way.

Truth be told, Sajal Aly aces any character that she dons. The actor also ensures that her characters leave a mark on the viewers. Shanaya from Ishq-e-Laa left many inspired and heartbroken at the same time. Sajal Aly’s character in Sinf-e-Ahan, Rabia, shatters even more stereotypes. Rabia is relatable because of the struggles she faces at home. In spite of belonging to a well-educated family, Rabia is taught to view marriage as her most important goal. Even though her brother (Usman Mukhtar) is in the army, her family ensures her that Rabia could never achieve the same. Except that she does. With her hardwork, determination and discipline, Rabia manages to earn herself a spot at Pakistan Military Academy (PMA).