The six and a half minute long music video starring Maya Ali went on for one lamha more than necessary. 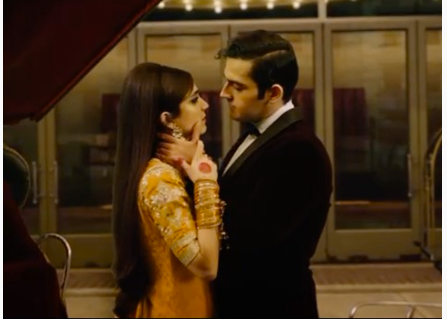 KARACHI: For over a week Azaan Sami Khan has been teasing fans with glimpses from the video of his new song titled ‘Ik Lamha‘. The six and a half minute long video which is directed by Mohammed Ehteshamuddin and stars Maya Ali opposite Azaan Sami Khan promised so much more than it could offer.

Azaan Sami Khan had centered the music video for the new song ‘Ik Lamha‘ as an ode to the 60s in Karachi. He called it a “a love letter to the city I grew up in.” But watching the video, between the Gatsby-esque theme and burlesque styled dancers, there was very little of Karachi relevance in the video. Which makes sense because the images Azaan Sami Khan shared as inspiration for the music video of the new song weren’t entirely Karachi based.

While the visuals for the video are praiseworthy and the fusion between the Qawali styled music and electronic guitar were something unique, everything else was overwhelming.

While both Maya Ali and Azaan Sami Khan looked great and they had great chemistry on screen, their love story wasn’t anything unique. Maya Ali spent most of the video in tears and Azaan Sami Khan spent a good part of the music video catching tear drops. Between the shots of the Gatsby themed burlesque dancers, the dramatic intimacy between the lead actors, and the fusion of genres, it becomes difficult to focus on what Azaan Sami Khan is actually singing and there was no explanation for the doomed love story. Azaan Sami Khan’s deep soulful voice drowns out in the midst of the music and becomes even more difficult to focus on while we’re trying to figure out what’s happening on screen. Out of the entire six and a half minutes, perhaps the chorus is the only memorable part of the song because it’s loud and clear.

While Azaan Sami Khan had created quite a hype for the release, unfortunately the new song fell flat. While the song and video aren’t terrible, they aren’t very memorable or something we would have on repeat.