As the girls are selected for the next step in their journey, the episode offers insight into their welcome back home. 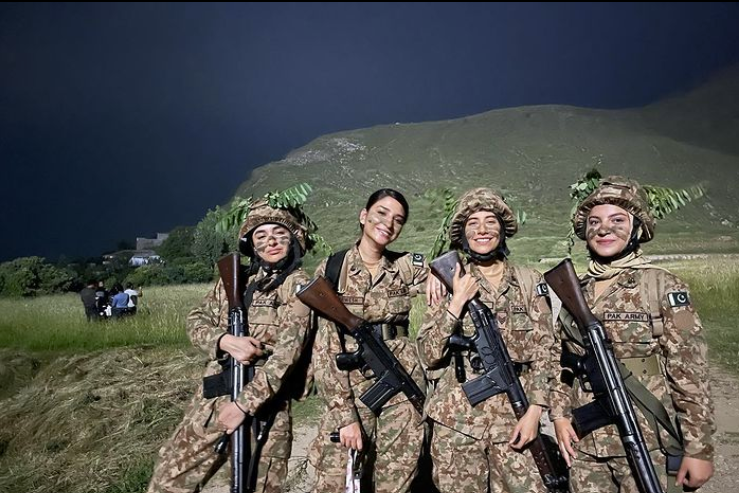 KARACHI: Sinf e Aahan is quickly becoming a fan favorite amongst audiences and with episode 5 the drama proved that the entire focus isn’t just on the army life but also offered an insight into the lives of the girls. As the six lead characters are selected for the next step of their journey into the army, they have one pitstop to make and that is back home. Sinf e Aahan episode 5 focused on the reactions of the families of each of the girls and while some made us laugh and some warmed our hearts, some reactions also broke our hearts and also offered a warning of trouble brewing.

Last week’s episode ended with the inevitable face off between Shaista and her father. For those who don’t remember, Shaista (Yumna Zaidi), who belongs to an uber conservative Pakhtoon family had snuck out in the middle of the night to be able to go give her army admission test. While most would have expected her father to have disowned her for the supposed shame she brought to the family for sneaking out, much to everyone’s surprise her father could not have been prouder.

The only person who needed to be won over was Shaista’s dadi. The old woman is hard not to like because we can all relate to having a grandmother like her and despite the fact that she’s old and set in her ways, she still offers Shaista her blessings.

Not to mention that Shaista’s family offered humor with Shaista’s cousin Wali Mohammad, trying to justify not making it past the test with excuses of needing a source to pass. Watching both father and son’s shock at hearing that Shaista passed made us all laugh.

All homecomings weren’t all that sweet though. Pariwash (Ramsha Khan) made her family proud by getting into the army but unlike the rest of the girls, there was no proper celebration for the Balochi army recruit. Not because they aren’t proud of their daughter but because her father fears the reaction of the head of the tribe.

Despite their best efforts, the news leaks and it seems as though the sardar might be a hurdle in Pariwash’s way.

Rabia and her family have been extremely relatable throughout the show and continued to be so in Sinf e Aahan episode 5 as well. While Rabia (Sajal Aly) isn’t too worried about adjusting in the army, her family doesn’t share the same optimism and spare no opportunity when it comes to pulling her leg. Between jokes about her running away from Kakul in a number of days and concern about who will marry her if she hurts herself during training, the whole interaction is wholesome and relatable to a great extent. Which is what makes the drama so great, we see a bit of ourselves in each of the girls and their families.

Speaking of Rabia, we also get a glimpse of the past and what may have contributed to her fight with Mahjabeen (Kubra Khan). We learn that Rabia wanted to set her brother up with her best friend and by the looks of it Mahjabeen was also inclined towards Daniyal (Usman Mukhtar) but the question still remains: what went wrong?

Unlike the rest of the girls, we didn’t get to see a heartwarming display of affection for Mahjabeen (Kubra Khan) and considering her messed up family life, it comes as no surprise. But rather than focusing on her strained relationship with her parents, Sinf e Aahan kept Mahjabeen’s section of the drama on a lighter note in episode 5.

As Mahjabeen packs what looks like a whole lot of unnecessary stuff, her house help mulls over how she always wanted to join the army or marry an army man but since she didn’t manage to do either she’s living vicariously through Mahjabeen. Only her new wishes include Mahjabeen getting the Nishan e Haider so that all the important people can visit Mahjabeen’s house and she can make tea for them. When Mahjabeen reminds her getting the award would mean dying, the maid doesn’t seemed fazed at the possibility. The exchange was hilarious and Kubra Khan had the best expressions!

We finally get our first introduction of Nathmy Parrera (Yehali Tashiya) in Sinf e Aahan episode 5. The Sri Lankan army recruit joins the cast as someone who wants to be able to fulfill her father’s dreams. As she sits and talks to her mother, they reminisce about how much her late father would talk about the PMA. We also learn that she also has another agenda and that is to find her father’s long lost friend Mujahid. Despite the strong bond between the two men, they somehow lost touch and Nathmy wants to be able to meet him and find out why that happened.

But perhaps the most heartbreaking welcome home was Arzoo’s (Syra Yousuf). While her family is elated at their daughter’s success, Noraiz (Asad Siddiqui) is on a mission to tear her down. Between emotionally blackmailing her to choose between him and the army, to reminding her of how her financial situation left her with limited options, he really does know how to damper the mood. To top it off, while he’s making Arzoo feel bad about her success and drop in the idea of moving abroad with him, his parent’s are clueless of the relationship between the two. Watching the transition of Arzoo and her mother’s excitement about his parents visiting to the disappointment when they learn Noraiz is a commitmentphobe, was heartbreaking in the least. Here’s to hoping Arzoo tells him what we’re all thinking and that’s: boy, bye.