Sinf-e-Aahan off to a promising start 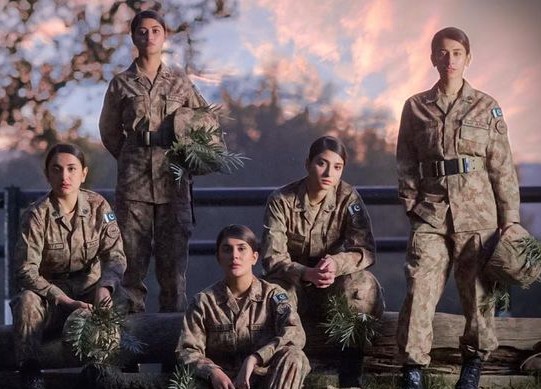 KARACHI: After teasing its audiences for weeks in advance, Sinf-e-Aahan finally aired episode 1 of the show on November 27. And to the excitement of fans, it featured five of the leading ladies as the first episode worked around establishing each character’s background story. There is no doubt about the fact that the episode was an exciting watch. It was specially refreshing to see a narrative putting women at the forefront from the very first scene. But that’s not to say that the episode was flawless.

The opening sequence are brief shots of the five women of steel while ‘Pehchaan Tu’ runs in the background in Zeb Bangash’s melodious voice. What doesn’t sit well with the scene, however, is why it features three shots of Sajal Aly. In two of the shots, she can be seen wearing a tracksuit, perhaps catching a breath during her run, while another shows her decorating a cake. With all other actors getting one shot each, Sajal Aly’s sequence does not blend in well with the introduction.

Episode 1 of Sinf-e-Aahan also marks the cities that every woman comes from. When introducing Mahjabeen Mastan (Kubra Khan) from Islamabad however, the scene is a rather abrupt one. While Mahjabeen sits on a swing, scrolling through her tablet, Ali Rehman shows up out of nowhere, wondering if she would be interested in going to an Atif Aslam concert with him. The scene ends as abruptly as it begins once Mahjabeen says yes.

After the first few minutes, however, there is little about the show that can be criticised. Yumna Zaidi as Shaista Khanzada from Peshawar is an entertaining character. Zaidi does a great job at the pashto accent along and manages to make her audiences laugh in the more humorous scenes. Audiences also see Meruub Ali as Shaista’s younger sister, and Ali’s appearance allows her to look like a mere teenager. Ramsha Khan as Pariwesh Jamal from Balochistan also does justice to the Balochi accent while coming across as an ambitious and cheerful girl.

In Arzoo Daniel (Syra Yousuf) we see an innocent girl, with the character’s aura matching perfectly with that of the actor’s. Arzoo is soft spoken, responsible and very much in love with a man (played by Asad Siddiqui) who is not ready to commit.

Perhaps, the most relatable character so far has been that of Rabia Safeer (Sajal Aly). Rabia is an intelligent, well-educated girl whose ambitions are out down by cultural limitations. Instead of a talented girl, her parents see a daughter who needs to be married off as soon as possible. While Rabia’s brother (Usman Mukhtar) thrives as an army officer, she sits at home wondering if she will ever have the time or opportunity to have a successful career as well.

What is particularly interesting about the storyline so far and the fact that each of the five women want to go into army is how diverse their interests are. Be it Mahjabeen’s wish to be a lawyer or Arzoo’s desire to be a teacher, these women are probably going to end up in different departments yet under one flag. How their stories bring them together will be interesting to see.