Mashal, Mehreen and much needed closure

With only one episode to go, the female leads finally have a conversation that allows them to understand the other's behaviour and reflect on their own 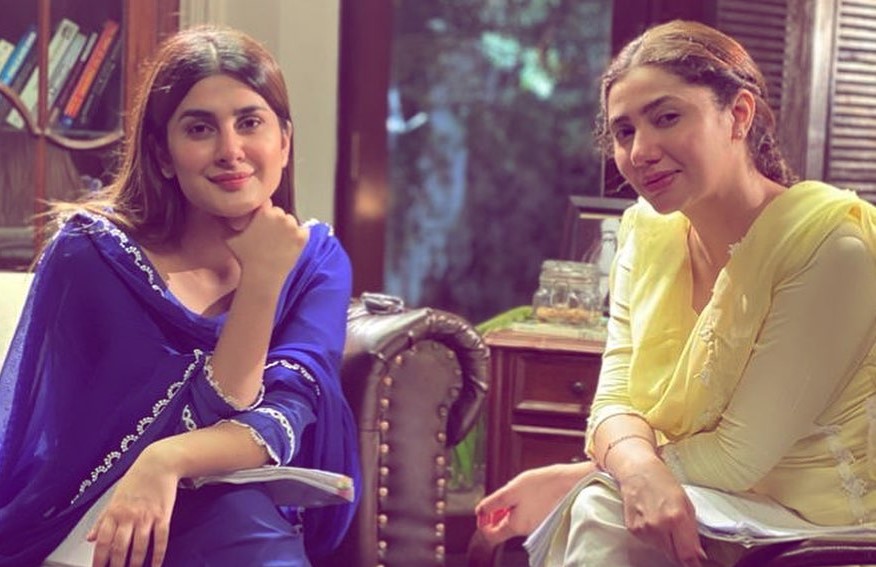 KARACHI: When drama serial Hum Kahan Ke Sachay Thay began, we had concerns about the drama pitting women against one another, like so many of our shows do. We were specially bothered by the fact that Mashal (Kubra Khan) and Mehreen (Mahira Khan), two strong headed, independent women were fighting over a man who was clearly confused. However, with episode 21 that aired on December 26, Hum Kahan Ke Sachay Thay has finally given its characters and viewers the closure that they needed.

In the second last episode of the show, Mashal and Mehreen finally get to have a one-on-one conversation. What starts off as an argument ends up in the two women becoming friends, forgiving the other for what has passed. In a heart to heart dialogue, Mashal and Mehreen openly tell one another what gave birth to the negative emotions they feel for one another. They don’t hate each other, instead, both are in awe of the other. Mashal has always been compared to Mehreen, always made to feel inferior while Mehreen continues to be envious of all the worldly possessions that the former has.

Mashal and Mehreen finally get to know what the audience figured out long ago. The problem does not lie within the two of them, their contempt for each other has a bigger reason behind it. The way that the two have been conditioned and the comparisons with which they have had to live with resulted in them hurting one another. It was also never about Aswad and who ends up with him. It was only about beating the other person, regardless of the prize at the end.

Episode 21 of Hum Kahan Ke Sachay Thay was clearly a special one for Mahira Khan as well. Taking to her Instagram, Khan shared a heartfelt note about the very conversation between Mashal and Mehreen. “This scene… It is the heart and soul of HKKST.. at least for me. I remember reading it and thinking – This will be interesting – two women who have been pitted against each other their whole lives, sit opposite each other and talk. Rarely do we see that on our screens. Talk about their vulnerabilities, their childhood, their take on life and how it unfolded for them, what went wrong and all the time they have lost just because of what was fed to them,” she wrote.

Khan also shared how it was particularly difficult for her to stay in character during the scene for the actor wanted to cry for her co-star and all that the other character has been through. But as Mehreen, she had to reflect a very different state of mind. “I remember wanting to cry seeing Kubra, but as Mehreen I didn’t know she was going to die.. so I had to still act a bit angry a bit weary of her, still not trust her fully. But when I’d get out of character I just wanted to hug Mashal. There is no one I’d rather have sitting there except for her,” Khan shared for her costar.

The particular scene from the second last episode has been receiving praises from audiences as well, who seem to feel as much for Mashal as Mahira Khan does.

It’s also important to note how a lot of issues between Mehreen & Mashal came from their elders with comparisons and judgements. Elders still do this in some families and they don’t understand how it can affect a child growing up. It needs to stop #HumKahanKeSachayThay

Cried for these two, especially for Mashal, she wasn't born evil, her mother & people around her made her so, 'cause not everyone's strong enough to blockout the words feeding into their minds. So be careful with your words it may become poison for others!!#humkahankesachaythay pic.twitter.com/Uwb84frnCx

I have forgiven all mistakes of #humkahankesachaythay because of yesterday's Mehreen Mashal scene! 😍 I'm Glad @TheMahiraKhan you did it ❤ for this scene! What an important scene and drama it has turnout to be.

What an episode of HKKST. Both the leading ladies nailed it but this episode belonged to @KubraMKhan . The expressions, the dialogue delivery; Kamaal🔥🔥🔥
What a tragic fate Mashal's character had. That last hug had me sobbing 😭#humkahankesachaythay #Kubrakhan #mahirakhan pic.twitter.com/ITcZEcsgzs