With her son's wedding festivities in full swing, many were curious to see what Maryam Nawaz would wear. Between her choice of colors and designers, the politician did not disappoint at all 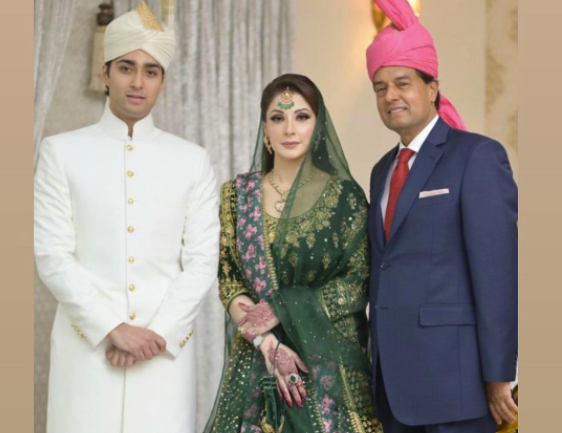 KARACHI: Love her or hate her, there’s no denying that Maryam Nawaz has a great sense of style. With Junaid Safdar’s wedding festivities in full swing, everyone was curious to see what Maryam Nawaz would be wearing at her son’s wedding. And she did not disappoint. Here’s a look at all her wedding looks that has everyone raving.

Maryam Nawaz kicked off her son’s wedding festivities by opting to wear a simple white suit with silver work on it. By the looks of it, the shirt and dupatta are plain and most of the silver embellishments are centered around the sleeves. Sporting matching bangles and a necklace, Maryam Nawaz completed her look with a bold red lip which added a bit of color to her look.

This was perhaps one of the most talked about looks that Maryam Nawaz chose for her son’s wedding and people had a lot to say. For the mehndi, Nawaz opted to wear a lehnga choli designed by Indian designer Abhnav Mishra. Unlike her previous look, she chose to go all out and wore a much heavier outfit. In true Abhnav Mishra style her light blue clothes were full to the brim with his signature mirror work. Even her dupatta, which she wore over her fishtail braid which was adorned with flowers, had mirror work on the borders. Considering how heavy the work on her clothes were, she kept her makeup and jewelry light sans her smoky eyes.

Over the years, Maryam Nawaz has made it clear that she’s a huge fan of the Pakistani designer brand Elan. And so, it comes as no surprise that the politician chose an Elan outfit for her son’s wedding.

Going down the traditional route, Maryam Nawaz, with her hair in a bun secured in a halo of flowers, wore a yellow customized Elan dress. A long kameez with heavy embellishments was paired with a sharara. Designer Khadija Shah took to her Instagram stories to share a full length picture of her creation for Maryam Nawaz. 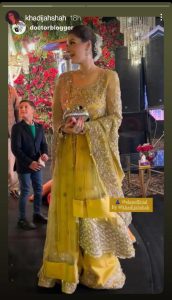 If there is one thing that Maryam Nawaz has shown us is that she isn’t one to shy away from wearing all sorts of colors. And she did so by wearing a hot pink saree to one of the numerous wedding functions. She paired the hot pink banarsi  saree with a matching bold lip and statement gold jewelry.

Maryam Nawaz experimented with differennt shades of pink during her son’s wedding and also wore a peach colored embroidered Saira Shakira ensemble. The shirt was embordered and the dupatta had a unique floral print. Not only did she sport a dark lip color with the outfit but she also wore a cute necklace that looked like a collar with a bow attached to it!

We’ve all seen the clips of Maryam Nawaz singing during a wedding event and wondered which designer the politician was wearing. But what made the outfit standout wasn’t her clothes but rather her jewelry. She wore Saira Shakira for a second time but opted for a much simpler design and the reason being was that she paired her simple clothes with her mother’s statement jewelry.

With so many gorgeous outfits worn during the course of the wedding functions, many were curious about what Maryam Nawaz would wear on the main function of her son’s wedding, the baraat. As always, she did not dissappoint and this time to chose to wear Nomi Ansari on the big day. Sharing the full lentgh picture of the outfit on his Instagram page the designer wrote, “Handcrafted especially for the special lady, Maryam Nawaz looks regal in a bespoke Nomi Ansari emerald green velvet lehnga and choli.”

Now all that’s left is to see what Maryam Nawaz will wear on the grand finale, the Valima!

Here are our favourite celebrity bridal looks from 2020

Nomi Ansari is the official designer for AirSial crew uniforms