Head designer Khadijah Shah has also responded to the backlash 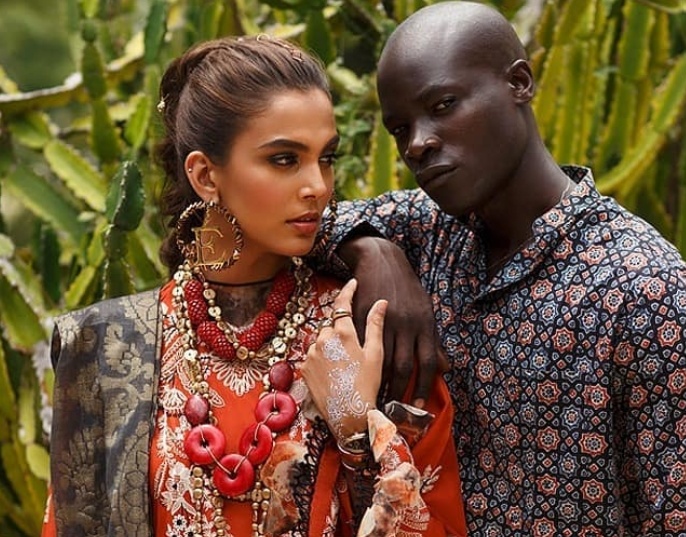 KARACHI: Elan’s lawn campaign for 2020 has been subjected to a lot of backlash and controversy while being applauded at the same time. Featuring Mushk Kaleem and Kenyan model Gabriel Ford, Elan’s campaign “gives out a message of acceptance and racial harmony,” according to head designer Khadijah Shah.

“We show an interracial couple discovering an island in Africa.The island itself has been ravaged by terrorism in recent years, and bringing the focus back on its beauty will prove to be beneficial for locals.”

The Internet is divided over the photos. Many have lauded the move, saying it’s a relief to see a brand focusing on diversity and featuring a dark-skinned model at a time when Eurocentric notions of beauty are the widely accepted norm. 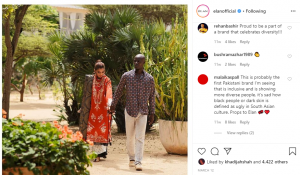 The first picture of elan 2020 lawn campaign comes out on 10th march. On 1st june people realise elan is targetting blacks and mocking lamu culture? Take a break and appreciate the racial neutralisation elan and @khadijah_shah has promoted! 🙏 pic.twitter.com/8sHKv67Hx9

On the other hand, people are calling out the brand for being  racially insensitive, and the campaign is being accused of cultural appropriation. Cultural appropriation is when one adopt elements of an outside, often minority culture, including knowledge, practices, and symbols, without understanding or respecting the original culture and context.)

Why are Pakistani brands so incredibly tone deaf? really using black people as props for their photos to sell their lawn collection when there is an entire fucking movement going on in the US at the same time. pic.twitter.com/HKBvPrtHsN

Every few years we have brand campaigns which are designed very poorly. They intentionally glorify customs/cultures in backgrounds of photoshoots and then deny it. #Elan 's campaign is not only derogatory in its visuals but their defense shows no hint of humility. pic.twitter.com/3d8qvDNXKU

Other criticism coming Elan’s way is regarding the timing of the images, with several people saying that it seems performative and opportunistic of the brand to feature a black model at a time when #BlackLivesMatter movement is trending worldwide due protests that have erupted across the US against the death of George Floyd, an unarmed black man killed by a police officer.

who the hell runs elan's social media is this the way to handle stuff in any kind of circumstance let alone in these times after posting an Instagram campaign that is dripping in exotification pic.twitter.com/mb5K3XUaCu

The images were first released in March and the campaign is continuing this month. Khadija Shah says they had to pause because of Covid-19 but are restarting the campaign as they are launching the collection in a week.

The designer took to Twitter to explain the thought behind this year’s campaign.

The Elan campaign gives out a message of acceptance and racial harmony. We show an interracial couple discovering an island in Africa.The island itself has been ravaged by terrorism in recent years, and bringing the focus back on its beauty will prove to be beneficial for locals.

There has been no adoption by Elan of any African cultural or religious symbols. Our Kenyan Model Gabriel Ford is dressed as a cosmopolitan male, there is no depiction of any African religious or cultural persona by him or by the female model @mushkkaleem