Shoaib Akhtar resigns, walks off from set of Game On Hai 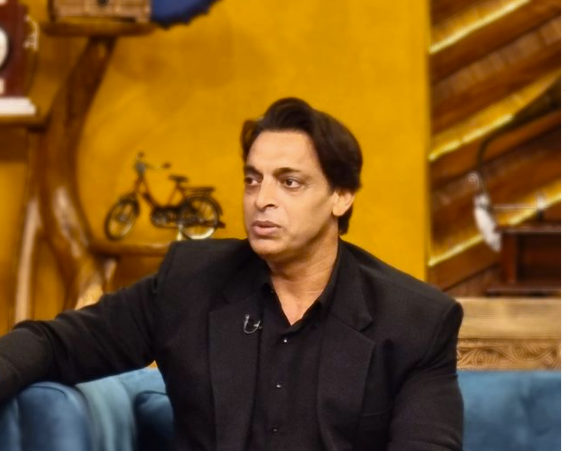 KARACHI: While spirits were high and everyone was celebrating Pakistan team’s five wicket win against New Zealand, drama was brewing on the sets of PTV’s Game On Hai. Famed cricketer Shoaib Akhtar was a part of the panel that was invited on the PTV show to analyze the match but it ended with a war of words between him and the host Nouman Niaz which escalated and ended in Akhtar resigning on air and walking off the set. Here’s what went down last night.

Shoaib Akhtar was part of the PTV Game on Hai panel which included Sir Vivian Richards, David Gower and Sana Mir who were invited for a post match analysis. Things started to get a bit rocky when Akhtar laughingly asked Niaz what he was trying to ask and then went on to question him, “Are you lost?” when the host wasn’t able to answer Akhtar as quickly as he expected. Then things took an ugly turn when Akhtar sidetracked the question and began praising the Man of the Match Haris Rauf. Akhtar also praised the Pakistan Super League team Lahore Qalanders and their coach Aaqib Javed for discovering and supporting Rauf. In the midst of his praise, Niaz interjected and said that instead Shaheen Shah Afridi was the product of U19 cricket. Akhtar had to reiterate he was talking about Rauf.

And that’s when things turned sour and Niaz accused Akhtar “You’re being a little rude and I don’t want to say this, but if you’re being over smart, you can go. I am saying this on air.” The show cut off for a break soon after the war of words. After the show resumed, things were still uncomfortable for the host.

Eventually Shoaib Akhtar announced that he could no longer continue and would be resigning from the PTV show, “My apologies for this but I am resigning immediately from PTV sports as I have been insulted and treated badly on live television in front of the nation,” he said. Much to the shock of viewers, Niaz continued to stick to the script without waiting for Akhtar to leave or even calling for a break.

I am in shock. How rude was @DrNaumanNiaz with our pride and living legend @shoaib100mph @fawadchaudhry should take notice of this nonsense attitude live and that too in front of foreign players.#ShoaibAkhtar #DrNaumanNiaz ,🙌 pic.twitter.com/rTtO3UCt6Y

Shoaib Akhtar took to Twitter to defend his decision to walk off. He claimed that he was to leave the show without any “rhyme or reason” and called Nouman Niaz “obnoxious.” Akhtar went on to say that after the break he tried to smooth things over with Niaz but to no avail which led to him walking off.

Multiple clips are circulating on social media so I thought I shud clarify. pic.twitter.com/ob8cnbvf90

There has been an flurry of support for Akhtar who agree that he has been wronged.

Very sorry to see the clip of Nauman Niaz insulting our national hero @shoaib100mph on PTV. Shoaib is a true hero and will always be. I cant believe Dr Nauman acted this way with an International celebrity in such a rude manner. Unbelievable

Extremely shameful episode between #NaumanNiaz and #ShoaibAkhtar. You just cannot treat a superstar like this. Utterly disappointed.