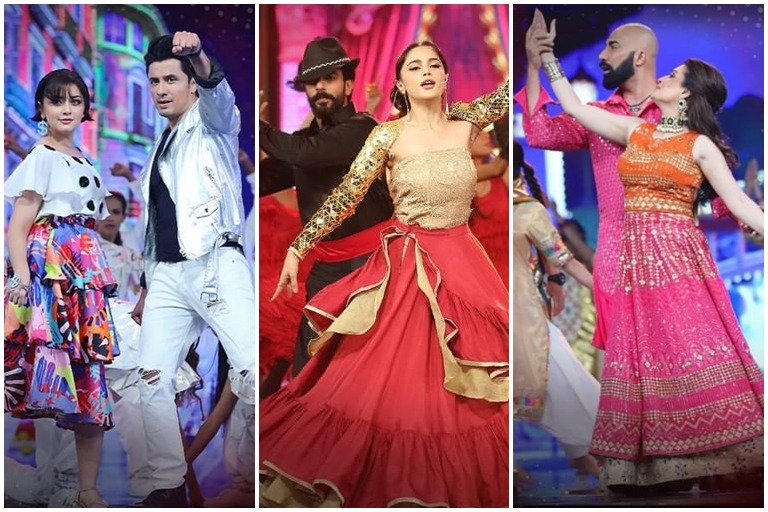 KARACHI: A couple of months ago, desi Twitter was filled with memes about the outfits worn by our celebrities and artists at the red carpet of the Hum Style Awards. After watching the full show that aired on September 18, however, it became clear that Hum Style Awards 2021 were more than just a fashion disaster. Someone earlier said that the ceremony was more of a dress rehearsal for the actual event and upon watching the Awards, the statement made more sense than ever.

The event began with a powerpacked opening performance by Abdullah Siddiqui and Risham Faiz Bhutta. And honestly, that’s where it should have ended. It was refreshing to see a young and talented artist like Siddiqui open the show for an otherwise mainstream ceremony while Bhutta impressed audiences with her strong vocals.

Risham Faiz Bhutta’s outfit for the performance was as loud as her vocals but the singer pulled it off with her confidence. Watching her keep the hairstyle and accessories post-performance, however, was a rather distracting sight. Perhaps one reason that the camera kept coming back to her while she was seated was because there was not much to look at otherwise. The hosts for the evening, Ali Zafar and Urwa Hocane, seemed to be forcing humour into their scripts, an element that is deemed necessary to make award shows enjoyable. Hocane was in her element when it came to introducing guests on stage while Zafar’s involvement in the show remains questionable altogether.

Perhaps the most awkward thing about the entire show was how ‘Style’ remained a source of confusion for many. Categories like ‘Designer of the Year (Demi couture)’ required Urwa Hocane to simplify the term for her co-host while the category for ‘Retail label of the year (Apparel)’ was something that even Hocane did not fully understand. The confusion may have been faked by the hosts for comic purposes but it did make one question why Hum TV was hosting style awards in the first place? That too, powered by Kashmir Cooking Oil, another brand that has nothing to do with the fashion industry.

Of course, many of these shows are hosted for publicity and fame, a strategy which was obvious in the number of times Hum TV, Sultana Siddiqui and the Duraids were thanked for ‘bringing everyone together once again’ (during a very dangerous time, might we add?) A couple of people also expressed how Hum TV had become ‘family’ for them, leaving viewers expecting a ‘Star Parivaar’ inspired performance where a single channel has an entire theme song and an award show named after it.

If there is one person who perfectly represented the mood for Hum Style Awards 2021, it was Alizeh Shah. Performing with Ali Zafar on some of his most famous tracks, the actor looked as uninterested as one can be. Shah’s body language truly felt like she was rehearsing for the performance after a tiring day on set. The choreography was also a little boring given how energetic songs like ‘Item Number’ truly are but Zafar seemed to have ten times the enthusiasm that Shah had. The performance might as well have been a solo by the singer for Alizeh Shah added little value to it, if any. Maya Ali who was a part of the original video for ‘Item Number’ could be seen grooving to the song with more energy than Shah had on stage. Maybe the actor was bored, or maybe she is just not a good dancer.

Aima Baig, too, performed at the Awards with yet another questionable choice of attire. HSY and Resham’s dance performance was perhaps the least torturous. Even though the tracks they performed on were old, the routine was sweet and the pair had good on-stage chemistry. HSY proved yet again how he is more than just a designer as he stepped out of his comfort zone in a bright pink kurta shalwar while Resham brought her evergreen grace to the stage.

Overall, the Hum Style Awards were rather awkward and came across as forced during a time when they could have been delayed or gone digital. Will the upcoming award shows learn from their mistakes and make more responsible choices? Viewers will find out soon.