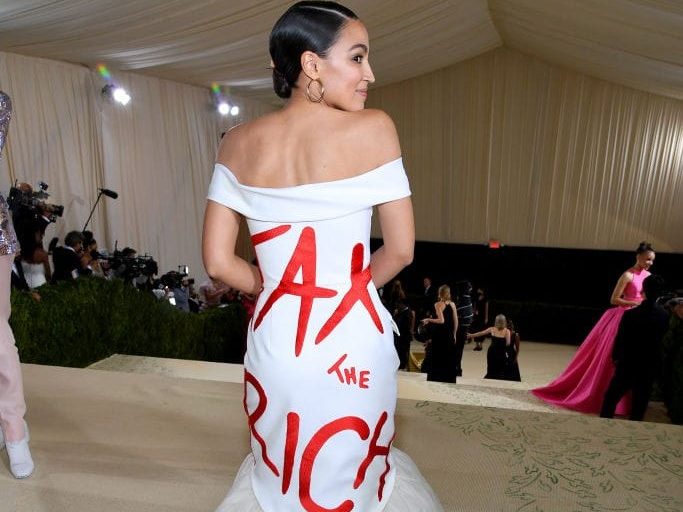 KARACHI: As the Met Gala 2021 took place in New York on September 13, several celebrities and public figures caught the audience’s attention with their outfits. Some were successful in standing out and making a statement with their clothes while a few others became targets of numerous trolls and memes. One person who particularly received criticism for her dress and her participation in the Met Gala was Alexandria Ocasio-Cortez (AOC). The American politician and activist showed up at the Gala sporting a white gown with ‘Tax the Rich’ printed in red at the back.

AOC definitely saw the criticism coming for in an Instagram post in which she announced her designer, Aurora James, ‘a sustainably focused, Black woman immigrant designer,’ she also explained how “BEFORE anybody starts wilding out – NYC elected officials are regularly invited to and attend the Met due to our responsibilities in overseeing our city’s cultural institutions that serve the public. I was one of several in attendance.” AOC also stated that her dress was ‘borrowed’.

Social media, however, was still not sold on AOC’s participation in the fashion event of the year and called her out.

Few things are more tone-deaf than @AOC attending the #MetGala in a “tax the rich” dress. This party is full of clowns. It’s embarrassing.

why didn’t celebrities have to follow covid safety guidelines at the #metgala? @AOC, a ticket to the met gala is $30,000. eat the rich? you’re part of the rich pic.twitter.com/lL2lgteiak

The price of a ticket for Met Gala is $35,000 & $275,000 for a table. AOC wearing a ‘tax the rich’ dress whilst enjoying the rest of the event doesn’t scream ‘I’m against economic inequality’. Just makes her look juvenile.

The simple fact is that the working class were outside the Met Gala protesting it. If AOC wanted to show working class solidarity, she would have been at the protest and not the gala.

AOC wore a “tax the rich” dress to the Met Gala, where a single ticket costs more than the median income in Trumbull County.

AOC, Nancy Pelosi, and their friends pretend to stand for the working class but they don’t represent everyday Americans.

AOC was not oblivious to the criticism she and her dress received. In a Q/A session on her Instagram stories, the politician and activist responded to a question about the same. 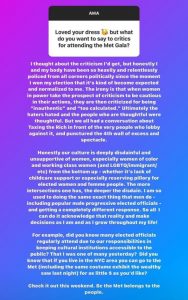 “I thought about the criticism I’d get, but honestly I and my body have been so heavily and relentlessly policed from all corners politically since the moment I won my election that it’s kind of become expected and normalized to me,” she began. “The irony is that when women in power take the prospect of criticism to be to be cautious in their actions, they are then criticized for being ‘inauthentic’ and ‘too calculated.’

“Honestly our culture is deeply disdainful and unsupportive of women, especially women of color, and working class women (and LGBTQ/ immigrant/ etc) from the bottom up — whether it’s lack of childcare support of especially reserving pillory for elected women and femme people,” she continued. “The more intersections one has, the deeper the disdain.”

“They want you to think that when we talk about rich, we’re talking about doctor or a lawyer instead of someone with hundreds of millions of dollars if not billions of dollars.” pic.twitter.com/QvQA7TtJ6f

AOC also reminded her followers once again that multiple elected officials are regularly invited to the Met Gala ‘due to our responsibilities in keeping cultural institutions accessible to the public’. She also revealed that individuals living in the NYC area can attend the Gala for as little money as they would like.

“Because the Met belongs to the people,” she concluded.

We stand for the basic human dignity of Kashmiris: Alexandria Ocasio-Cortez