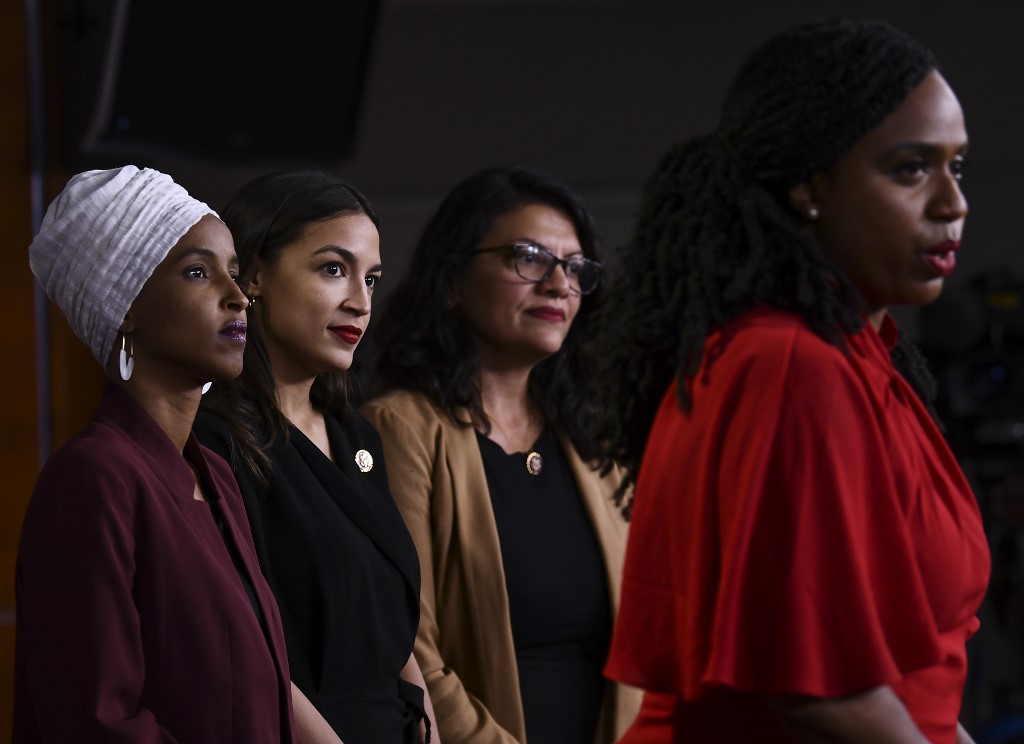 ‘The Squad’ hold a press conference, to address remarks made by US President Donald Trump earlier in the day, at the US Capitol in Washington, DC on July 15, 2019. – (PHOTO: AFP.)

KARACHI: This week launched four congresswomen in the United States in a media frenzy with US President Donald Trump and the Republicans as he once again made a racist jab at the women by tweeting his discontentment of them on Sunday.

So interesting to see “Progressive” Democrat Congresswomen, who originally came from countries whose governments are a complete and total catastrophe, the worst, most corrupt and inept anywhere in the world (if they even have a functioning government at all), now loudly……

….it is done. These places need your help badly, you can’t leave fast enough. I’m sure that Nancy Pelosi would be very happy to quickly work out free travel arrangements!

US representatives who make up ‘The Squad’ are Rashida Tlaib, a Palestinian-American, Ilhan Omar, a Somalian-American, Alexandria Ocasio-Cortez, a Puerto-Rican- American and Ayanna Pressley, an African-American. These women have often spoken out against the current policies in the US government that do not benefit not only people of color but the standard US citizen. In a recent interview with Gayle King, they clarified their stance on different issues they hope to tackle as part of Congress.

The “hateful and racist policies” of the United States of America, according to the four congresswomen who make up ‘The Squad’, are in desperate need of change. Trump went on the twitter rant mentioned above after the interview.

The Squad, along with several others were quick to oppose Trump’s tweets suggesting that it is completely wrong and entirely racist to tell them to go back from where they came. The four women have also commented that they have dealt with bullies all of their lives growing up but Trump has so far proven to be the ‘biggest bully’ they have come across. The media outreach that they have had being held as a trigger for Trump’s innate racism has been almost laughable by most who are still revving in the shocks of these comments coming from the country’s president.

We have a president today who is a racist. That needs to be said. pic.twitter.com/ZDnzmP1pTa

#IStandWithIlhan and am proud to work with her in Congress.

Trump is stoking the most despicable and disturbing currents in our society. And that very hatred and racism fuels him. We must fight together to defeat the most dangerous president in the history of our country.

Given that the news this week is all about the fight that Trump is picking with #TheSquad, I thought this editorial from January 2018 was apropos for another viewing. pic.twitter.com/nOAqeg6nsX

However, the situation surprisingly went from bad to worse as Trump’s defensive instincts landed him in another Twitter rampage on Wednesday detailing everything he thinks is wrong with the members of The Squad and generating a hate-filled shouting of his supporters at his rally telling the four members to go home.

…..Congresswomen, who I truly believe, based on their actions, hate our Country. Get a list of the HORRIBLE things they have said. Omar is polling at 8%, Cortez at 21%. Nancy Pelosi tried to push them away, but now they are forever wedded to the Democrat Party. See you in 2020!

The evidently problematic approach of the president in dealing with the women represent the previous tactics that he has seen employing whenever his policies have not been appreciated by others. This time it was seemingly more enraging as twitter users suggest that the distinctive features of the group (1.The fact that they’re women 2. The fact that they’re women of colour) could be the culprit. In addition to this, his supporters have escalated ethical boundaries through their backward and misogynistic comments labeling these women as ‘whacks’, mimicking the age-old perception of women being inhabitants of ‘hysteria’ every time they make a valid argument when they are unwilling to take a back seat to something that is not empathetic of others. The response of the members of the group is what has gone against their misogynistic opinions as the women handled the situation with utmost patience and intelligence. They also received a lot of support on Twitter where people made it clear that The Squad is staying right where they are.

Congresswoman Omar is staying here. I welcome your opinions on her policies. But if you think you are more American than her, you don’t know what America is, and it is you that should leave. https://t.co/DR7BWy7Soc

I stand in very deep moral and political solidarity with these four sisters — not because I agree with every word — but because they're looking at the world through the lens of the poor. https://t.co/VPvfzxToxF#FoxNews #TheSquad

And so it is so, so powerful to see the women of #TheSquad refuse to cower. Instead they insist "WE BELONG HERE" — that the people's house represents the people, all of us. That is so big. It is the best of America. It is an act of loving this country.

The members of the Squad have aided in the expansion of political possibilities in their country after less than a year later of being in office. They promote ideals of progressiveness and have often been quoted to bring passion and empathy to the Congress when dealing with issues related to ordinary people. Due to this, they have easily formed a connection with the wider public and seem to be popular in the news one day after the other. The Squad not only represents the diversity that the US has but they represent the young, the energetic and all those who choose solidarity as a form of mutual benefit rather than personal benefit. We are excited to view the journey of these bright and capable women in office and anticipate the positive changes that they will bring.