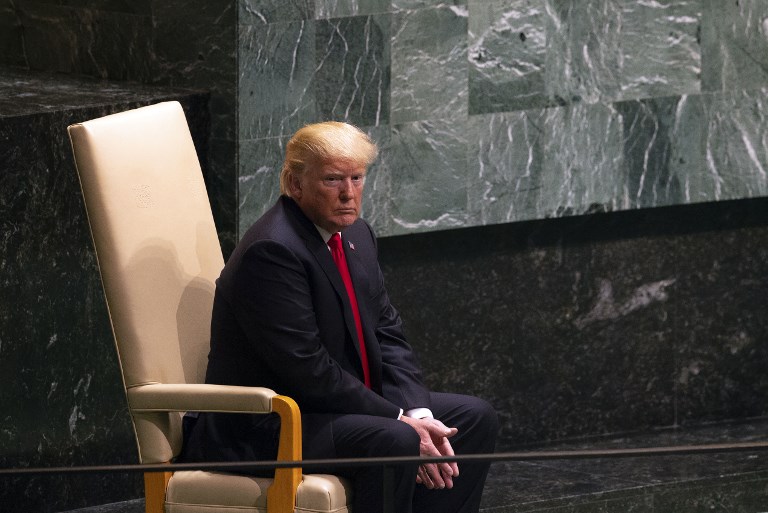 KARACHI: Never thought we’d live to see the day when a United States president would be laughed at … to his face.

President Donald Trump was addressing the United Nations General Assembly on Tuesday when he began to talk (read: boast) about the work his administration has done thus far.

“My administration has accomplished more than almost any administration in the history of our country,” said President Trump. This was a statement that invoked – wait for it – an unexpected roar of laughter from the audience which comprised of global leaders.

His response, on the other hand, was funnier.

"I didn't expect that reaction but that's OK."

Obviously Twitter is having a field day. They’re digging up Trump’s old tweets where he criticised policies of the Obama Administration by saying things like “the world is laughing at us”.

Lets fight like hell and stop this great and disgusting injustice! The world is laughing at us.

This is how people are reacting:

2. Some are celebrating the day for all the “good” things that have happened

3. Others are claiming they’ve been in the business of laughing at Trump long before the UN

not to brag or anything, but I was laughing at Donald Trump long before the UN was doing it

4. Some were more serious in their criticism over his conduct

Why isn't anyone talking about how Trump sounded so pathetically scattered and exhausted in his speech to the UN? Even apart from his ugly nationalistic speech, his demeanor was disturbing.

5. And then there’s this tweet that we don’t quite know how to feel about

TRUMP’S UN SPEECH WAS NOTHING SHORT OF SPECTACULAR‼️

What did you guy’s think of Trump’s speech?