How Netflix original, ‘The Kissing Booth 3’, overdoes its story

The film, for the first time, allows Elle to make a decision for herself, however, the essence gets lost in the oversimplification. 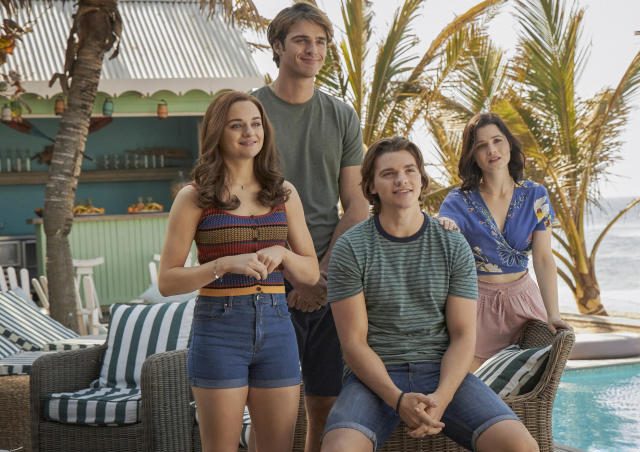 KARACHI: A film with a narration running throughout, can be a good feat. It helps explain just how the character feels deeply about it. It distinct certain events from the others and helps the audience understand just how two seemingly similar events have a distinctive effect on the character. However, when all that narration does is oversimplify something that can already be seen onscreen, with or without the narration, things can come a little overdone. Such has been the case with the recently released The Kissing Booth 3, on Netflix.

What it does get right

A Netflix original, The Kissing Booth 3 is the story of Elle juggling between her job, her friendship with Lee, and her relationship with Noah. A mess is bound to happen. In the midst of all this, Marco comes back to complicate things even further. Elle has decided to go to Harvard so she can finally be reunited with Noah, something she had longed for in the first sequel of the trilogy.

To make it up to a distraught Lee for getting into Harvard, Elle decides to do an elaborate bucket list they made as kids. (by the way, Lee does not yet know that she got into UC Berkeley as well, and is choosing Noah over him. To him it appears as though she was waitlisted at UC Berkeley) I mean… what’s with the entitlement, Lee? It is pretty wholesome at first, watching them embark on several quests together.

….until the bucket list becomes Lee’s life’s purpose and that is all he ever expects of Elle. Both the brothers are just two entitled spoiled boys who cannot give her a moment to pause and breathe. They want to be appreciated for what they do for her, such as the dinner Noah makes for Elle. Pretty relatable for women if you ask me.

Ultimately the couples break up. While Lee and Rachel’s breakup seems unnecessary, it was kinda important for Elle to part ways with Noah and be her own person for once. Noah had become her compass and all her life’s decisions were navigations to his direction. Although predictable, the film did a good job at explaining why their paths must diverge and perhaps reunite later, when they are two mature people, who know what they want in life as individuals.

The ending is open-ended. A character shift in both characters has been achieved, but no one knows if Elle and Noah get back together. While signs point towards the idea that they did, the film concludes before it is revealed whether they are. This makes the story about Elle and her character development as a woman seem more important than her love affair with Noah. The story prioritized her personal growth over her relationships with other people.

What it gets wrong

The story was going well up until the point, that somehow Marco had to swoop in and do exactly the same things (and perhaps less) he did in the second film. Try to slither in. However, that not only goes to show zero character development since his last film but also highlights that he could have been used for something else. All he does is give her pep talks when the character could have been used wisely or eliminated altogether. The entire story could have primarily focused on Elle’s independence, her choices, her career path, but it soon turns into the hopeless love triangle that had already been explored in the second film.

Other than that, there are scenes with a narration explaining what should be felt. Not told. The motherly feeling Elle gets from Mrs. Flynn, how bad Elle felt for lying to Lee, and how bad she felt after Lee lashed out at her over not showing up for the nth activity on their bucket list, how sad she felt leaving Flynn’s beach house behind. All of that could have been explained with real-time dialogues and expressions. The unnecessary narration (in a few places, not all) just overdid it when avoidance could have made things more subtle and better expressed.

The pep talk Mrs. Flynn gives Elle. Let’s be honest. It’s not the first time we saw such a conversation in a film. The dialogues could have been briefer, with a lot left for Elle to figure out instead of simply being told what she should do.

That brings me to my last point. Elle seems a more passive character in the film. A lot is just ‘happening’ to her. Marco just appeared out of nowhere, Chloe happened to see her parents divorce at the very same time, and even her character was all about pep talks and no substance. The problem with Elle and even Marco and Chloe is that they are not exactly taking the narrative forward. Elle happens to be the protagonist, and her active decisions must be a generator, not what is done to her by other characters.

What should be kept in mind is that the Netflix original, The Kissing Booth 3 is perhaps catering to a much younger audience and breaking it down for them to understand who they should be, before becoming someone to somebody else.