Blake Lively wants her kids to be left alone

"My children were being stalked by men all day...Please stop paying grown ass men to hide and hunt children," the mother of three told Daily Mail Australia 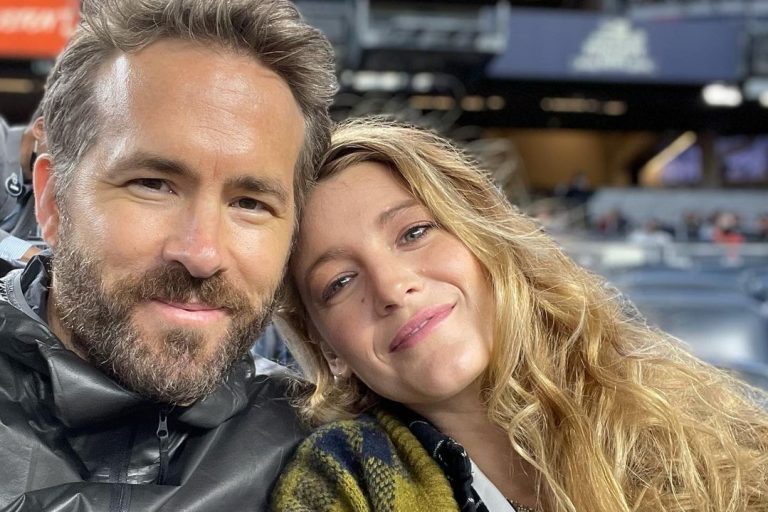 KARACHI: Famous Hollywood couple Blake Lively and Ryan Reynolds are quite open about their relationship and often share pictures with each other on their social media. One thing that they almost never share publicly are pictures of their children. The couple would have liked to keep it that way until Blake Lively found herself in a ‘frightening’ situation where male reporters of Daily Mail Australia were stalking her kids, trying to photograph them.

Being public figures, Lively and her husband are, of course, used to being followed around by paparazzi and perhaps that is a downside of being a celebrity. Lively, however, wants publications to leave her daughters out of the equation. “You edit together these images together to look like I’m happily waving. But that is deceitful,” Lively commented under Daily Mail AU’s post which shows a collage of her pushing her daughters’ stroller and another of her waving at the camera. “The real story is: My children were being stalked by a men all day. Jumping out. And then hiding.”

“A stranger on the street got into words with them (the paparazzi) because it was so upsetting for her to see. When I tried to calmly approach the photographer you hired to take these pictures in order to speak to him, he would run away. And jump out again at the next block.,” continued Lively. “Do you do background checks on the photographs you pay to stalk children? Where is your morality here? I would like to know. Or do you simply not care about the safety of children? The photographers who would speak to me, I was able to agree to smile and wave and let them take my picture away from my children if they would leave my kids alone. Because it was frightening. Tell the whole story.” 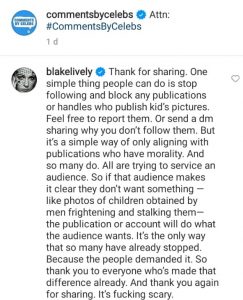 Lively’s comment was reposted by an Instagram account titled ‘Comments by Celebs’. Commenting under their post, Lively urged her readers to contribute towards the cause and push publications into reporting more responsibly. “Thank for sharing. One simple thing people can do is stop following and block any publications or handles who publish kid’s pictures. Feel free to report them. Or send a dm sharing why you don’t follow them. But it’s a simple way of only aligning with publications who have morality. And so many do,” wrote Lively. “All are trying to service an audience. So if that audience makes it clear they don’t want something —like photos of children obtained by men frightening and stalking them— the publication or account will do what the audience wants. It’s the only way that so many have already stopped. Because the people demanded it. So thank you to everyone who’s made that difference already. And thank you again for sharing. It’s fucking scary.”