Invited alongside all-rounder cricketer Nida Dar to Noman Ejaz's show 'G Sarkar', Abdul Razzaq was found making comments that did not sit well with many 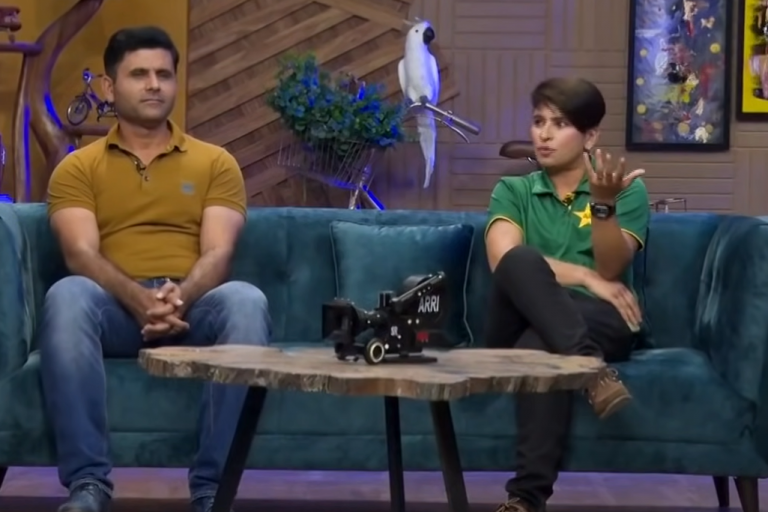 KARACHI: Last month, cricketer Abdul Razzaq and Nida Dar made an appearance on G Sarkar, a show hosted by Noman Ejaz. The two cricketers discussed their respective careers, with Dar emphasizing how encouragement for women who wish to enter sports must begin at home. The episode aired on June 5th but when the video resurfaced a month later, the conversation is largely being discussed in the context of the sexist remarks made by Abdul Razzaq.

Speaking with Noman Ejaz, Nida Dar stated that her own father was a first-class cricketer, but she was still discouraged by her brother to pursue the field as a woman. “There is no future in cricket of girls,” she said, quoting her brother. However, she urged that women must be pushed forward because many of Pakistan’s current female cricketers are high-ranking ones, including Nida Dar who has qualified for the 8th position in the top twenty all-rounders across the world.

The conversation later progressed into Dar explaining, “We now have grounds available. PCB tries its best that women participate in cricket. Women come from different areas of Pakistan, such as rural areas to specifically play cricket. They wish to pursue cricket as a profession.” Cutting the conversation was one of the panelists, Ayesha, who said, “and then stop playing when they get married.”

Nida Dar pressed on that women try their best to play for as long as they can. To this, cricketer Abdul Razzaq stated, “Marriage does not happen.” With everyone in the room confused, the fast-medium bowler went on to add, “It is because of the kind of field they are in. As a cricketer, she wants to reach the level of male cricketers and wants to be able to do what we can do. She believes men are not the only ones who can do it, but she can too and has lost the ‘feel’. If you shake hands with her she does not feel like a girl.”

Nida Dar explained that her profession requires her to stay fit and attend the gym as well.  Interrupting her, Abdul Razzaq said, “You can look at her haircut,” as the panelists, as well as Ejaz, erupt in a burst of laughter.

Twitter has been calling out the sexist remarks made by Abdul Razzaq and shed light on the fact that not even someone as talented as Nida Dar is spared from casual sexism.

Nida Dar is the first Pakistani female cricketer to take 100 wickets in T20Is. The way all people here attacking her is so disturbing. More power to Nida Dar! She managed to remain calm and composed. pic.twitter.com/UrVp0FAuBy

Abdul Razzaq telling Nida Dar she looks manly is exactly the reason why I have grown up with body image issues. I have severe trauma from body shaming and these cheap people are the reason why we are still in that frame of mind and get conscious. Atleast I do. He should apologis

People have also pointed out that Abdul Razzaq as well as the panelists (one of which was a woman herself) made sexist remarks that reduced her to her looks and marital status.

Nida Dar is one of Pakistan's finest cricketers. Abdul Razzaq and these others gang up to try to reduce her to marriage, hairstyles and femininity. Shows that women can be national heroes but will still be measured up against traditional societal expectations and gender roles. https://t.co/iX9eKiNQdI

Disgusting. How can the hosts condone such behavior let alone encourage it with their stupid giggles. I think Nida Dar really took it in stride. The commentary was unacceptable

Disgusting. Part of the reason why people do not watch these ill concepted shows. A big dislike and thumbs down to anyone who look down upon women athletes, be they belong to any sports. Nida Dar you are our star. Keep shining. 🌟