I watched Midsummer Chaos so you don’t have to

Boy was it chaotic. 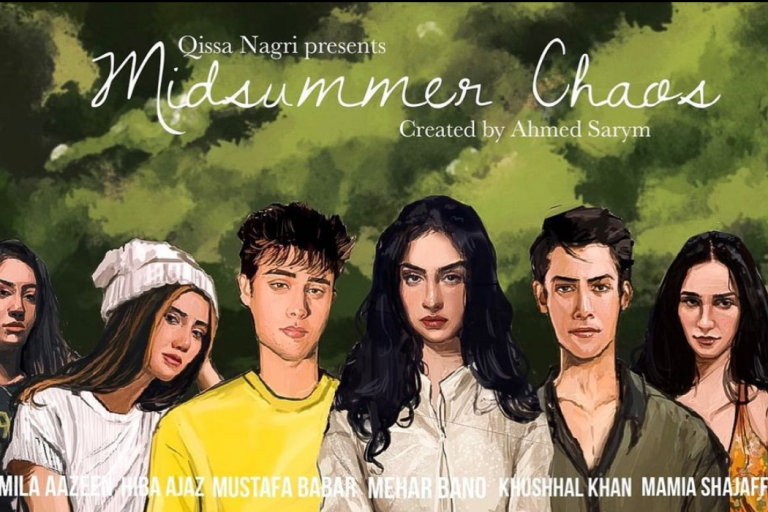 KARACHI: If there’s one thing I enjoy doing it’s watching trash TV. So much goes on in these shows and it’s nothing short of a wild ride. And so I decided to watch the new Pakistani web series Midsummer Chaos and it definitely didn’t disappoint. However, two episodes in, all I can say is : I have SO many questions. But nevertheless, I’m going to try to make sense of the two episodes.

me tryna figure out what actually happened in Midsummer Chaos pic.twitter.com/5T9vZiyh8K

To begin with, we have four characters in the show. Sameer; the influencer/model, Haris; his best friend/an incredibly whiny kid, Alaina; Haris’s girlfriend and, Kyra; Alaina’s best friend.

The first episode starts with a very sad cake-cutting ceremony for Haris. It’s just Haris and his dad and an already cut-up cake. No jokes.

The scene then cuts to our first look at Sameer, who is playing an Uber driver for his friends. Kyra and Alaina are too busy getting dressed and decide they’ll come by themselves which doesn’t anger Sameer as much as Haris wondering where his girlfriend is and why she isn’t answering his calls. Sameer gives Haris an earful about whining about his girlfriend drama so Haris decides the next best thing to do is to whine about the party they’re going to and then proceeds to get another earful. Fun fun fun.

Cut to the party with 18-year-olds day drinking and the existential question of whether Sameer is hot or cool.

Sameer becomes reacquainted with an ex-girlfriend who he claims he goes way back with and when times were much simpler. But I’m not buying it. You’re 18, how far back can you go and how complicated can your life be? Soon enough Kyra and Alaina walk in with interlocked fingers which is a bit strange but we don’t have much time to dwell on that since Alaina separates herself to take a call. Haris creeps up on his girlfriend asking her why she’s alone while “like hum sab udhar hain” (we all are there). Alaina tells her boyfriend that she needs space and he agrees to give it to her and in the very next second asks her if she’s okay. Pretty sure that’s the opposite of giving someone space. Alaina walks away and Haris kicks a chair in frustration. Such teenage angst.

Krya and Alaina end up fighting the shortest fight in the history of fights over the fact she hasn’t broken up with Haris. It lasts a total of five seconds which is ironically the amount of time they spent at the party. This is ironic since they spent more time getting ready for the said party.

What’s a party without some drama? Sameer and Salaar, the host and “ameer baap ki bigri hui aulad” (spoilt kid of a rich father) get into a tousle. Apparently, Salaar thinks the ultimate diss is to mock someone for having an absentee father, and for Sameer it’s to tell Haris that the reason Haris exists is because of him. I don’t think this dialogue was well thought through.

However, what really doesn’t sit well for me is the mother-son moment Sameer has at home. Between the pained looks and the whisper, it seemed oddly seductive and I’m pretty sure that’s not what they were aiming for.

I’m a stickler for punishment which is why I decided to brave through the second episode of Midsummer Chaos. Oddly enough, not a lot happened in the second episode but unsurprisingly enough what did happen made for some very good bad TV. So here’s a recap.

The episode is basically a terrible timeline of flashbacks from before the party and some post-party bits too. To start off with it seems as though a recurring theme in the show is absentee fathers. We learn a bit about Kyra who is back in Pakistan from Canada because her parent split and she’s moving back with her mother. We also learn that Alaina keeps ghosting Haris to hang out with Kyra but Haris can’t take a hint. Haris thinks that everything is going good between the two and nothing can possibly go wrong since both families are friends. Not sure that’s how relationships work. In the meantime, Alaina and Kyra are growing close. Between the hand holding and the strange hair playing sequence, maybe there’s more to their relationship than being just friends.

I also learned a new drinking game from this episode. Take a shot every time Haris says yaar. Disclaimer: he says it every two seconds. Our characters also like to make awkward pauses in the middle of their sentences and they stretch the last word of every sentence they speak.

Anyways, Sameer is invited for an interview where the interviewer sounds like those robotic voiceovers. She pushes Sameer to have a breakdown when she keeps pushing him for answers about the drama at Salaar’s party and he storms off. But before that he has a moment where he laments about his broken friendships and how something always goes wrong in his relationships.

Sameer isn’t the only one who has a breakdown. Alaina decides to chop off all her hair and ends up with a choppy-looking pixie cut. But that’s probably the most relatable thing to happen in the past two episodes. She then goes on to break up with Haris telling him that they were kids when they fell in love (you’re still just kids!!) and that the only reason they were together is because of society’s expectations.  I’m so confused about which society she lives in? Haris also goes on a tangent talking about being in a relationship because of lack of self-worth. Not sure what they were trying to establish, to be honest.

Another drinking game: take a shot every time Haris says Alaina in this scene. Disclaimer: it’s a lot of times.

But the strangest thing to happen in Midsummer Chaos episode 2 is the dance sequence in the end. At the end of episode 1, we’re introduced to who I had assumed to be Haris’s sister. Point to be noted:she’s the only one in the show who can speak proper Urdu. But from the dance sequence, I assume she might not be his sister. Is she his alter ego? His subconscious? Who knows?

The one thing I do know is this:

this part where midsummer chaos broke the fourth wall was genius, mustafa just couldn’t keep it in anymore pic.twitter.com/VW9wM7k4yy