In a detailed post, the ace writer addressed criticism the trailer of the upcoming web series has been receiving 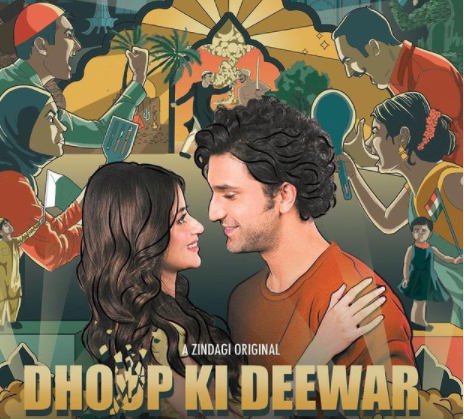 KARACHI: The trailer for the much-awaited Zee5 series Dhoop Ki Deewar was finally released and while there was a flurry of excitement from fans, others were not happy. Writer Umera Ahmed had to face severe backlash for her role in the Dhoop Ki Deewar production with criticism ranging from the show being written for an Indian channel to promoting a Pakistan-India/Muslim-Hindu love story to Ahmed being called anti-Pakistani. However, it seems as though Ahmed was prepared for the anger and soon released a detailed statement in response to all that was being said.

To start off, Ahmed made it clear that she had not written Dhoop Ki Deewar specifically for Zee5. She clarified that the series was written back in 2018, much before tensions between the countries had escalated, along with three other stories namely Alif, Laal, and Eik Jhooti Love Story and had been signed on with the Pakistani content company Group M. It was then Group M’s decision to sell Dhoop Ki Deewar to an international platform.

Ahmed revealed that Netflix had also been approached to buy the rights to the story but eventually the project landed with Zee5. Umera Ahmed rightly pointed out that Dhoop Ki Deewar isn’t the only Pakistani series streaming on the Zee5 app. Series such as Zindagi Gulzar Hai can also be found on the streaming service. She also clarified that, as a writer, she has no say in where her project lands once it’s been signed off with a company and that whatever proceeds from the sale were received, they went to Group M and not her.

Umera Ahmed also clarified that Dhoop Ki Deewar isn’t a love story. Instead, she called it a “social tragedy” and the real focus of the series is what the families of martyred soldiers have to face when they lose their loved ones. The writer also called out people whose religious sentiments were hurt and believes that a love story would have been acceptable had the male lead been a Muslim. Ahmed explained that there is a reason behind the female lead being a Pakistani Muslim. Moreover, even if the religious identities were reversed, it still wouldn’t be acceptable for a Hindu and a Muslim to be together.

As far as the accusation about being a traitor is concerned, Umera Ahmed stated that she had done her due diligence and had sent the story to ISPR for approval. In fact, it was ISPR who acknowledged that they wanted nothing more than peace talks to be conducted between the two countries because the continuous tensions never amounted to more than innocent lives being lost. Ahmed wrote that she personally lives near the Line of Control and so has first-hand experience with the situation.

It is fair to say that it is too soon to pass judgment on a show that hasn’t been released yet. With June 25 just a few days away, we can only wait to see what the show has to offer.