How Palestinian keffiyeh is being exploited

Brands such as Louis Vuitton have taken the Palestinian keffiyeh and sold it for high profits without any reference to what and who it stands for. 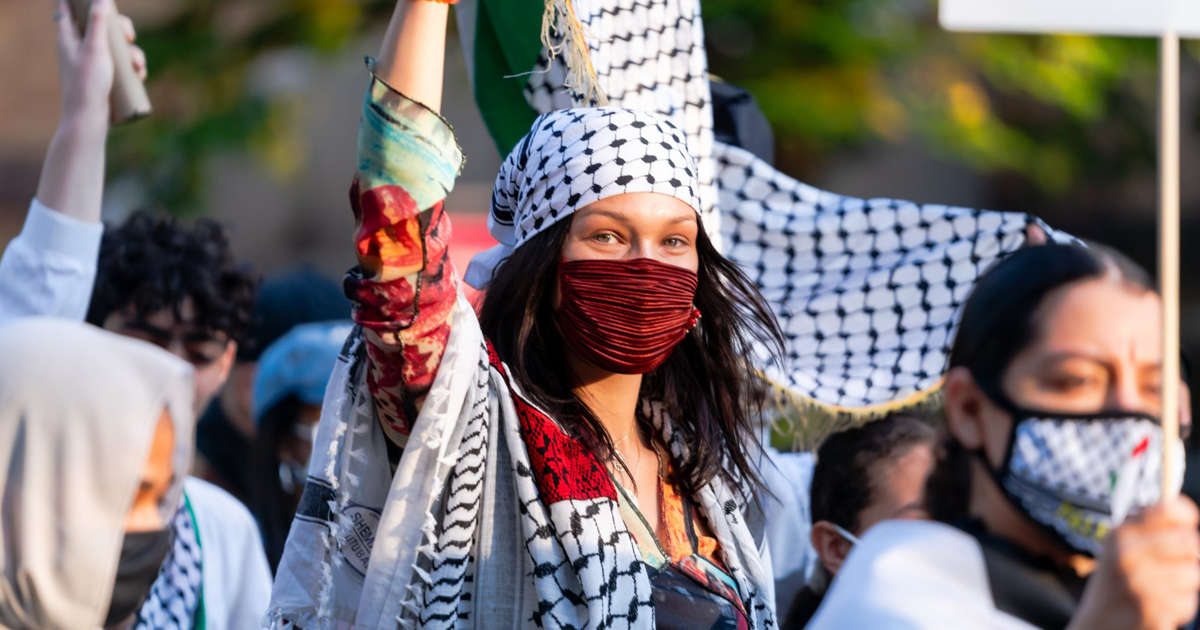 KARACHI: The keffiyeh is a chequered designed cloth that is predominantly associated with Palestinian people. The keffiyeh and how it’s worn tells different stories about the person wearing it. The color or the pattern describes a region or a tribe. The way it’s worn, either loosely draped over the shoulder, folded up on the sides of the head, or as a turban also tells a story. But the loudest story that the keffiyeh tells us is about the Palestinian struggle. It is symbolic of the Palestinians resilience against the apartheid state they are fighting against. Unfortunately, the Palestinian keffiyeh has now become a symbol that has highlighted the hypocrisy especially that of the fashion industry. Brands that have chosen to remain mum or neutral in regards to the Palestinian crisis have exploited the keffiyeh for monetary gains.

Palestinian fashion designer, Omar Joseph Nasser-Khoury, told The Guardian, the keffiyeh is symbolic of  “dispossession, systematic displacement, extrajudicial killings, and oppression”. And so when a brand such as Louis Vuitton, which has clearly stated that they have a “neutral stance” in the ongoing crisis, sell the Palestinian keffiyeh for a staggering $700, it is what Nasser-Khoury rightly calls “disrespectful and exploitative.”

To add insult to injury is the fact that Louis Vuitton is selling the scarf, which is worn either in white or red, in blue. Blue, a color that is predominant in the Israel flag.

Louis Vuitton says they are politically neutral yet they are getting profits from the sale of this $705 keffiyeh inspired scarf usually worn by the Arabs and a symbol of Palestinian nationalism. And the color, is that some form of passive political commentary? pic.twitter.com/t3EALTVV56

Louis Vuitton isn’t the only high-end brand to exploit the Palestinian keffiyeh in the name of fashion. Italian brand Fendi also has gone down the same route with their take on the design and was selling it for $835.

@LouisVuitton @Fendi
A lot of heat coming in for you guys, people for this. Your silence makes it sound all true, why don’t you break this silence and clear it all. Is it in support of #Palestine or not? Comment before you loose more customers.#FreePalestine #Forever🇵🇸 pic.twitter.com/xqf7qSYNxD

The cost at which the scarves are being sold, even a small donation to the country and to the people they have taken the design from would be a big deal in the re-building of Gaza and other war-stricken Palestinian areas as well as raising awareness about their plight. But the brands won’t do that. In fact, the Western world has chosen to associate the keffiyeh with terrorism. A quick Google search of “what types of headgear or scarves do terrorists wear?” will show the keffiyeh. So, they’re willing to belittle the Palestinian identity while also minting it of its worth without any reference to the people.

But what does the Palestinian keffiyeh really stand for? Different people have different interpretations. For many, the keffiyeh is a fishing net, a honeycomb, and the marks of dirt and sweat off a worker’s brow. Others associate wheat with the keffiyeh in reference to Jericho which is said to be one of the first cities to grow the grain. Another interesting take is to see barbed wire in the keffiyeh representing the illegal occupation and prison that the Palestinians are enduring.

For most, it represents the armor that the Palestinians wear.