No, Dior has not suspended Bella Hadid’s contract

The fashion giant is still working with the supermodel and maintains a neutral position on the ongoing issue pertaining to Palestine and Israel. 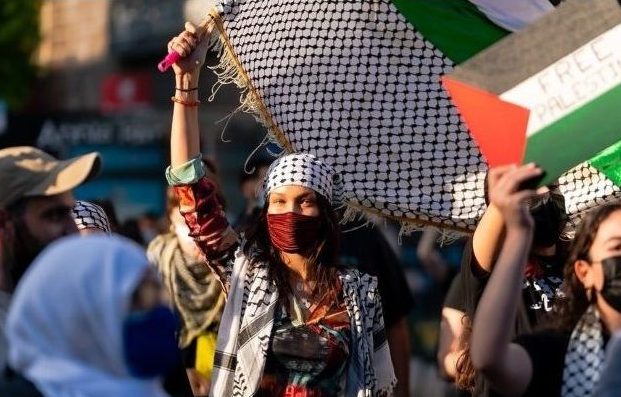 KARACHI: Palestine has been under the Israeli Apartheid regime for more than seventy years now. Global attention to the issue has shifted in favor of Palestinians for the first time, due to the on-ground reportage and documentation via citizen journalism with the help of social media and influential people like Bella Hadid speaking up for Palestine. People all over the world have used this time to amplify their voices by staging protests and calling out the oppressor through social media by sharing photos and videos posted by Palestinian victims.

Earlier, rumors were circulating that Bella Hadid, who had been extremely vocal about Palestine by attending protests and standing up for the cause on her social media, has had her Dior contract suspended. However, it was all just that – a rumor. Diet Prada a watchdog in the fashion industry broke the news that Bella Hadid’s contract with Dior is still secure.

⠀⠀⠀⠀⠀⠀⠀⠀⠀
“Rumors that both Dior and Michael Kors terminated their contracts with the half Dutch and half Palestinian model surfaced some time around Wednesday evening, coming to a head-on Thursday morning as Twitter was flooded with tweets from netizens who were dismayed and upset at Dior’s apparent decision. It was later revealed that a viral TikTok, which misspelled Palestine as “Palistine,” may have been responsible for spreading the misinformation.”

The outlet also revealed how Black Lives Matter has served in furthering the Palestinian cause as well and is perhaps the reason why people within the company would stand against their employers should Bella Hadid be removed.

“Now, multiple sources within LVMH who requested anonymity have confirmed that Dior is standing by Hadid, who has been the face of Dior Beauty since 2016. LVMH’s stance on politics is neutral, but they are not canceling Bella’s contract,” one source said. “A lot of people inside the company are supportive of what’s going on because of BLM,” another source said. “The death of George Floyd has contributed directly to people speaking up for injustices around the world… people have had enough.”

Diet Prada also shared that while Dior has not given any official statement as yet, the security on Hadid’s contract suggests that a tide may well be turning within the fashion industry as people become more informed on current affairs. “More ‘taboo’ conversations are being normalized without the fear of retribution.”

“It shows that they can continue speaking out,” a source told the outlet while talking about the supermodel’s contract remaining in place. “Silence is complicity.”

The supermodel and her sister Gigi are half dutch and half-Palestinian. Bella Hadid’s paternal grandfather, Anwar Hadid was a Palestinian professor, from the Hadid Quarters of Safad, Palestine. The family, including her father – Mohamed Hadid, who was very young at the time, was expelled from their homeland during the 1948 Nakba and made refugees.“…taken out of their homes in Palestine in 1948, becoming refugees in Syria, then Lebanon, then Tunisia,” as she shared in one of her posts on Instagram.

What Hadid has actually become a victim of for taking her stand for Palestine, is a paid article in The New York Times, alongside Dua Lipa and Gigi Hadid. The full-page ad, also comprising a small article, accuses the three singers of anti-semitism and paving the way towards a second holocaust. Twitter has been calling out the act under the hashtag #NYTPropaganda.