Meesha Shafi has not only fought for her case in court but also against fake news about her and the outlets that encourage it. 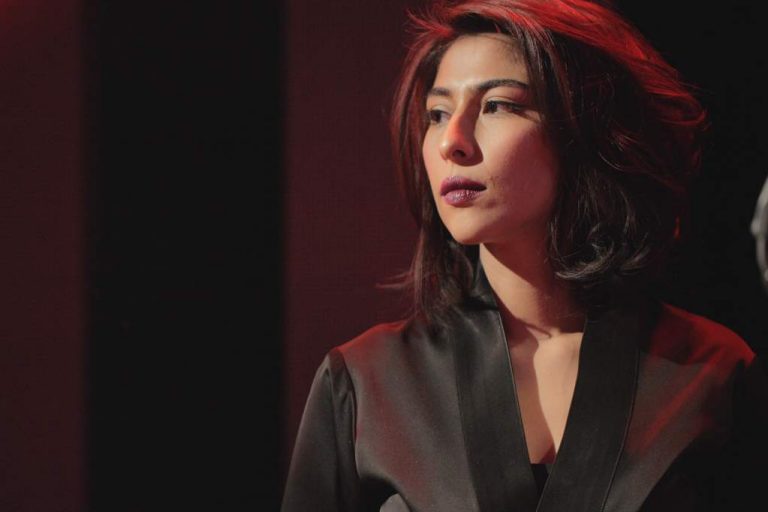 KARACHI: Earlier, in January 2021, Meesha Shafi had her plea finally registered at the supreme court after an amendment made to the interpretation of the ‘workplace’ for harassment cases in workplaces. However, her battle has been beyond that of the courtroom. Circulation of fake news has been a major hurdle in her path, one prominent example being FIA finding Meesha Shafi guilty for running a smear campaign against her opponent. The misconception was debunked by Soch Fact Check. The case has been one of the most prominent cases and became the talk of the town ever since it started. The extensive involvement and polarised natures honed by the supporters of each side have resulted in rather drastic fake news circulating around.

Recently, Shafi and her team of lawyers won their case against ARY News. 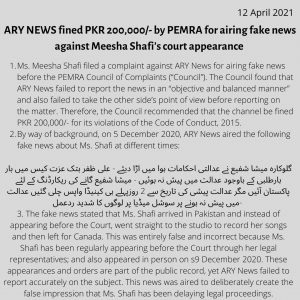 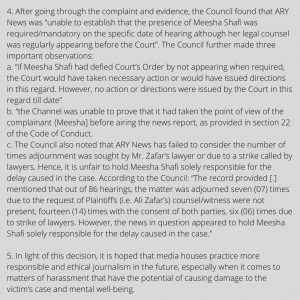 We got in touch with her lawyer Dania Mukhtar, who contested Shafi’s case against ARY News. “Meesha Shafi is a survivor of sexual harassment who has already been a target of a smear campaign aimed at silencing her. There has been a frenzy of misinformation regarding the Court’s proceedings to which ARY News has also contributed. Therefore, our primary aim was to disseminate the truth to the public and set the record straight.”

Meesha Shafi had presented her complaint against the news outlet before the PEMRA Council of Complaints. The Council found the outlet guilty of airing news that did not hold the truth and report in an “objective and balanced manner”. For this, the outlet has been fined PKR 200,000/- for its violations of the Code of Conduct.

Giving the background of the case, Mukhtar explained, “Briefly put, ARY News broadcasted fake news against Meesha Shafi that she arrived in Pakistan and instead of appearing before the Court, went straight to the studio to record her songs and then left for Canada. In addition to this, ARY News briefly displayed a random order of the Court (as a source) at the same time when the anchor-person was broadcasting fake news about Meesha – thereby manipulating the viewers into believing that the fake news was indeed correct. By doing so, ARY News violated several provisions of the Electronic Media (Programmes and Advertisements) Code of Conduct, 2015.”

First we talk…. then face the courts !

You haven’t been paying attention at all I see 🙄 https://t.co/w2VJgS0kUU

“We filed the complaint before the PEMRA Council of Complaints and submitted the evidence which included all court orders. Those orders reflected the truth i.e. Ms. Shafi has been regularly appearing before the Court through her legal representatives and also appeared in person on 9 December 2019. In fact, the Council also noted that if Meesha Shafi had been violating Court’s orders then the Court would have taken necessary action against her by now. Despite the fact that these orders were part of public records and accessible to ARY News, the channel unethically broadcasted fake news,” added Mukhtar.

She also pointed out that ARY does not take into account the number of times the delay in the court proceedings was caused by the other side. “The Council highlighted another important point that ARY News has failed to consider the number of times adjournment was sought by Mr. Zafar’s lawyer or due to a strike called by lawyers. Hence, it is unfair to insinuate that Meesha Shafi is solely responsible for the delay caused in the case.”

Moreover, the council found ARY News guilty of showing just one side of the matter and failed to obtain the other side’s point of view before reporting.

Fake reportage is a serious issue, and it is time that news outlets take responsibility for reporting ethically, accurately, and sincerely. In conclusion, Dania Mukhtar said, “We hope that this sets the record straight that Meesha Shafi has been diligently fighting the court battles. We also hope that all news channels will strive for fairness and accuracy while broadcasting news in the future.”

For whatever it’s worth.. I just want to tell all the victims of sexual violation/violence, it wasn’t your fault ♥️

Don’t ever let anyone get it twisted.