We are standing in 2021 and one would like to move beyond the so-called beauty standards women are expected to fit into. But ongoing Pakistani drama 'Oye Motti' depicts how body shaming is still rampant and how damaging it is to an individual. 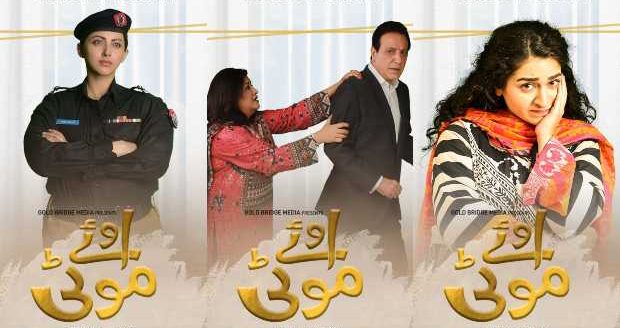 KARACHI: Too tall, too short. Too dark, too fair. Too thin, too fat. For years, women have been tasked with fitting their bodies and themselves into this preconceived standard of beauty which in reality isn’t achievable. You would think that now in 2021 this expectation would have eased up, but it hasn’t. Recently a teaser of a Pakistani drama called Oye Moti which is on air on Express TV channel has opened up the conversation about how body shaming is still rampant and how damaging it is to an individual. The drama boasts a spectacular cast with appearances from Hina Dilpazeer, Maria Wasti and Javed Sheikh, yet everything else about the series is all wrong. The premise of the show is to stop body shaming people who are on the plus side, yet in between the inappropriate casting of key characters, the fat jokes and the stereotypes, the series does everything else other than what it set out to do.

The very first thing that the series got wrong is their casting. Rather than being more body inclusive and featuring actors who are actually plus sized, they chose to cast Hajra Yamin and Moomal Khalid, who are naturally thin and have them don on fat suits. The series gets worse from there on out.

Every episode of the series has a different cast and story but the recurring theme, or rather what was meant to be the recurring theme, is that a woman’s potential should not be masked by her weight. Yet, with each episode, that theme doesn’t even come into play until the last ten minutes of the drama. In the first episode, Hajra Yamin manages to save the company she works for from a major disaster, but throughout the episode there is no mention of how hardworking or smart she is. Instead, the entire focus is on her boss constantly fat-shaming her.

Aaminah Haq responds to being body shamed by Amna Ilyas

Moving on, the ninth episode featuring TikTok sensation Kanwal Aftab is even worse. Aftab’s character is shown to be 160kg, which in itself is ridiculous because Aftab is far from that weight. Now when she is told that her weight is literally going to kill her, her response is that not even death will stop her from eating and she’d rather die than torture herself with a healthy diet and exercise. So, all in all, the drama shows plus sized people to be gluttonous and whose sole purpose in life is to eat. In the midst of all the triggering fat jokes and bullying, Aftab’s character falls in love with a man who agrees to marry her on the condition that she loses weight. He chooses the day of their engagement to fat-shame her and embarrass her in front of the same colleagues who bully her everyday. And somehow that is what prompts her to lose weight, perpetuating the same stereotype that a woman achieves a certain body size only to please a man.

While one can’t deny that women are often bullied and beauty does come before brains when it comes to women in our society, the way drama serial Oye Moti chose to tackle the issue just doesn’t stick. The message falls flat and what should be seen as verbal bullying is delivered as though it is harmless jokes with no effect on the person it is directed to.

In certain episodes, it’s almost as though the “fat” character is only included just for the sake of it. The fourth episode starring Moomal Khalid is about a woman who dreams of following her father’s footsteps and joining the police force but can’t because she’s overweight. Somehow, she manages to tackle armed robbers who break into her house and beats them up so bad that they’d rather be handed over to the police than deal with her. What her weight had anything to do with her saving the day made very little sense. Perhaps, the only redeeming quality about the show was Hina Dilapazeer’s episode about a wife’s insecurities that her husband is cheating on her with a younger, thinner girl.

Another recurring theme in the show is following the fat girl stereotype: the bubbly, ditzy fat girl who is incredibly naive and bears heartbreak because she isn’t good enough for the handsome hero. Surprisingly enough, this isn’t a just a desi stereotype and is prevalent in Hollywood, just as body shaming is too. When the popular Netflix series Bridgerton came out, a lot of people criticized the show for their portrayal of Penelope Featherington, for this very reason. The fat girl is always the sidekick, pining after the guy who only sees her as a friend since apparently fat girls are only good enough for the friend-zone.

The western media’s unrelenting body shaming was bought to light recently by reality TV star Khloe Kardashian. Kardashian defended herself for having an unfiltered image of her in a bikini removed from social media stating “the pressure, constant ridicule and judgment my entire life to be perfect and to meet other’s standards of how I should look has been too much to bear.”

Actress Jameela Jamil has also been very candid about how she suffered from body shaming and how it affected her mental health.. She talked about how her weight, which increased because of medication, was constantly up for discussion despite the fact she was a radio DJ and so it had no bearing on her work. She shocked everyone with the revelation that designers refused to work with her on award shows because she was a size 12.

It seems as though fellows across the border are in the same boat and body shaming is just as prevalent there. Rohan from Kabhi Khushi Kabhi Gham, for instance, is synonymous with fat shaming and ridicule in Bollywood.

Speaking of India, actor including Vidya Balan, Sonaskshi Sinha, Sonam Kapoor and Illeana D’Cruz all have spoken out about the impossible beauty standards that have been set for them and the lengths they have gone to achieve them. They haven’t shied away from talking about the effect body shaming has had on their mental health.

Coming back to the scenario in Pakistan, drama serial Oye Moti is a reminder how we need to change the standards of beauty that have been set for women. Here’s to hoping that change comes soon.