Celebrities who recently found their significant others 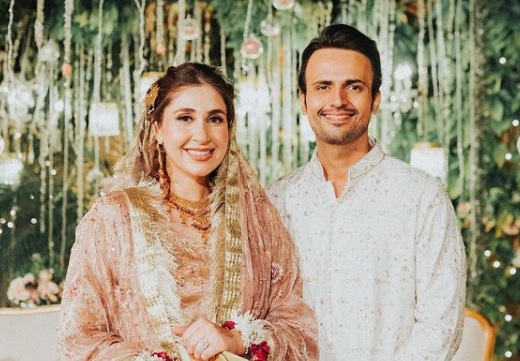 KARACHI: Coronavirus may have taken away some of our luxuries, but marriages can never be brought to a halt. Aligning ourselves to the new normal, weddings are now being held with strict orders regarding the observance of SOPs and timeliness. Although recently, all weddings (whether outdoor or indoor) have been banned for the month of Ramazan, there have still been some lovebirds in the industry who tied the knot or got engaged shortly before. Just like 2020, perhaps 2021 is yet another year for celebrity marriages and engagements.

The couple tied the knot very recently. Several lauded the intimacy of the event and the observance of SOPs. In a heartfelt message to his followers, the Sabaat actor wrote, “Zunaira Inam Khan. Thank you for making me the luckiest man on earth. I haven’t felt such happiness in a very long time. You’ve stood by me in the moments I was down and amplified the happy moments. Been my rock and my support. I am blessed.”

He also mentioned that the wedding was originally planned for later, however, due to restrictions, it was pulled back. “Dear World – I married this amazing woman today in a small socially distant gathering. Our big day was supposed to be on 2nd April but due to the lockdown restrictions from 1st April, we had to pull it back. We were tested and followed SOPs. We both need your duas and blessings.”

The Motorcycle Girl, Sohai Ali Abro got married to Shehzar Mohammad, an athlete, and cricketer, who also happens to be the son of former cricketer Shoaib Mohammad.

In a heartfelt post announcing his proposal to her, Zoya Nasir said, “He asked and I said yes. Thank you for being my light in the darkest hours and showing me the true meaning of happiness. Here’s to a forever with you, my soulmate.” Christian Betzman also announced accepting Islam before the proposal was made public.

The two got engaged early in February and have been inseparable since.

The two artists have recently been quite open about their relationship with both of them sharing heartfelt posts for their significant other on social media. However, Aima Baig officially announced their engagement on 20th March, 2021, and we cannot wait for the two to get married!