The series, at first glance, seems to tick all the boxes needed to make a hit show with strong female leads, scandals, family drama and intimacy but is that really the case? 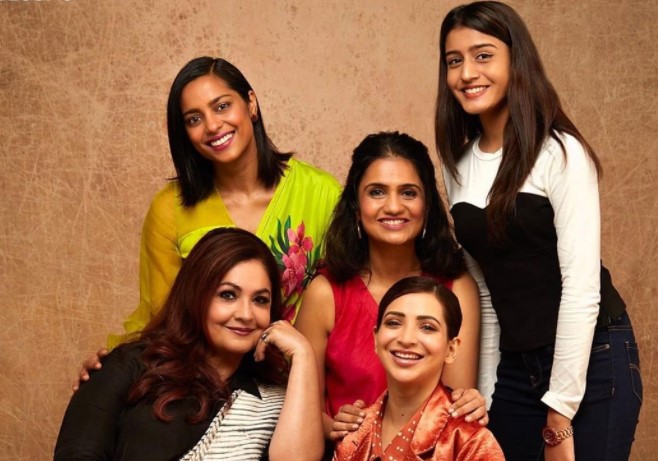 KARACHI: At first glance, Bombay Begums seems to tick all the boxes needed to make a hit show with strong female leads, scandals, family drama and intimacy. Yet, somehow the show seemed to have missed the mark especially with the problematic portrayal of the female characters and especially with the way they dealt with sexual harassment. It leaves you wondering if the show really is about female empowerment. Here is our review of Bombay Begums, a show that has been trending on Netflix in Pakistan ever since its launch.

At the heart of Bombay Begums is infidelity. Almost all of the female leads are unfaithful in their relationships and they are shown to have no remorse for their actions whereas their male counterparts are shown to exhibit more self-control and are much more understanding. Fatima’s (Shahana Goswami) marriage is going through a rough patch because of her infertility issues and promotion at her workplace. And so, that somehow justifies her need to cheat on her husband. When she confesses to him she brazenly goes onto to say “maybe I’m not sorry. I needed it.” The entire confrontation is made worse when she gets upset that her husband isn’t sympathetic to her reasons that made her feel the need to cheat.

Whereas, her husband, Arijay (Vivek Gomber), is nothing but supportive of Fatima. Fatima’s promotion means that he loses his own and still takes it in stride. As the show goes on, Fatima becomes increasingly selfish and hard to like and the more she turns into a bad guy, Arijay is increasingly likeable. Fatima doesn’t hesitate in being unfaithful whereas there is a brief scene where there is a lead up to Arijay and a friend being flirtatious but it never pans out and, in the end, we’re left with an unremorseful wife and the ever faithful husband.

Rani, effortlessly essayed by Pooja Bhatt who has an all-new fan base after Bombay Begums, seems to follow in the same footsteps. We’re introduced to her as a very family-oriented woman who is struggling to make a place for herself with her step-children as well as her husband who still misses his first wife. Yet, she too cheats on him. If even for a moment, we can forgive her infidelity, she still is problematic. When the scandal of her affair with a married man erupts, she is less concerned about the impact it leaves on her family and is more concerned about how it impacts her role as CEO. To further negate the idea of female empowerment the series initially put forth, her husband doesn’t even bat an eye and rather comforts her whilst drying her hair and reassuring her that she has his full support.

It seems as though the men in this show are saints!

Then comes Ayesha (Plabita Borthakur), who is perhaps the least likeable in the show. Ayesha is a hot mess. A small town girl running away from the prospect of ending up in an arranged marriage, she can only be described as a tornado that leaves disaster in its wake. She uses people who are kind to her and betrays them. She hooks up with her ex-boyfriend despite the fact his girlfriend lets her stay with them when she’s homeless. She then does the same with Ron, who supports her at her most difficult time. Yet she cheats on him with the swanky jazz singer. The narrative around her becomes more problematic when the sexual harassment claims tie in. A character can only be shown to be so naïve to not realize how her interaction with her male senior can be perceived. And yet Ayesha is anything but naïve. So essentially, Bombay Begums leads you down the road of victim blaming before you realize what you’re doing and stop.

The show digs a deeper grave for female empowerment with how the other female leads react to Ayesha’s claims. It is especially disappointing because it begs the question: when will we move beyond the theme that a woman’s worst enemy is a woman?

Rani especially is the most disappointing out of them all. As we learn about her own abuse one would expect to her to be Ayesha’s greatest support. Yet, in a cruel twist, we learn that not only did she know what Deepak was capable of, she enabled his actions by quashing those claims to achieve her position. The only time she decides to speak up, is when it furthers her own agenda. Fatima’s reaction and disbelief that her close friend could do something so heinous, as relatable as it is, is an overused storyline. It would be more refreshing to have a woman actually believe a victim immediately rather than needing more proof.

All in all, Bombay Begums just doesn’t do it for female empowerment. The show basically sends out the message that for a woman to rise, she needs to be uncaring, ruthless, and selfish and only then will she be able to succeed.