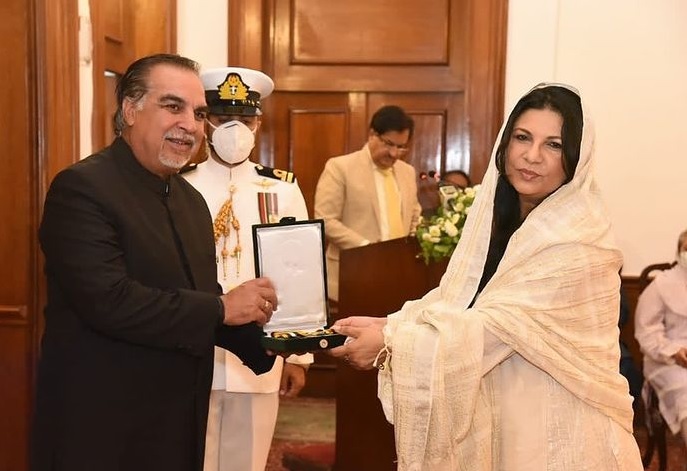 KARACHI: Like every year, various civil awards were conferred upon prominent personalities with notable services in their respective fields, on 23rd March, 2021. The awards aim to acknowledge the efforts these personalities put in to better the position of Pakistan on the world’s stage. However, in an exclusive interview with The Express Tribune, a veteran artist whose career now spans over 35 years, Sakina Samo talked about how the awards can be conferred upon more deserving recipients.

“The journey towards the highest civil honour has not been very easy,” Samo stated “It took me 40 years to get recognized on this level but I do think nothing is stopping women from getting lauded by the government if they have served their country well.”

She went on to add how a lot of deserving people are often not taken into consideration for the award. People who have given their lives to their respective industries and have had longer careers in comparison to some of the recipients of this year’s civil awards. “I personally believe the choice for Pride of Performance is becoming increasingly simple and easy and as a result, a number of personalities who have dedicated their entire careers often go unnoticed,” she said. “It is sad that the government has given such a huge award to people like Resham and Ali Zafar, who in my opinion don’t really deserve it.”

According to the same source, Samo has expressed her joy for the award Bushra Ansari received. Ansari too believes that “there is no discrimination or bias for that matter, as long as you are serious about your work and put in the right amount of effort needed for your work to shine.” Ansari with one of the most longstanding careers in the industry, also stated that it does not mean that one does not have to struggle. “And that applies to all genders across all walks of life, just look at the time it took me to win the honour, you have to put in the effort and it pays, eventually.” Sakina Samo also added that there should be some sort of financial reward alongside the trophy. “There should be some sort of financial reward along with the trophy, such ventures should be incentivized in a better way,” she said.

In an exclusive interview with The Express Tribune, Resham responded to the criticism she received from Sakina Samo, the latter feeling she was undeserving of the civil awards at this point. “Perhaps I don’t deserve any awards or accolades. However, the point to ponder is; do great and senior actors globally give such demeaning remarks towards their juniors?” the actor asked. “May God bless her with more awards, but she should reflect upon the fact that but when someone tries to put someone else down, it shows their own caliber and character, not the other person’s.”