Conferred by Arif Alvi, 88 recipients from various fields received the honor for their unmatched services 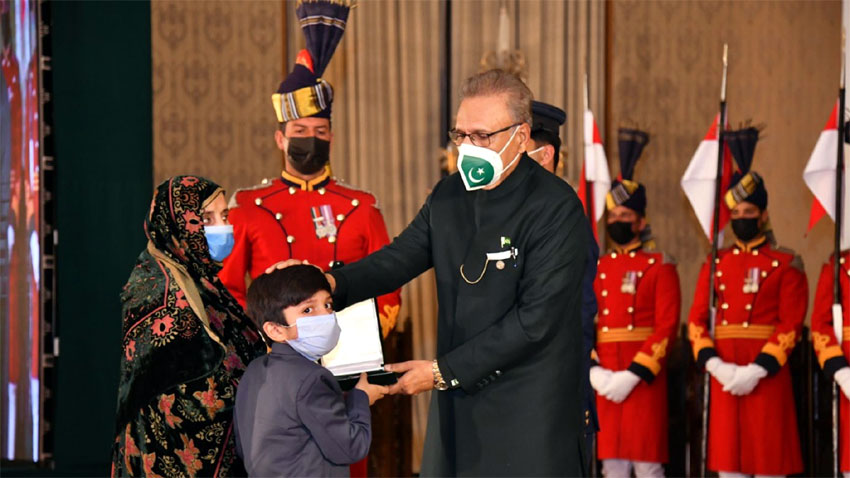 KARACHI: It is imperative that a country celebrates its talent by bestowing upon them national recognition. Pakistan does that through the civil awards it confers upon several of its individuals with unmatched service in the fields they come from. It is done annually, every Pakistan Resolution Day. According to Radio Pakistan, this year, these civil awards included six Nishan-i-Imtiaz, three Hilal-i-Imtiaz, 24 Sitara-i-Shuja’at, eight Sitara-i-Imtiaz, 14 President’s Award for Pride of Performance, one Sitara-i-Quaid-i-Azam, one Sitara-i-Khidmat, one Tamgha-i-Pakistan, 22 Tamgha-i-Shuja’at, and eight Tamgha-i-Imtiaz. These awards recognize various service groups of the society some of which are arts, literature, philanthropy, education, civil services, services as a front line worker in the armed forces, and rather recently, as a healthcare worker too.

Recipients include Sadeqain Naqvi in the field of Art, Abida Parveen for her singing, Ahmad Faraz for his contributions in the field of literature, Professor Shakir Ali for Art along with Zahoorul Haq in the same field of service, and lastly, Dr. Jameel Jalibi for his literary works.

The proud recipients of this civil award include Bushra Ansari, Muhammad Imran Qureshi and Syed Farooq Qaiser in the field of Arts, Prof Dr. Farhan Saif for Education, Sultana Siddiqui for Television Production, Rana Irfan Shakeel Ramay, and Colonel Farooq Shahbaz for their services to the public, and finally Pir Syed Lakht-e-Hasnain for his Philanthropy.

President Arif Alvi bestowed the Award for Pride of Performance on Maulana Tariq Jameel for his services as a religious scholar, Mohammed Ali Sheikhi, Hina Nasrullah, and Ali Zafar for singing, and Indu Mariam Mitha for dancing. Among the recipients from the field of acting/direction were Humayun Saeed, Sakina Samo and Resham. Ruth Wenny Lekardal was given the award for her services to Pakistan, Prof Dr. Khalid Masood Gondal for his role in Education, Naimat Sarhadi for Film, Sarmad Sehbai for Literature, Farhan Mehboob in the field of sports (squash), Abdul Majeed Qureshi for his Philanthropy, and Muhammad Faheem in Arts.

The Hilal-i-Imtiaz was given to Professor Dr, Anwarul Hassan Gillani was awarded the Hilal Imtiaz for his contributions to the pharmaceutical industry. Receivers of the award also include Dr Asif Mahmood Jah and Syed Javed Anwar.

Sitara-e-Quaid-e-Azam was received by Prof Dr. Tariq Shafi this year, while the Sitara-i-Khidmat was given to Richard Geary Horwitz (USA). Jane Teller from Denmark was given the Tamgha-i-Pakistan as appreciation for her services to Pakistan.

Our heartfelt congratulations to the recipients and gratitude for their services. We hope the nation continues to reward gallantry, hard work, and passion.