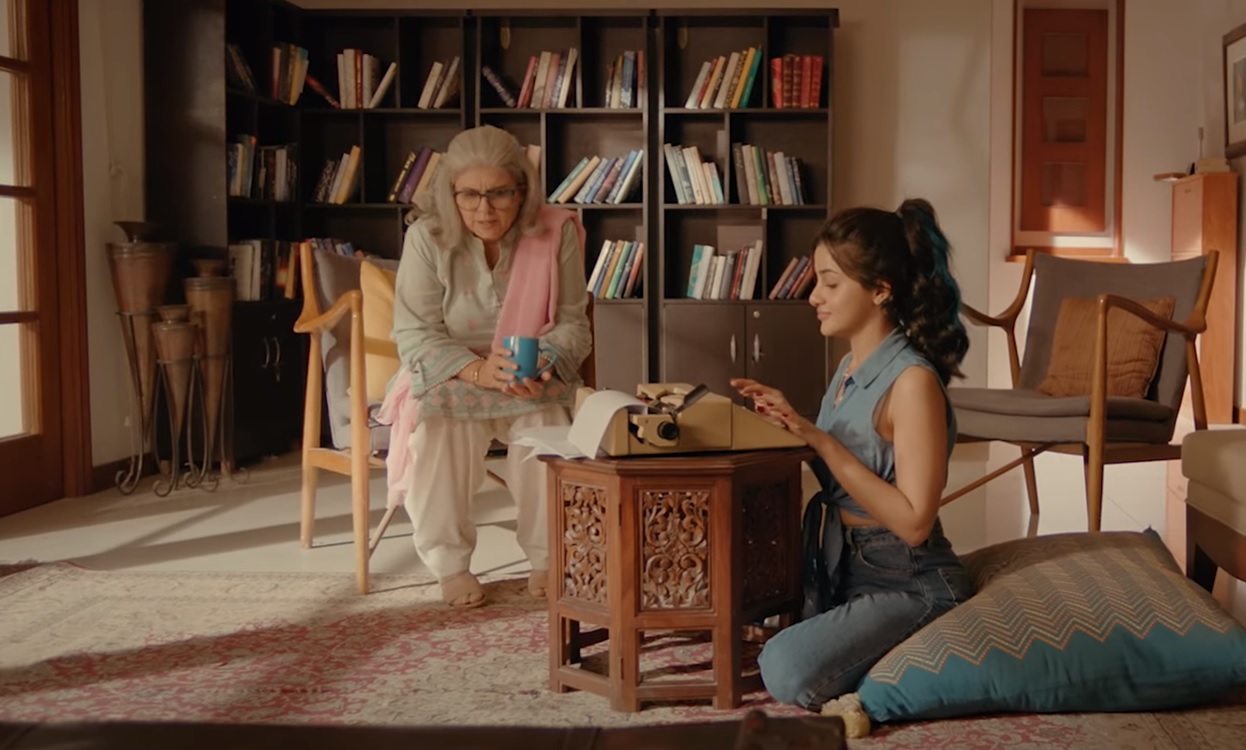 KARACHI: Drama is the first thing that comes to one’s mind upon hearing the words Saas-Bahu. A battle of wits and the epicenter of family politics have been some major characteristics of the relationship mothers and daughters-in-law hold. Living in a society that largely grants power and control to a woman only after she becomes a mother, it is not surprising that a daughter-in-law is seen as a threat – slowly taking that power away from her husband’s mother. However, what if the two decide to put their differences aside and understand the more humanly emotions behind their behaviours? Such a notion has been explored in Daughter By Law, a short film by Digestive Showtime.

The most interesting part of the film is its cast with three of Pakistan’s most admired directors turning actors for the short. While Marina Khan is a splendid actor and has given us some of the most iconic performances in television shows like Tanhaaiyan, Najaf Bilgrami and Aehsun Talish are largely known for their direction. Haris Waheed, who plays the role of Adnan is an absolute natural while Sohai Ali Abro as Sarah embodies the confused, modern daughter by law in the 38 minute runner by Digestive Showtime.

So many of us find Abro’s role relatable because of the gap we feel between ourselves as millennials and the baby boomers. The latter’s decade seems too far off, but once you take a closer look at it, it is perhaps the most colourful one. The music, the disco, the fashion and the quick reshaping post major world wars. Khan (as Farah) embodies the nostalgia that is hidden somewhere in the corner. Many of us enjoy the luxury of technology, but deep down inside we also want the old school exchange of love letters instead of virtual conversations on WhatsApp that just do not hold the same charm.

In many ways, Sarah and Farah represent the merging of two generations, and the will to understand one another. The same is illustrated through Farah’s (Marina Khan) relationship with her son Adnan. She does not quite understand how quickly he is growing. In her head she still wants him to be that child who went to bed at 10 pm. On the other hand, Adnan wants to bring Farah into the new age by gifting her a smartphone and often correcting her ways. He subtly wants to show her how she can no longer control everything.

Armughan Hassan, the creator and director of the film keeps the flow as organic as possible, specially when it comes to the role of Neetu Chacha. None of his dialogues feel heavily embellished. They do not feel out of place like they tend to do with television dramas. Much like the 80s, the strong grasp of Urdu comes back and is also justified. Why does he speak such decorated Urdu? Because Neetu has been passing on letters by an Afsananigar (writer) to the man Farah loved. Later on, when Farah is married to someone else, being the good secret keeper he proves to be, Neetu is sent along with her dowry. Soon widowed, the only person Neetu now socializes with is Farah. He learns her ways, her style of speaking but adds his own sense of humour – a small part of himself.

Rizwan Shirazi’s director of photography and Nauman Kashif’s art direction goes hand in hand. Pastel colours film the frame with a soft golden glow. Everything feels homely, warm and comfortable. During the day, most shots show golden hour, a time we associate with comfort, birds going back home, people getting off work. During the night, soft lights with warm colour temperatures light a comfortable reading room. Things may be formal in the house, but there is a sense of laidback-ness. Some comfort and reliability in the routine the entire family starts to follow.

The exploration of love between two people who feel their life has slipped away reassures many that it has not yet. Their feelings for one another are as strong as ever. And what they do about those feelings, such as looking each other up on social media the second they get hold of technology is no different from two young people falling in love today. Their lives have not yet passed, and it is okay for them to write new stories with new people, and not just on a typewriter.

Daughter By Law is definitely a win for Digestive Showtime. Its natural actors, strong female characters and mood culminates in a lighthearted exploration of old world romance, colours and a family life where everyone seems like an odd goose.