Slogans are not all there is to Aurat March

Devoid of basic empathy, it becomes very easy to villainize Aurat March by refusing to understand where the slogans come from. And this year was no exception... 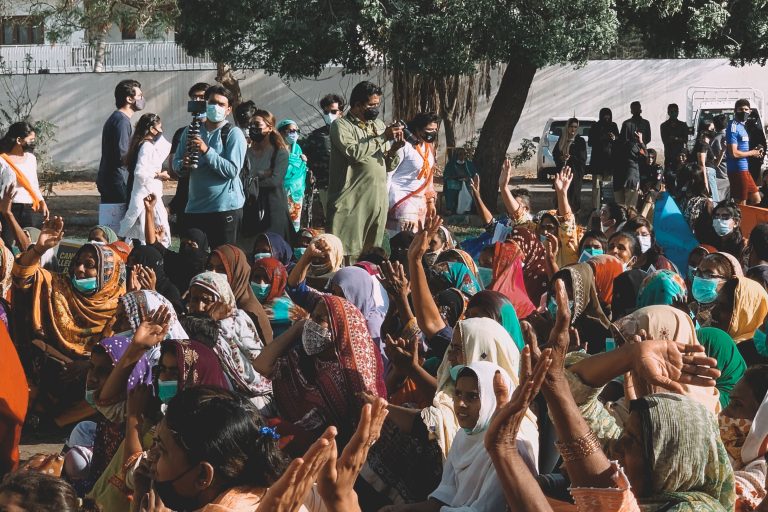 KARACHI: Apart from developing a thick skin to criticism that will follow shortly for their slogans, women attending the Aurat March have various takeaways from the event. Equality – a rather simple word at first glance sits heavy on the chests of those who see their power diluted if presented with a concept of dissolution of hierarchy. Hence, once patriarchy feels threatened, it alerts any and everyone who derives an unfair advantage from it. The unfortunate part is, that most power amongst these groups is extracted by subduing the more vulnerable ones. And once those vulnerable groups step up to point out the discrimination, these very groups refuse to acknowledge their vulnerability in order to keep the denial intact, believing their clash to be with an equally facilitated group. Perhaps, an approach that gives them a better high. A country that somehow does not take anything foreign as a threat and functions primarily on imports, finds it easy to alienate the march by labelling it a foreign agenda.

These pictures show the prime minister’s cabinet of the last 4 regimes. They do make for a lot of political debates but…

It is due to this reason perhaps that these very groups engage in victim-blaming. It allows them to bring the culprit and the victim on a similar pedestal to allow for the former to get away with their deviance. The idea that the world is fair and people get what they deserve may be a strong force behind victim-blaming, but it also happens because the incident abuse highlights the ills of a power dynamic between two unequal individuals. The slogans at the Aurat March are another grasp at these very power dynamics, shaking them to their core. Once that dynamic is put under interrogation, misogyny exposes itself in various forms. And this year was no exception.

At Aurat March 2021, which took place on March 8, the same fragile masculinity found its way to the protestors, seeking to manipulate the entire point of the march out of context and somehow sexualize its slogans as they always have. Another key strategy at play was pitting women against women. The Anti-Aurat March that happened at Karachi Press Club was often brought up in interview questions, asking for an explanation as to why women stand so divided. While the answer to this is internalized misogyny, privilege, and a lack of empathy towards women who have lived different stories, the event called for women to unite and fight for a safer city for themselves.

It is strange how most of the questions posed at women have been the same throughout the years. “What are you trying to prove by marching?”, “Do you not think some of these placards are vulgar?”, “Aurat hi aurat ki dushman hai? (are women their own greatest enemies)”, etc.

The Aurat Dharna through its speeches, skits, and performances not only spoke up for women’s rights but also spoke up for healthcare workers, women belonging to the communities of the fishermen folk of Karachi, students, Shia genocides, etc. Comprising various issues pertaining to women’s education, health, or simply bodily autonomy detailed manifestos had been issued by the Aurat March. However, it is not surprising for most mainstream media to discard all that information and focus primarily on amplifying anything that can even slightly be turned into something sexual.

Some extremely suggestive, and intrusive questions were being asked by male reporters from the attendees. A number of them even refusing to speak with women who could really give the rebuttals that could sit their misogyny down for a decade, and focused mainly on asking male attendees about their opinion on how women seek their fundamental rights.

Several people have taken to Twitter to exclaim over the outrageous intervention of the media when it is supposed to be a silent observer and an impartial documenter.

I politely refused to answer her question

This is after she comes up to me to ask for an interview. I said she could take it of my friend, I don’t want this to be about me. She goes on to say “nai acha lagta hai jab mard bhi screen main aye.” But my friend didnt want do it alone

I tried so hard to stay calm.

Some men came to the Aurat March to bash attendees’ slogans with their own slogans. Somehow it is more threatening for these individuals to see women on the streets, than seeing women murdered, acid attacked, raped, molested, and physically harmed.

Why was this man even at the march? Wtf is potential feminist? pic.twitter.com/UtfLBUGwIo

However, to sum up:

This aurat march i decided to not give a single shit about what men criticising the march. These fuckers really think everything is about them and defending or calling them out just feeds into what their looking for: attention & them thinking its about them.

Attention in itself holds immense power. It seeks time, energy, and the conscious part of its audience’s brain. While completely ignoring and normalizing such behaviour should never be okay, it should however be noted that the more ruptures there are within a car’s machinery, the more noise it makes. Patriarchy is flail completing against a growing community of women that are aware. These women refuse to stop and have taken it upon themselves to further the narrative. The harmful hate speech most misogynists are ever so smartly translating into ‘criticism’ and ‘free speech’ without realizing how uninformed it makes them sound about free speech in general – is proof that patriarchy and misogyny stand wounded. The fragile masculinity that was once the norm now requires attention. Its former audiences now divided between equality and injustice.

People will choose, but the best plan of action from one’s end is clarity, fact-based narratives, and basic human empathy – something that is plenty at the Aurat March. Otherwise, a click away is Google showcasing statistics of crimes against women acquired within Pakistan, and our position globally, on the annual gender equality indices and lists of topmost porn-searching countries. Here misogyny stands proud and progress shamed – and it is ugly!

5 female Urdu writers you should be celebrating