Comment: Why is the entire subcontinent having a ‘pawri’?

Did Dananeer expect her video to gain as much popularity as it did? How long is her fame going to last? 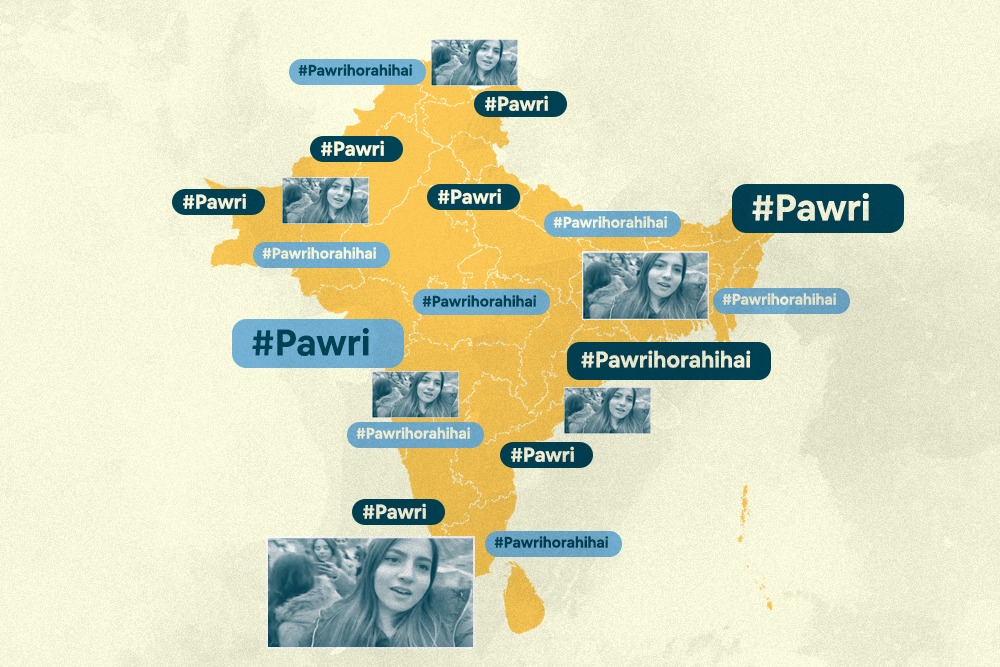 KARACHI: On February 6th, digital content creator Dananeer Mobeen uploaded a short clip of her friends and herself having a ‘pawri’ (party) in the Northern areas of Pakistan. What started off as a mere five-second clip soon picked up pace and became the most talked about thing in the country. Mainstream media, digital media, social media, all seemed to be stuck in the same loop. “Pawri ho rahi hai” became the new tagline for anything and everything.

A swarm of celebrities jumped onto the bandwagon with their own versions of the video. The general public, on the other hand, had mixed reactions to the situation. Dananeer, the mastermind behind the meme, was initially mocked for her accent (who was, in fact, mocking other people’s accent in the first place). A few people came after her for the shallowness of the video, not realizing that the basic intent behind the clip was to create something funny. Dananeer’s intention was to make people laugh. However, what happened next was something that perhaps even Dananeer had not expected or hoped for. The video made its way to India.

As much as Pakistanis may consider Indians to be their rivals, it is true that receiving validation from our neighbours makes us feel better, specially when it comes to the entertainment industry. India is way ahead of us when it comes to content creation, given their resources and population. So when Indian composer, Yashraj Mukhate, created a remix out of Dananeer’s clip, “pawri ho rahi hai” became an entire track. From the kid on the street to Mahira Khan, everyone was dancing to the song. Within minutes, Dananeer jumped from thousands of Instagram followers to hundred thousand, and the number does not seem to be stopping anytime soon.

In what seemed like a matter of hours, the whole subcontinent seemed to have been obsessed with what was going on. From across the border, we saw Deepika Padukone, Shahid Kapoor, Ranveer Singh and even Karan Johar recreate the meme. Indian brands like Durex had entire ads dedicated to the trend.

Which brings us to the question of why. Why was this particular meme so famous? Why was it that out of the thousands of memes created everyday, this particular one managed to make its way across the globe? Why is it that young artists like Asim Azhar took years to reach 2 million followers while Dananeer is on her way to reaching the same goal in less than a month? Why was it that brands like Peshawar Zalmi opted to make her one of the ambassadors for the team when they already had big names like Mahira Khan and Esra Bilgic on board?

Some of us are infuriated by the following that Dananeer has received. You can even use the word jealous. But are we jealous of the fact that a 19-year-old recorded a video with her friends and managed to reach the masses without even trying? Or are we disappointed by the fact that valuable content will never have the same impact on our audiences? How many times has the general public helped spread word regarding an important issue so much that celebrities from across the border wanted to join the cause? How many important issues have celebrities in general chosen to focus upon and appreciate the efforts of a single individual?

So the anger is not directed towards Dananeer at all. She was only doing what she is supposed to be doing. Rather, the disbelief is meant for the audiences who hyped up a regular video to an extent that its creator immediately signed deals with big brands. The frustration is at the fact that our audiences still appreciate mindless content over well-thoughtout, good quality content. Dananeer is a great singer as well, but how many views do her covers get? For sure she puts in a lot more effort into recording those songs than she did in the ‘pawri ho rahi hai’ video. For sure it is the same person in front of the camera in both situations. But then why does one tend to do a hundred times better than the other? And does Dananeer then only remain the ‘pawri girl’ as so many have begun to call her? Does the world even know what other talents she has? Do they want to know?