Twitter has a ball over Allama Iqbal’s sculpture in Lahore 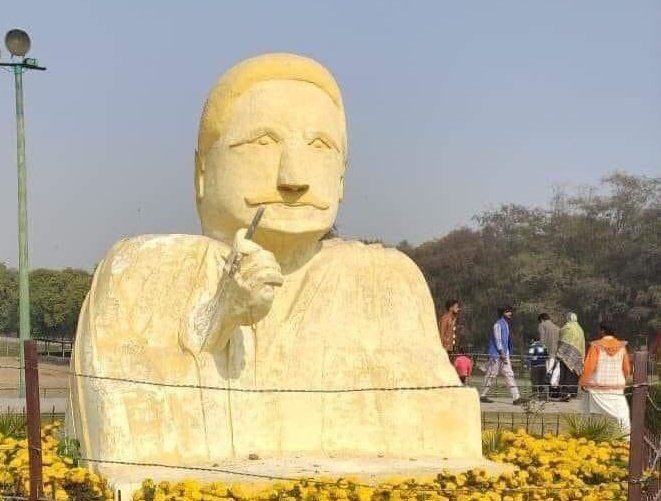 KARACHI: Pakistan woke up to the news of a sculpture of Allama Iqbal in Gulshan-e-Iqbal Park, Lahore. Since then, the news has been trending on Twitter but not for the reasons one might expect. Twitter thinks that the sculpture looks nothing like the poet and has been having a ball over the poor artwork.

A new bust (sculpture) of Allama Iqbal has been placed at Gulshan-e-Iqbal Park in Lahore, Pakistan, and do you think it resembles anywhere to our national poet? Uh, we don't.#AllamaIqbal #Lahore #Pakistan pic.twitter.com/iGvMw23VWi

This sculpture is true depiction of what we did with Iqbal's dream of Pakistan!#Allamaiqbal pic.twitter.com/TXHa4PRRyH

Many have been wondering who the artist behind the sculpture is. While some have joked about the sculptor being an online student, others think the sculpture has been created by a kid.

When you learn making designs from online classes: 🌚#AllamaIqbal pic.twitter.com/FwE2CHrVOd

When you lie on your resume but still get the job#Allamaiqbal pic.twitter.com/DL8mn345QE

WhatsApp is now on Status and Twitter has got no chill

The dissimilarity between a picture of Allama Iqbal and his sculpture in Lahore has some Twitteratis comparing it to a purchase made online where the parcel received looks nothing like the item that was shown online.

One user even pointed out the resemblance of the statue with Shafqat Mehmood, Pakistan’s Minister of Education.

Many Pakistanis assumed the sculptor to be an initiative by the Government of Pakistan and blamed the government for its incompetence and lack of investment towards arts.

Don't have to think hard what corruption and incompetence looks like. pic.twitter.com/N8WhVyJdx4

While the name of the sculptor is yet to be announced, some believe that the project was an initiative by gardeners who did not use any Government funds. The sculptor may not be a masterpiece but is a symbol of honour and respect which the gardeners have for the National poet.

It truly unmasked our society. We started criticism without knowing the fact…

It was made by caretakers of Gulshan-e-Iqbal park as a gratitude for #AllamaIqbal pic.twitter.com/j7ObsUUZ4P

I dunno why people are showing too much aggression against the misshaped sculpture of The Beloved #AllamaIqbal
At least it's a sign of remembrance of the Poet of East.#Lahore #Pakistan pic.twitter.com/Z3Gk8HziWv