Is Wanda a prisoner of her own mental state? Here's what could possibly be going on in the miniseries that has steered the conversation towards mental health 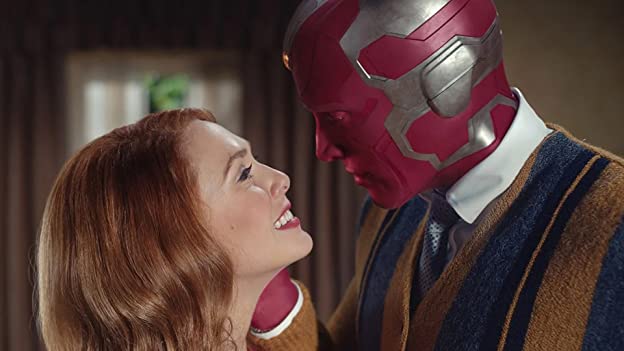 KARACHI: All MCU fans were teary-eyed to see Vision die in Avengers: Infinity War. While his return is a pleasant surprise in the latest WandaVision series, it does not quite sit well with the entire narrative that the universe is following. How did he suddenly come back to life with no memory of his death and no mention of what their life was before they somehow ended up in a suburban neighbourhood happily married?

The answer is simple, alternate reality. For the first time, MCU looks into a superhero’s mental health agitated after taking major hits in the past.

Where do Wanda’s mental health issues stem from?

We didn’t give Wanda enough time to grieve. She had lost her (adoptive) parents at a young age. Discovered by Baron Wolfgang von Strucker, who had been experimenting on humans to further the evil motives of Hydra, Wanda and Pietra Maximoff live their lives as lab rats in Sokovia. Pietro, who had superhuman speed, and Wanda, who can alter reality with telepathic and telekinetic abilities, soon have a turn of conscience and join the Avengers.

Ultron, the evil sentient robot, creates a more powerful body using the mind stone from Loki‘s scepter and aims to transfer his mind into the new body. However, Avengers who escape with this new body, bring it to life after uploading J.A.R.V.I.S. (a friendly AI built by Tony Stark) into its body instead. This creates Vision, who soon falls in love with Wanda Maximoff and she reiterates.

Raised in Sokovia, Wanda is extremely close to her twin brother. However, she has to bid him farewell after Ultron kills him. Soon afterwards, in Captain America: Civil War, Wanda accidentally causes a building to explode. The burden of guilt weighs on her heart strongly especially as she is growing accustomed to life outside the lab. During this time, Vision is her constant source of emotional support.

By Infinity War, Thanos, who is on a quest to obtain all the infinity stones, kills Vision to obtain the mind stone attached to his forehead. With the source of his power gone, the android dies. Wanda is soon snapped out of reality when Thanos snaps his finger, only for her to reappear five years later with her Vision lost. This could be an enormous blow to Scarlet Witch’s mental health. After her reappearance, she possibly does not even get the catharsis she awaited when she attacks Thanos who is from a time several years before the events of the infinity war, saying, “you took everything from me.” To which Thanos replies, “I don’t even know you.”

The universe of WandaVision

Progressing with a lapse of 10 years in each episode, the superheroes hardly aging, living a peaceful life (often revealing their powers by accident to a group of people who remain oblivious), the universe seems a little out of the ordinary. With its sitcom-like treatment, the universe does take into account the comics, such as Wanda getting pregnant and quickly delivering her children in a day’s time. It feels heartwarming at first until the sound from the radio starts to address Wanda asking, “Who is doing this to you?”

Even if it is initially difficult to catch that Wanda is the one ‘rewinding’ reality, by the third episode when she rewinds a scene with Vision realizing there is something wrong with their surroundings, the audience becomes sure. Heartbreakingly enough, it is extremely likely that Vision is simply a figment of Wanda’s imagination and a memory she refuses to let go of.

There are ads in between, such as a toaster by Stark Industries, a wristwatch by Strucker, Hydra, and Hydra Soak bath minerals that appear from time to time. This really gives an insight into what is going on in Wanda’s head. In her subconscious, she holds repressed memories of Hydra, Strucker, and Stark.

In this ‘alternate-reality’, Wanda gives birth to twins, and as she does so, she remembers being a twin sibling to a brother she lost. It is possible that Wanda has created her own twins in the loving memory of her brother. As soon as Geraldine states, “He was killed by Ultron” to Wanda who is singing a Sokovian lullaby to her newborn twins, she makes sure to throw Geraldine out from the world that Wanda aims to keep for herself. Perhaps, this represents her repressed memories resurfacing.

The nosy neighbours who somehow always appear happy and (ironically) ignorant of two superheroes living in their neighbourhood for decades may very well be people from SW.O.R.D. The helicopter with a sword in its logo hints at that. The sound from the radio appears to be of Randall Park, a CIA agent who kept Scott Lang in detention. Either S.W.O.R.D. has penetrated the alternate reality created by Wanda, or are accessing her mind somehow, going all Inception on her, or it really is an unconscious Wanda accessing her happily ever after, refusing to step out of her imaginary world.

The show also introduces Kathryn Hahn as Agnes. But she could just be the witch Agatha Harkness, an MCU character who wipes her twins out of existence and causes Wanda to go rogue. The twins getting wiped out could really be Wanda coming to terms with the actual reality where neither Vision nor his children with Wanda exist, which could be extremely heartbreaking and could shift her character for the worse. We also see Agnes dressed up as a witch in one of the trailers, hinting at her look from the comics.

Another theory suggests Mephisto lurking in the neighbourhood posing as the snobbish Dottie. Mephisto can alter his appearance and in the comics takes a particular interest in the Scarlet Witch. When Dottie states that she has heard things about Vision and Wanda and does not trust the couple, Wanda feels threatened.

What S.W.O.R.D. could really be doing here is protecting Wanda from Mephisto. Wanda, keen on staying in the universe might come face to face with either the evils of Mephisto or simply her own fate. This could possibly loop in Loki and Doctor Strange as Wanda expands her universe.

However, what really seals the deal for MCU this time is their approach to mental health issues. It portrays them as more insidious wars fought internally, often harder than most battles we fight externally in our lives. The WandaVision series tries to convince watchers that trauma does shape our behaviours, whether we choose to confront our mental health problems or deny them.