What were some of the most famous trends of 2020?

From baking banana breads to dyeing our hair at home, here is a round up of things that many of us did this year 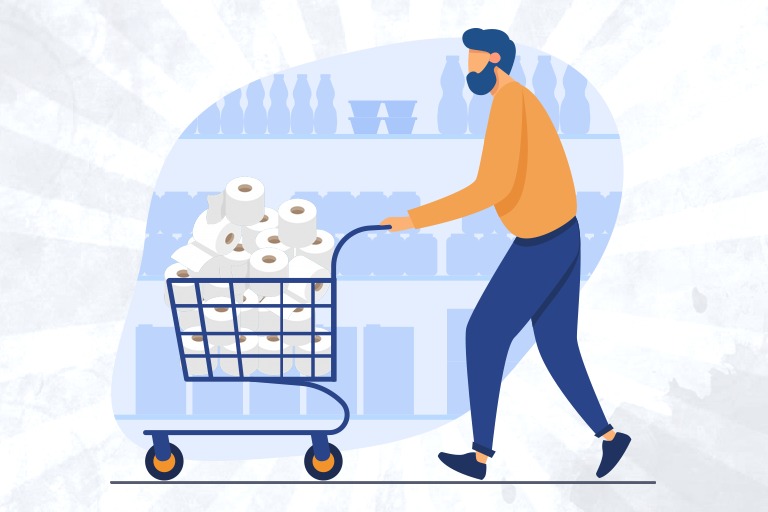 KARACHI: As 2020 comes to an end, many people have been reflecting on the year and everything that happened during it. Safe to say, 2020 caught all of us off guard and introduced changes into our lives which many of us were not prepared for. But the year also allowed us to get out of our comfort zones, experiment, adapt and be creative. While the world shut down and homes became full, people also found a way to keep themselves occupied in new ways. Humans also did some stupid things in their attempt to adjust into the new normal. 2020 also introduced trends which were, quite honestly, far from trendy yet, most of us jumped onto the bandwagon. Let’s take a look at some of the most popular trends from the year.

Okay, this one might not hit too close to home but it was one of the first (and most ridiculous) things to have happened in 2020. Of course, no one knew what to expect from the virus or the lockdown, but who even thought of hoarding up toilet paper? Why did they think the world was going to run out of toilet paper, of all the things? Even if it did, surely the world was not going to run out of water (atleast not within days).

Quarantine had many of us experimenting in the kitchen and trying our hands at cooking. But if you did not bake banana bread at least once during the lockdown, were you even alive in 2020? God knows that poor bananas have never been treasured so much the way they were when banana bread became the new ‘in’ thing. Perhaps it was a way for people to think that they had been cooking when in fact all they had done had mix together a few ingredients and put them in the oven?

Pakistan is home to chai lovers. We live for chai. But the lockdown introduced a new obsession with coffee, and not just any coffee. It was Dalgona coffee, with the right amount of froth and at the right temperature. Day and night we witnessed Instagram boomerangs of people stirring away their Dalgona coffee. Now that it’s winter and actually coffee season, how many people are having Dalgona? Probably not many.

As social gatherings were banned, weddings were deeply affected. The scale of desi weddings specially changed. But it’s not like people stopped getting married. Once humans realized that the virus was here to stay and was not going to go away in a few weeks (as so many of us had initially thought), weddings were shifted to zoom. With just the immediate families present for the actual ceremony, the rest of the guests were sent a zoom link to watch the ceremony live. Of course, this also meant that numerous people were talking together, the aunties were super disappointed on not being able to get a closer look at the bride’s jewellery or clothes, and there was no buffet.

If you managed to survive the nearly 6-months-long lockdown without cutting or dyeing your hair, you must have a whole lot of patience. As hair salons remained shut, cutting one’s hair at home remained the only solution. Any combination of a mother cutting her child’s hair, or a girl cutting her own bangs, or a boy trying to trim his own beard must have existed in every house. Many people also used the opportunity to dye their hair at home because firstly, it is a lot cheaper than getting it done from a professional and secondly, there was no one to judge us in case the experiment went wrong (except our families).

Will we see some new trends come up in 2021? Guess we’ll find out soon.

On #InternationalCoffeeDay, we decided to make a list of our fav coffeehouses

Deepika Padukone and Ranveer Singh are married! Here’s how Bollywood is celebrating