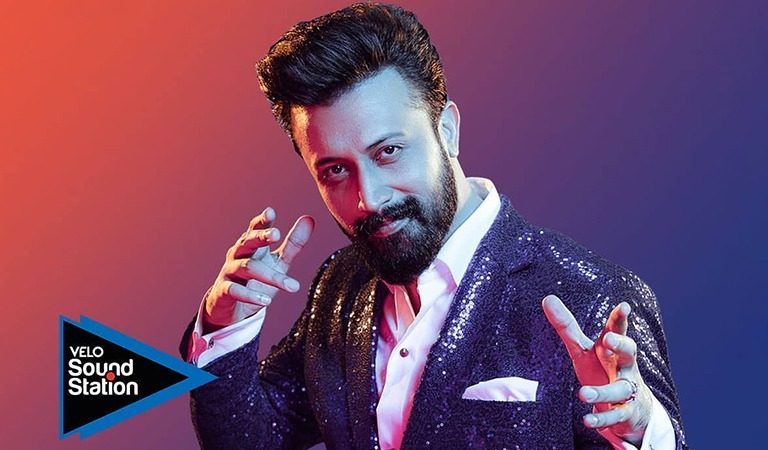 The format of the show is pretty much like Coke Studio or Nescafe Basement, in the way that it has its stage spread out for the singers and musicians, with an addition of a limited audience dancing along to the music. Celebrities like Naveen Waqar and Faizan Haq were also spotted in the audience.

Umair Jaswal opened the first episode of Velo Sound Station with a remix of Alamgir’s ‘Maine tumhari gagar se’. Adding a pop of colour to the stage with his orange embroidered jacket and keeping the energy up with his dance moves, Jaswal took a rather unorthodox approach with the song as compared to the original. While his vocals were strong, the pace and beat of the song were sped up to fit the pop category and almost lost the charm that the original had with Alamgir’s soft vocals.

Natasha Noorani performed Baby Baby, an original song written and composed by Bilal Maqsood. However, the most praised performance came in the form of Kadi Te Hans by Atif Aslam. One of Pakistan’s most popular singers, Atif Aslam proved to be at the top of his game once again. He also contributed towards the additional lyrics and the composition of the song, along with Ahsan Parvaiz.

The show is said to release a bunch of new songs each week, and has artists like Meesha Shafi, Shamoon Ismail, Sajjad Ali and Uzair Jaswal lined up to perform on the platform.