Swipe right to kill and left to save a life? SWIPE is a chilling reminder of where we’re headed

"Without talking to someone or knowing their intent, how can you pass a verdict on their life, that too through a phone screen?!" screams a religious scholar in the animated short film

KARACHI: Religion has been a powerful tool in societies such as Pakistan, and unfortunately has been misused many times by those in power. SWIPE, yet another feather in their cap after Sheher-e-Tabassum, is an animated short film by Puffball Studios, that paints a grim but realistic picture of mob mentality and how it spreads like wildfire, engulfing many.

The film opens with a series of blackouts shifting from one crow munching on dead rotten meat, to another. The blackouts really make the viewer initially wonder what it is all about. They’re distracting, disturbing, and paint the scene with a brush of distress. The blackout can also mean the selective amnesia we have as people and the blind eye we turn to things that are the ugliest around us. On the other hand, the ravens ravaging through the rotten meat suggests how all that we consume has become rotten, making us rotten as consumers as well.

The premise of the film is that an app called iFatwa has just hit the market, people have downloaded it left, right and center, and are now busy swiping their days away. Users get to swipe left for clemency and swipe right to kill. The more right swipes a person has the more ‘Wajib-ul-Qatal’ he or she gets. The reasons behind a person getting featured on the app could be as minuscule as wearing an ‘incorrectly draped dupatta’.

While there is a debate among ministers and religious figures about whether the app should be allowed or not, in the world of this film, people are swiping scores of people to their deaths. “Without talking to someone or knowing their intent, how can you pass a verdict on their life, that too through a phone screen?!” screams a religious scholar on TV, and perhaps that can be said to all of us using any app in real life nowadays. 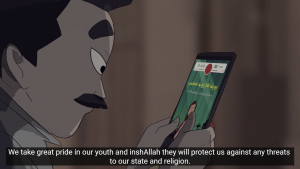 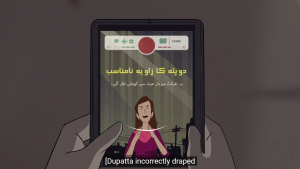 In a few places, the shots feel increasingly long and slow. This is possibly deliberate to make the viewer fully associated with the unsettling life people in the town are living. Some shots also seem claustrophobic, perhaps signaling how suffocating society has become. The colors used are earthy, but not warm. The town is filled with smog and dirt, mirroring the insides of its inhabitants. 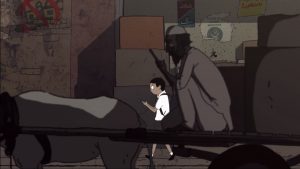 All the people that appear in the story are from middle or lower economic classes, suggesting how iFatwa is only a tool against a common person, by a common person. The rich and powerful are nowhere to be seen, except debating on whether the app should be used or not. The protagonist’s own father is struggling as a tenant at the hands of a landlord who has asked him to evacuate the house.

His father is soon featured on the app, and in his spree of swiping right, our protagonist even swipes right on his own father. Such appears the blinded urge to win the label of ‘Ghazi’ in this film.

The desensitization towards human life, the refusal to associate identity to any person who we feel has sinned, the black and white outlook of sin itself, and how we tend to legalize things for ourselves that are actually forbidden when we believe we are correcting others – these are all the questions explored in the film. 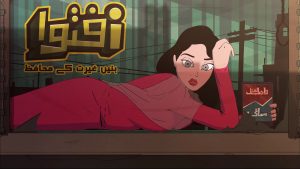 The aforementioned visual is a strong commentary on how a patriarchal society that has an issue with “paan khaati dulhan”, “khushbudaar aurat” and “manhus aurat march poster” still uses a woman’s body to instill a man’s power over others.

While the film amplifies the toxicity of the oblivion that surrounds us, not even for a second does the situation feel unfamiliar. It echoes the fears many have regarding the herd mentality that swallows everyone within its reach. The reflection of barbarism thoroughly inculcated in society is distressing but honest. Several cases of mob lynching in the country come to mind after watching this 15-minute long animated short film.

SWIPE is a chilling reminder of where we’re heading. It is uncomfortable to watch at some point, but that only makes it imperative that we do.