The ‘dick pics’ sign at Aurat march was talking about an important issue: rape culture

Criticism of the poster can be seen as an extension of victim-blaming, says Aurat March organising committee 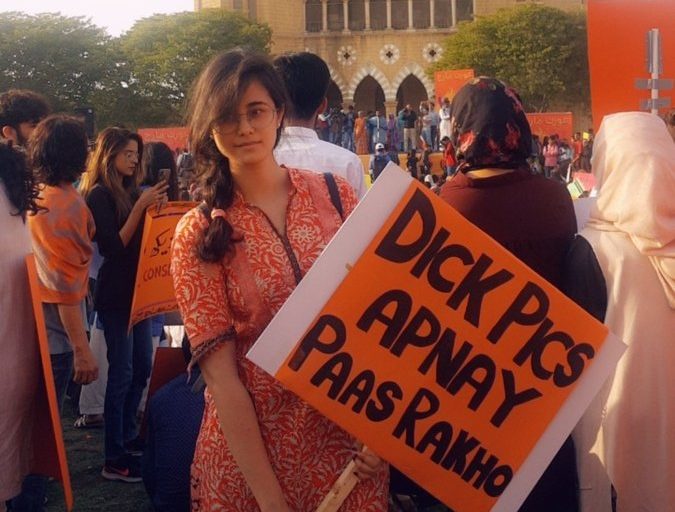 KARACHI: Many signs at the Aurat March, held last Friday, triggered feelings of rage in a lot of people, mostly men. One such poster stated: “Dick pics apnay paas rakho (Keep your dick pics to yourself)”.

Criticism #1: Why was the word “dick” written on a poster?

The poster, pictured-above, had a lot of people frothing at their mouths. Perhaps because they were uncomfortable with the word ‘dick’ aka penis aka male genitalia in the poster.

So the word "dick" is a problem? That's what they send pictures of. So excuse our lacking understanding of moral policing and avoidance of discussion of issues. https://t.co/I0BNz3qZd2

Firstly, for those who don’t know, the unsolicited sending of sexual images or videos from men to women is referred to as “dick pics”. This criticism fails on many points, the primary one being that penis is referred to as “dick” in slang language. And the vulgarity of the gesture made by lewd men on the internet is, in fact, referred to as a “dick pic” in internet culture. In essence, the poster told it like it is: stop sending pictures of your dick.

Secondly, this criticism conveniently washes over the obscenity from a man and pins all the blame on the women who dared speak about it.

In a statement provided to Cutacut, Hum Aurtain, the organising committee of Aurat March 2019, said, “It seems that the use of the word “dick” or the reference to pictures of men’s genitals is somehow more obscene, coming from a woman, than the actual images being referenced themselves, since they come from men, who aren’t held to the same behavioural expectations as women.”

The ‘dick pics apnay pas rakho’ poster was not a vulgar attempt to shock people or make a joke. It’s a stand women are taking against the sexual harassment they face online, and regaining control from such harassers.

A sub-section of Criticism#1, some people are denouncing the issue, saying that it is something that only privileged women with an education take an issue with. But what these critics of Aurat March are conveniently ignoring is the fact that there were posters with slogans written in Urdu and in English both, as well as other regional languages, in the march.

Secondly, it still does not make sense to take offence to the language in which the issue was expressed than the issue itself. Perhaps, you can humour your love for Urdu and hatred for the poster in the following tweet:

Criticism #3: ‘Dick pics’ is a non-issue

Some complained that there are other issues like poverty, assault and rape that should have been addressed.

On the contrary to their misinformed opinion, issues like violence against women were discussed and sloganeered just as widely.

And when this blatant disregard of facts was pointed out to such critics, they chose to stonewall the attendees.

It should be made clear: the act of sending sexual images to women or girls without their consent perpetuates rape culture. It is a violation that should not be taken lightly, laughed at, or brushed off as a ‘non-issue’. It falls under sexual harassment in the online space.

Men & some women going bonker over poster related to dick pics, actually depicts the increase unwanted communication of intimate photos to women without their consent. Dozens of complaints we receive at our helpline everyday are actually THIS! Use brain a little #AuratMarach2019

Journalist Sophia Ankel writes in The Guardian, “I don’t care whether you’re sending your picture as an ill-advised effort to flirt, or worse, a deliberate attempt to scare and intimidate, by forcing someone into a sexual situation with an unsolicited picture, you are reasserting the patriarchal idea that we, as women, are always ready to accept your direct invitation to sex.”

Consent matters, even on the Internet and your DMs (direct messages) on any social media platform.

Hum Aurtain shed light on the wrath of the moral police after seeing the poster calling out online sexual harassers.

“The reaction can be seen as an extension of the same beliefs that lead the families of female rape victims to blame the woman for being raped and tainting the family’s izzat (honour) instead of focusing all that anger solely towards the rapist.

“In a patriarchal society, men are able to get away with violence because women are discouraged from voicing their experiences of violence,” the committee told Cutacut.

“The burden of harassment and abuse is placed on the woman for being in the wrong place, at the wrong time even though the decision to harass or abuse is strictly under the control of the abuser, not the victim,” the statement added.

The statement pointed out that the people who have taken an offence of women addressing the problem of unsolicited “dick pics” publicly routinely blame victims for not speaking up earlier.

“Well why didn’t she say something when it happened?” or “Why didn’t she stand up for herself?” — they are the same people who then criticise the way a woman speaks up when she does, in order to invalidate her story, which is why speaking up is important, and this sign and its exact message is important,” it added.

Here’s what people with a problem with the poster need to know, loud and clear:

“Sending unsolicited ‘dick pics’ is a direct violation of consent. It is an act of sexual violence because it dismisses the need for a woman’s consent. Instead of dissecting the poster over and over, people need to understand that the poster wouldn’t have existed had the problem not existed,” according to Hum Aurtain.

With additional reporting by Shayan Naveed