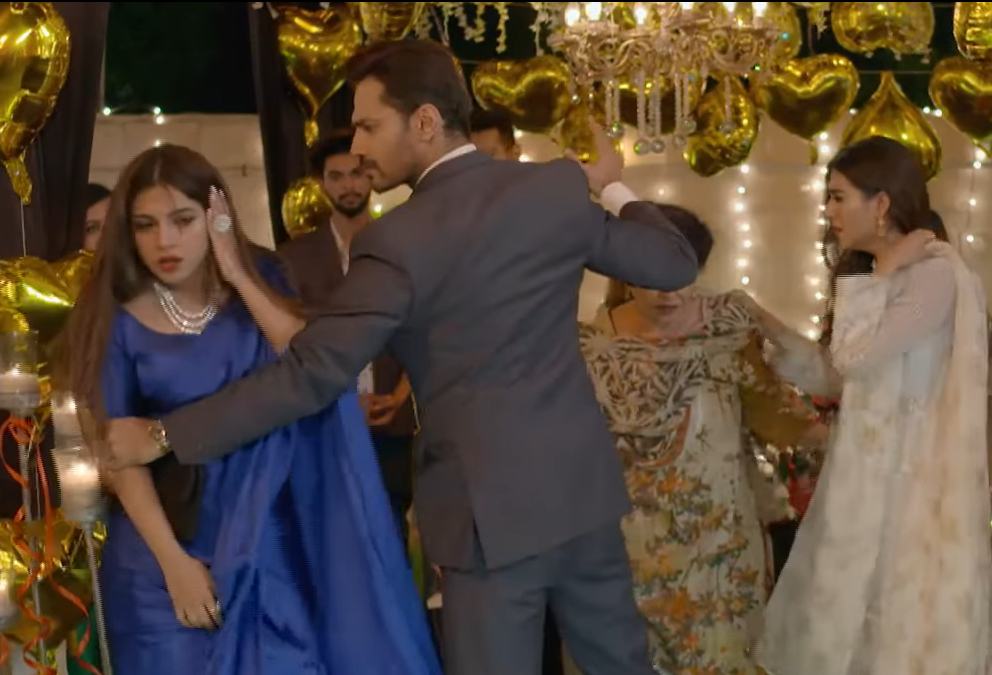 KARACHI: Every Wednesday night, it becomes clear that no matter how many times we try to pen down our thoughts about the 8 pm drama on Hum TV, we will never be able to make sense of how the content was approved in the first place. We have already spoken about the emotional abuse portrayed in Mohabbat Tujhe Alvida but the extent of violence that was shown in the latest episode came with no warning. For many viewers like myself, the drama hit a new low once it casually displayed physical violence by both, men and women, on 11th November.

In case you have no idea about what happened, let us give you a quick recap and save you the torture of having to watch the drama. The episode reached its climax when Ulfat (Sonya Hussyn) returns home from one of her fancy parties only to find out that a surprise party had been arranged by her family to celebrate her 11th anniversary with her husband (Zahid Ahmed). After Ulfat had shown little to no interest in celebrating the occasion and switched her phone off while she was away, her husband chose to cut the cake with his second wife. Exactly at this point, Ulfat enters the scene and throws a fit over Shafaq (Mansha Pasha) taking her place. After a verbal argument between the husband and first wife, Ulfat notices Shafaq wearing the earrings which Shahan had bought for her but Ulfat had rejected. Clearly not in her best state of mind, Ulfat picks up a knife and demands that Shafaq takes the earrings off or she will chop off her ears (Utaaro warna main iss keh kaan kaat dungi). As a reaction, Shahan raises his hand to hit Ulfat but stops mid air.

Did I mention that all of this was happening in front of a crowd of atleast 50 guests? All of whom seemed to be enjoying the show as bystanders? To top it off, Ulfat who was pointing a knife at another woman five seconds ago immediately becomes the victim. “Tum ne sub keh saamne mere upar hath uthaya” (you tried to slap me in front of everyone) she says to Shahan. To which Shahan responds, “Maara ussay jata hai Ulfat, jis ki koi haisyat ho, koi aukaat ho…Meri nazron main tum iss qadar girr gayi ho keh tumhari itni bhi aukaat nahi rahi keh main tumhe maarun. You don’t even deserve to be slapped.”

The 7 minutes long scene left the viewers baffled who were, first of all, caught off guard by the extent of abuse displayed by the characters. Secondly, where do we even star from when trying to break down the scene? When does the episode get out of hand? Is it when Ulfat picks up the weapon or was it weeks ago when we saw two characters trade off a third one and then constantly manipulate him? Some viewers have also taken to social media to remind Hum TV that Pakistan is a country where domestic violence is a common practice and to justify the act with dialogues like Shahan’s is highly irresponsible.

@Humtvnetwork Shahan from muhabbat tujhe alvida JUSTIFIED physically abusing his wife Ulfat on the show last night. In a country where women are KILLED by domestic abuse, it is HIGHLY IRRESPONSIBLE for such a dialogue to be aired. (1)

Mohabbat Tujhe Alvida has time and again glorified abuse in the name of love. It has romanticized the concept of manipulation and coercion for weeks. But the recent episode normalized violence by women and against women in a family setting. There was also a child standing in the background throughout the scene in question. Did the team think of the consequences that witnessing violence can have on children, even when it is only being acted out? Does it make it alright for families at home to watch this scene with their kids?

Perhaps what many will never be able to understand is how a talented cast who otherwise seems to make sensible choices agreed to be a part of the project. Mansha Pasha, specially, who is vocal about issues in Pakistan, does not utter a word as Shafaq. She is an expressionless, opinion less bystander who could have a knife shoved in her face but would still not stop acting as the good wife.

But then, who is a good wife? One who stays quiet even when she is attacked? And who is a good husband, according to the drama, then? One who does not hit his wife? Is abuse justified when it is being practiced by one woman on another? Should the audience only be concerned when the man raises his hand on his wife?