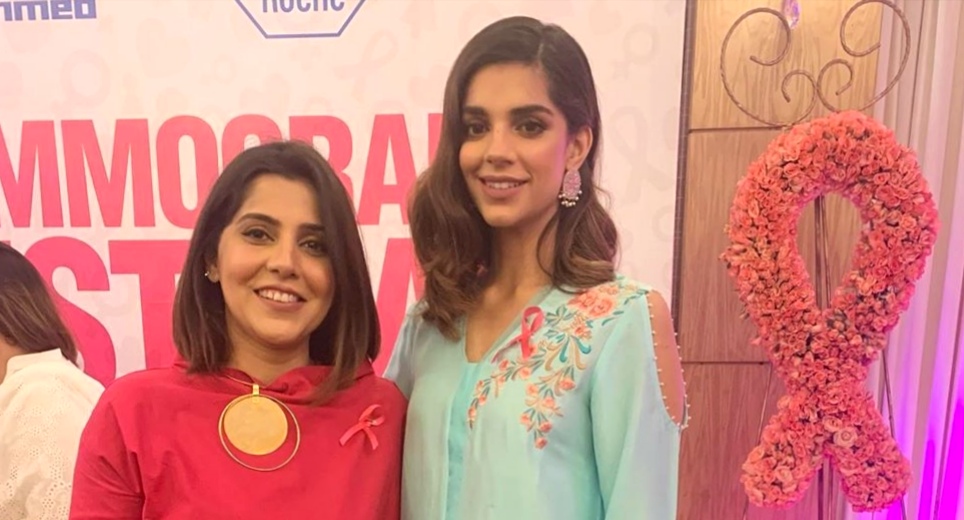 KARACHI: Breast Cancer Awareness Month is observed in October every year. It is an international health campaign organized by major breast cancer charities to raise awareness around the disease. It also aims to generate funds to support the cause in terms of research into its cause, prevention, diagnosis and cure. One in nine women suffers from the disease worldwide. Only those affected by it know the pain and struggle. Early diagnosis is recommended for women, particularly those above 40. Hence, breast cancer survivor Asma Nabeel and other women associated with the cause came together to raise breast cancer awareness.

A panel discussion, ‘Mammogram Must Hai,’ featured breast surgeon Dr Rufina Soomro, director-producer Misbah Khalid, journalist and cancer survivor Khursheed Haider, DGM marketing Gul Ahmed Quratulain Sohail, MPA Dr Seema Zia and actor Sanam Saeed. Moderator Asma Nabeel pointed out that ‘#MammogramMustHai’ is a step ahead in the direction. It is not just about raising awareness but providing an action-oriented solution. Instead of PKR 7,000, women can now have their mammogram done in just PKR 1,000. It is a joint effort of Roche and Gul Ahmed to promote early diagnosis in Pakistan.

#mammogrammusthai a panel discussion where empowered females with a vision came together to discuss the issue beyond awareness. The panel discussion was the part of the campaign initiated by Roche and Gulahmed to promote early diagnosis. Where you can get Rs 7000 worth of mammogram in just Rs 1000 from Shaukat Khanam diagnostic center. The coupons are available on Gulahmed outlets. I am so thankful to Allah that He has given me strength to moderate today’s session. We tried to create discussion beyond awareness and motivation. The urge and need of the time is that we need to have National Cancer Registry, we need to have breast cancer control programs implemented in all provinces, we need to have a full system around breast cancer. We need to have a sense of urgency around this matter as the women of my country are dying everyday and the number is increasing everyday. I urge all the females to stand together and start talking about your health right and ask for reforms from the Govt especially in case of breast cancer. Keep on spreading the word. Keep on talking about it. Keep on asking for your right to live. #mammogrammusthai #breastcancerwarrior #paneldiscussion #Roche #gulahmed #shaukatkhanum #breastcancerwarrior #cancerjourney #chapter02 #mrssaminaalvi #sanammoody #seemazia #asmanabeelan #moderator #Allahiskind #nationalcancerregistry #breastcancercontrolprogram @alvisamina @misbaa.khalid @khursheed.hyder @dr.seemazia @sanammody @rufinasoomro @imrankhan.pti @dr.arifalvi

“When (cancer) cells in the breast step out of the body’s control mechanism, they start creating a lump. The lump can extend to other parts of the body too,” informed Dr Rufina Soomro. Speaking of myths associated with breast cancer, the expert highlighted that there are about 30 myths. However, sidelining all the myths, she pointed out that biopsy is extremely important before undergoing any treatment. She asserted that any woman can be a potential carrier of the disease, irrespective of any family history. Hence, they should get it checked no matter what.

“7 per cent of my patients have been young women under the age of 30,” she added. “There are no side effects of a mammogram. It diagnoses cancer at the earliest possible stage which will make it easier to treat.”

Moving on, Misbah Khalid shared that cancer took a lot of lives in her family. This is the reason she has been working towards the cause so that fewer people suffer from it. She feels that women, as well as their male counterparts, need to be more open about it. Unless they talk about it, they can’t get rid of it. DGM Gul Ahmed, Quratulain Sohail noted that it is the brand’s responsibility to make sure the fabric is not harmful to their clients.

On the other hand, Khursheed Haider, who is a cancer survivor herself, shared how traumatizing it was for her to receive the news when she was first diagnosed. She admitted that it was also her fault to delay the treatment, assuming she will be fine without it. Besides, she highlighted that there are 100 per cent chances one would get it back despite the treatment. Nonetheless, a woman emerges stronger than ever once she heals from it.

Sanam Saeed, who joined the panel a little late, also gave her two cents on the subject. She lost her mother to breast cancer and realizes how important early diagnosis is. She revealed that her mother was not overweight; in fact, she was an athlete. Sanam also had her mammogram done recently and urged other women for the same.

“Breast cancer is something you have to take responsibility of yourselves,” she noted. “You can’t blame time, doctors or genetics. After 40, every woman has to get it done. It is best to find out beforehand and cure it rather than running away from it. It is very stupid to not get it done due to fear of being diagnosed with it.”

Breast cancer awareness month is here for you to take out just 🖐️ minutes for a thorough self examination. If you are 40 and above it's time for an annual mamogram 📢. If you are a high risk candidate due to cancer running in the family like myself then you need to start your annual mammograms at 35. 💕 Pakistan has the highest rate of breast cancer in South Asia, amongst women 😔. We can't cure it yet, but we can prevent it through early detection 👊. Taking precautions and being diligent is better than being fearful or irresponsible for your own well being 💯. Sending love and well wishes to all you♀️. Promise me 5 min apnay naam 🙋🏽‍♀️🤗 #pledgewithme Visit @shaukatkhanum for more details.

Lastly, Dr. Seema Zia raised that even if we succeed in creating awareness around breast cancer, we don’t have enough equipment to cater to those women. Not enough to cater Karachi even, let alone the country. “There is not even a single hospital just for women,” she asserted. “Hospitals have small wards catering to breast cancer but not proper departments.” She maintained that she would try to put forth a resolution for mammogram in the assembly.