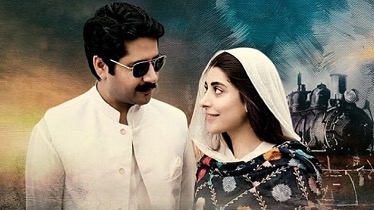 KARACHI: It is raining dramas this week and the latest to go on-air is TV serial Mushk. Starring Urwa Hocane, Imran Ashraf, Momal Sheikh and Osama Tahir in key roles, the play is anything but a cliched story. As Imran Ashraf, who is also the writer of the play, told Cutacut in an earlier interview, every character has multiple layers. It is about love in all forms and the first episode reflects that.

The drama opens in a rural setting as Mehek (Momal Sheikh) returns home after two years. Mehek’s grandfather blindly trusts her and does not deny any of her wishes. She brings along another young woman Guddi (Urwa Hocane) and a newborn. To present the child as Guddi’s which is, in fact, her own, Mehek begs the former to maintain her secret. Guddi, on the other hand, is very outrageous and is probably doing this for money.

Urwa returns to the small screen with Mushk and is a treat to watch as Guddi. Imran Ashraf as Adam, who we do not know much yet, is excited to see Mehek after long but the two haven’t met yet after her return. He is charming and doesn’t talk much but his face reflects how he feels. One can safely assume that he is probably in love with Mehek. However, we learn that she got married to someone else, Shayan (Osama Tahir), who is also the father of her child, while she was away.

Shayan is presently behind bars and tries to escape but fails. He is restless and in love with Mehek but we are not sure if she is aware of his situation. Other key characters who left an impact in the first episode include Zara Tareen, Mehek’s curious aunt-in-law. She is tired of her ailing husband, played by Hasan Ahmed, while she is insecure because of the dominance Mehek enjoys in the household. Sehar Khan looks promising as a young woman in love; she plays opposite Raza Talish.

Mushk is not a run-of-the-mill drama and is far from the kind of stories we see on local television. Director Aehsun Talish of Suno Chanda fame has done a brilliant job in terms of execution. It does not have saas-bahu conflicts or over the top performances. It is subtle yet impactful. The dialogues are deep and meaningful while each character has a mystery to them. All of it hints at an interesting narrative that drama serial Mushk is yet to unfold.