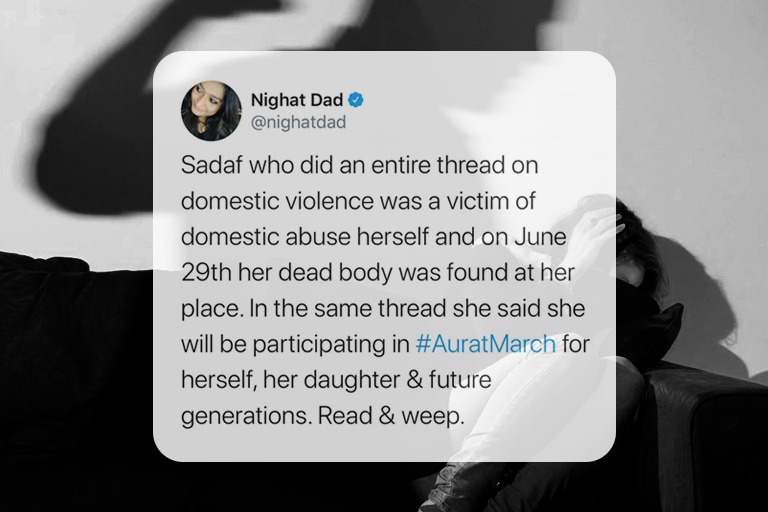 At the beginning of this year, Sadaf Zahra shared a thread on Twitter about domestic abuse, ending it with vowing to attend the Aurat March for herself, her daughter and future generations. Today, it has emerged that she was found dead at her house and her husband, Ali Salman Alvi, a journalist, has been arrested.

”Before getting hitched, we’re lectured about spending entire life ahead with compromising. We are instructed to keep personal matters to ourselves. But what if the matter consists of abuse, violence, curse and toxic relationship,” she had said in a tweet dated January 7, 2020.

“Domestic violence is NOT a private matter. Call out people on it,” she further urged.

I wasn’t in favour of the #AuratMarch coz of the reasons.. But now I need to march for myself, for my daughter, for future generations..

The incident took place on June 29 in Rawalpindi’s Yousuf Colony, where the police has arrested Alvi, after Zahra’s sister registered an FIR, reported Dawn.

The victim’s sister alleged that Alvi called her from her sister’s phone at 2pm saying he was “ruined” and the victim, identified as Sadaf Zahra, had “done something.” She said upon going to house with her mother, they found Zahra’s body hanging from the ceiling fan of her bedroom with a bed sheet tied around her neck.

She further alleged that her sister was a victim of domestic abuse and was beaten up by Alvi on multiple occasions.

According to Dawn, the police arrested Alvi on the day of the incident. The autopsy report is still awaited.

Rawalpindi Police is on it, a case was registered on 29-6-2020 against nominated accused; Ali Salman Alvi and he was arrested the same day. Investigation is underway in supervision of SP Potohar. Frequent follow-ups are taken by CPO Rawalpindi. Merit and Justice will be ensured. pic.twitter.com/P4jkXZPSAc

#JusticeForZahra trended on the top of Pakistan’s trends for Twitter, as people pointed out the Zahra had tweeted a thread on domestic violence – a likely cry for help.

Sadaf who did an entire thread on domestic violence was a victim of domestic abuse herself and on June 29th her dead body was found at her place. In the same thread she said she will be participating in #AuratMarch for herself, her daughter & future generations. Read & weep. https://t.co/jFUFK4iHts

A Twitter user, claiming to be Zahra’s friend, wrote a thread on Twitter on what happened between Zahra and her husband, detailing a harrowing and heartbreaking tale of infidelity and abuse.

I am gona tell the tragic tale about my dear friend @SadafZNaqvi , how she was trapped into marriage by a thug , who killed her in the end. His name is @alisalmanalvi . #JusticeForZahra #AliSalmanAlviMurderer #Thread #auratmarch #DomesticViolence #domesticabuse pic.twitter.com/ATXk0yIiHr

Meanwhile, here’s how people are reacting to the news on Twitter:

This is heartbreaking. I don't have the words. https://t.co/Fi3QDRimGi

Our society is a nightmare for women. Only silver lining is that many brave young women are becoming more vocal against such abuse. More power to them!

Where are the men who insisted that feminism has gone too far? They should hang their heads in shame today. https://t.co/7GnidbPy6L

we think when someone is vocal & knows about the harms & ills of this world they also have the means to protect themselves from them. but that protection DEMANDS societal & state support & intervention. he is in jail. but shes in her grave. we are too late #JusticeForZahra

#JusticeForZahra .. the woman who put this thread for attention on 7th January has been killed by her husband @AliSalmanAlvi … look what we ignored again 💔 https://t.co/69mESG8b0V