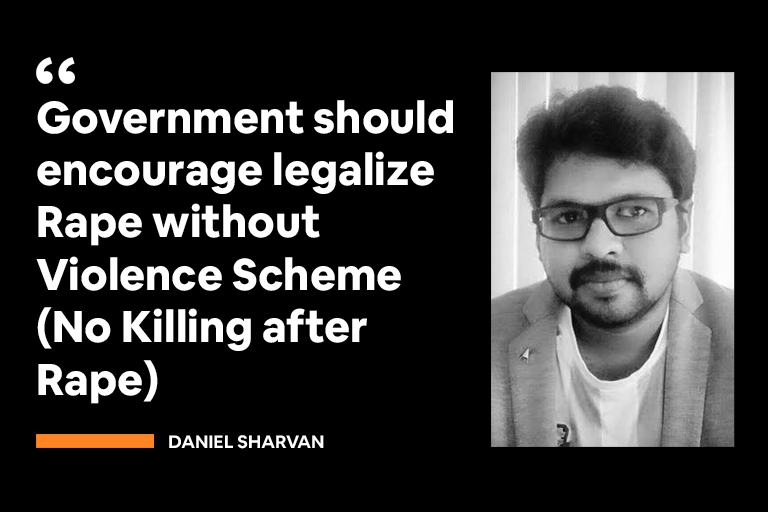 KARACHI: A self-proclaimed filmmaker Daniel Shravan has had Twitter’s blood boiling after posting a series of messages to his social media account. He basically posted about a rape-without-violence scheme that in his head seems to be the answer for rape victims to avoid being harmed or killed after the rape. The filmmaker was giving his two cents after the case of Priyanka Reddy came forward.

Read: After being raped and killed, Priyanka Reddy’s name has been searched ‘8 million times’ on adult websites

According to Shravan, if rape victims participate in the rape by providing their rapist with a condom then the chances of them being met with a murderous aftermath will be lowered. But wait, it doesn’t end there; he continued to suggest that rape isn’t a serious thing: “Rape is not a serious thing, but murder is inexcusable,” before totally losing the plot and suggesting to legalize “rape without violence” for the safety of victims.

News 18 reported his suggestions and some of these include educating girls above 18 on rape i.e. to teach them not to refuse the sexual advances of men. “‘Nirbhaya Act’ can’t control violent rape so women take their own protection in their own hands and carry condoms to give to the rapist,” was another one of them and last but not the least, he compared rape to murder and said that murder is wrong but rape is a minor thing that can be corrected.

The filmmaker said a lot more things and he is only being slammed for them on Twitter.

Whoever this Daniel Shravan is: needs medical help, maybe some heavy duty whacks up his butt, will help him clear his constipated mind.
Infuriating little prick. https://t.co/z8WVpClKTC

Ideas going around.
Some of this content is in Telugu. Basically the ideas these men have given is – cooperate and offer condoms to prevent murder after rape, women’s organizations are the reason for rape.
Rape is not heinous, murder is. pic.twitter.com/2eqhrQA02T

What is "Rapes Without Violence?" .
And this guy is not some anonymous profile.
He is a movie Maker goddamn it.#danielshravan pic.twitter.com/RefqsdI5I9

I'm Sad for his mother https://t.co/ObR0VgjE2t