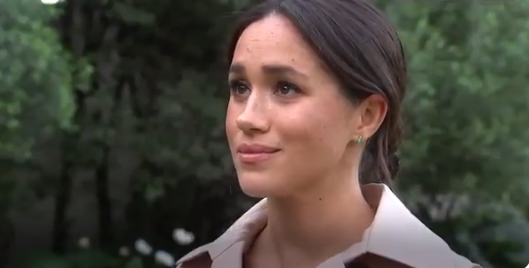 KARACHI: In a recent clip revealed from an ITV documentary filmed on Prince Harry and Duchess Meghan Markle titled Harry And Meghan: An African Journey, Meghan gave an emotional response to a question that has captured the hearts of thousands online.

Journalist Tom Bradby said to the Duchess, “He’s (Prince Harry) obviously very concerned about protecting you from what he felt his mother go through. It’s obviously an area one has to tiptoe into very gently. But I don’t know what the impact on your physical and mental health of all the pressure that you clearly feel under,” which initiated a sadness to well up in her eyes and an awkward smile forcing back tears.

In response to the personal question she stated, “I would say … any woman, especially when they’re pregnant, you’re really vulnerable, and so that was made really challenging. And then when you have a newborn, you know. And especially as a woman, it’s a lot,”  the Duchess proceeded to thank the journalist for asking her about her well-being and opened up about how not many people have asked her that question,“So you add this on top of just trying to be a new mum or trying to be a newlywed. It’s um… yeah. I guess, also thank you for asking, because not many people have asked if I’m okay, but it’s a very real thing to be going through behind the scenes,” she added.

The clip concludes with the journalist asking her if she’s trying to say that it’s really been a struggle to wish she sorrowfully replies “Yes.”

Users on Twitter have been nothing but empathetic and have voiced their feelings online.

I’m crying…I feel for her- I don’t even like going to the grocery store because….people; I can’t imagine being her and being constantly scrutinized and criticized and compared.

You can see the pain in her eyes. The Brits are fortunate to have Meghan. She is a gem.

Aww, a very touching moment. She doesn’t deserve what is coming at her- no one does- but especially during and after pregnancy, while trying to figure out your footing in a new marriage. It’s alot in general, but under the cruel spotlight of the crass upper class and media- 💔.

I just really hope God will handle everyone that has tried to humiliate and destroy Meghan for their own enjoyment. Hope they live their worst and most feared nightmare on their lives soon. Amen!

She is even scared to say what she is really going through. Having to give general statements for fear of being attacked for complaining the interviewer says it for her.