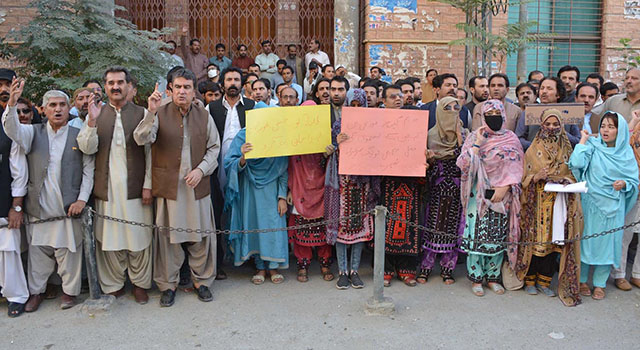 KARACHI: Reports of harassment and blackmailing at Balochistan University came to light on social media and in news reports on Monday. In a recent report by Dawn, the Federal Investigation Agency (FIA) has interrogated three officers of the University of Balochistan in relation to harassment.

This isn’t the first time the FIA has been alerted about harassment related concerns at the university. About about a month ago, they received a request by the Balochistan High Court (BHC) to investigate the case.

Dawn reports that CCTV cameras were installed in secret and unknown locations such as bathrooms and smoking areas on campus. The footage was then used as a tool for blackmailing students that led to sexual harassment.

Protests against this case erupted inside the Balochistan University campus on Tuesday. The student led organisations that held these demonstrations urged the university administration to hold the accused accountable. Students of other universities have also held protest since in an attempt to end sexual harassment.

Users on social media have been protesting against this heinous crime using the hashtag #BalochistanUniversityScandal.

Before this govt should take strick action against UOB's Scandal culprits. Female education tendency is already very low in Balochistan and after such Scandal I do not think we will be able to get such amount of females in Universities.

The scandal in the UOB has revealed that there is a dire need to develop a robust anti-sexual harassment mechanism. The govt of Balochistan should establish a body through which women can file complaints of sexual harassment they face anywhere, be it govt offices or universities https://t.co/2YmT5LvIPZ

We aren’t even secure in our educational institutions.#BalochistanUniversityScandal

The balochistan university scandal is only coming to light now. I have no doubt that if we dig deeper it will turn out to have been going on for years and will by no means be limited to this varsity. Will stay on this issue.

Administration of Balochistan University had been surveilling, secretly recording videos of male & female students & then blackmailing them on the basis of those videos while using 6 cameras that were secretly installed at various spots in the university. https://t.co/vKsYjDZJy5

Let's stand in the support of thousands of Baloch students who are speaking out about sexual harassment in #UOB .
We want the culprits of University of Balochistan to be arrested by govt.#StopHarassment#BalochistanUniversityScandal#SaveBalochGirls#SaveUOB

I even don't know from where to begin! People think education is answer to all social evils but here in a university heavily loaded with Security Force the most senior level management, VC and Professors are involved in Sexual harassment of students https://t.co/3QWxgFJGZ2

Students of the University of #Balochistan protest against the blackmailing and sexual harassment scandal. They demanded justice and removal of the VC of the university. https://t.co/FsZHSg3KLf